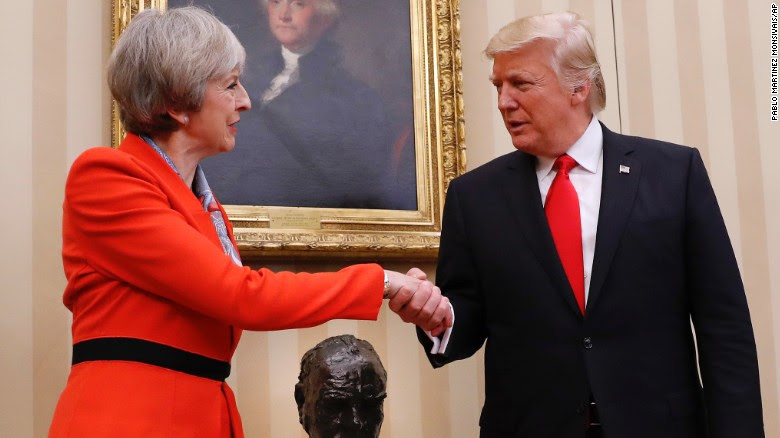 
The extent to which US President Donald Trump’s arrival in the White House is already changing the political weather is shown by comments made yesterday Thursday 26th January 2017 by Britain’s two most senior ranking foreign policy officials.

Britain, alongside the US and to a lesser extent France, has been at the centre of the US-led ‘regime change’ alliance which has dominated Western foreign policy since at least the mid 1990s.

Not only have the British been the US’s allies in every one of the US’s ‘regime change’ projects and wars – including the wars in Yugoslavia, Afghanistan, Iraq, Libya and Syria, and the various ‘colour revolutions’ in the republics of the former USSR and Eastern Europe – but the clearest expression of the doctrine behind the ‘regime change’/’democracy promotion’ policy was made by former British Prime Minister Tony Blair in 1999 in a speech in Chicago.

For the British, Theresa May’s repudiation of the ‘regime change’/’democracy promotion’ policy therefore marks a fundamental reversal of a long established policy, which they played a key role shaping.

By way of example, Theresa May’s media handlers ensured the British media gave the one comment in her speech about Russia a disproportionate amount of attention

When it comes to Russia, as so often it is wise to turn to the example of President Reagan who – during his negotiations with his opposite number Mikhail Gorbachev – used to abide by the adage “trust but verify”. With President Putin, my advice is to “engage but beware”.  There is nothing inevitable about conflict between Russia and the West. And nothing unavoidable about retreating to the days of the Cold War. But we should engage with Russia from a position of strength. And we should build the relationships, systems and processes that make cooperation more likely than conflict – and that, particularly after the illegal annexation of Crimea, give assurance to Russia’s neighbouring states that their security is not in question. We should not jeopardise the freedoms that President Reagan and Mrs Thatcher brought to Eastern Europe by accepting President Putin’s claim that it is now in his sphere of influence.

In reality this is a purely ritual comment – simply restating established policy, and doing so moreover without passion or conviction – which Theresa May was obliged to make in order to give herself political cover for the really big announcement in her speech, which was the abandonment of the ‘regime change’/’democracy promotion’ policy, which she made earlier in the speech.

Without it the British political establishment – which has up to now been united behind the ‘regime change’/’democracy promotion’ policy – would conclude that she had sold out.

The fact that Trump is talking to Putin tomorrow shows that he at least is paying no attention to it, and nor should anyone else.

Whilst Theresa May was giving up on the ‘regime change’/’democracy promotion’ policy in Philadelphia, British Foreign Secretary Boris Johnson was putting that in practice in London, where he made the first public admission by a British minister that Syria’s President Assad is here to stay.

Boris Johnson has conceded that President Assad should be allowed to run for re-election in Syria, a reversal of British foreign policy on the eve of the prime minister’s visit to Washington.

The foreign secretary said Britain would have to “think afresh” about how to handle the Syrian crisis in the light of Russian intervention and Donald Trump’s election, abandoning its longstanding position that Assad must step down. Mr Johnson said that he, like Mr Trump, was open to working with Russia to defeat so-called Islamic State, another sharp policy reversal.

“It is our view that Bashar al-Assad should go,” he told the Lords international relations select committee. “It’s been our longstanding position. But we are open-minded about how that happens and the timescale. I have to be realistic about how the landscape has changed. It may be that we will have to think afresh about how we handle this. The old policy, I am afraid to say, does not command much confidence.”

Mr Johnson said that he still hoped for a “democratic resolution” in Syria which could include a UN-supervised election allowing the country’s displaced millions, mostly Assad opponents, to vote. Asked if that meant allowing Assad to contest the vote, he replied: “Yes.”

In passing, the same article in The London Times explains who brought about Johnson’s earlier reversal from a supporter of working with Assad and Russia in Syria, into a staunch opponent of doing so once he became Foreign Secretary

Before becoming foreign secretary, Mr Johnson praised Russia and Assad for retaking the ancient city of Palmyra from Isis, and suggested Britain join forces with them against the jihadists. Whitehall sources said he changed his mind as early as his first intelligence briefing in the foreign office, becoming one of Assad and Putin’s most vocal critics, accusing them of war crimes against Syrian civilians.  British officials hoped that Mr Trump would undergo a similar conversion when he started receiving his intelligence briefings. Thus far, he has not. Yesterday’s events, however, suggest Mr Johnson’s thinking has evolved again, back towards Mr Trump’s.

In light of recent events some of us might be excused for wondering what was in Boris Johnson’s first intelligence briefing which made him change his mind on Assad and Russia so completely.

It goes without saying that Theresa May’s and Boris Johnson’s reversals on the ‘regime change’/’democracy promotion’ policy and on the future of President Assad are made with no conviction.

The British elite are deeply unhappy with the recent turn of events, and the abandonment of both the ‘regime change’/’democracy promotion’ policy and of the project of getting President Assad to go, something they have been staunchly committed to.

These policy reversals are something which the British did not and do not want to do, but which the arrival of President Trump in the White House is forcing on them.

The decline in British power leaves them no alternative.

Email ThisBlogThis!Share to TwitterShare to FacebookShare to Pinterest
Labels: Donald Trump, Theresa May