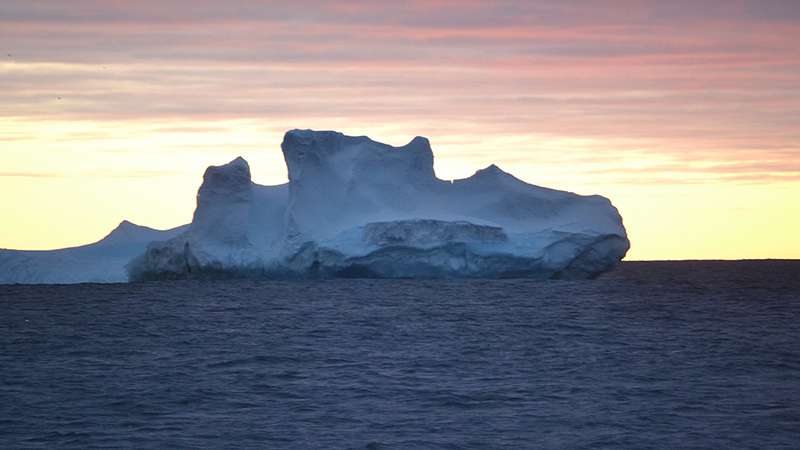 In some places along the Antarctic coast, ice formation causes seawater to grow saltier and therefore denser, so that it sinks to the sea floor. Known as the Antarctic Bottom Waters (AABW), these deep, cold waters play a critical role in regulating circulation, temperature, and availability of oxygen and nutrients throughout the world's oceans. Credit: Photo by Alison Macdonald, Woods Hole Oceanographic Institution

In the cold depths along the sea floor, Antarctic Bottom Waters are part of a global circulatory system, supplying oxygen-, carbon- and nutrient-rich waters to the world's oceans. Over the last decade, scientists have been monitoring changes in these waters. But a new study from the Woods Hole Oceanographic Institution (WHOI) suggests these changes are themselves shifting in unexpected ways, with potentially significant consequences for the ocean and climate.

In a paper published January 25 in Science Advances, a team led by WHOI oceanographers Viviane Menezes and Alison Macdonald report that Antarctic Bottom Water (AABW) has freshened at a surprising rate between 2007 and 2016—a shift that could alter ocean circulation and ultimately contribute to rising sea levels.

"If you change the circulation, you change everything in the ocean," said Menezes, a WHOI postdoctoral investigator and the study's lead author. Ocean circulation drives the movement of warm and cold waters around the world, so it is essential to storing and regulating heat and plays a key role in Earth's temperature and climate. "But we don't have the whole story yet. We have some new pieces, but we don't have the entire puzzle."

The puzzle itself isn't new: past studies suggest that AABW has been undergoing significant changes for decades. Since the 1990s, an international program of repeat surveys has periodically sampled certain ocean basins around the world to track the circulation and conditions at these spots over time. Along one string of sites, or "stations," that stretches from Antarctica to the southern Indian Ocean, researchers have tracked the conditions of AABW—a layer of profoundly cold water less than 0°C (it stays liquid because of its salt content, or salinity) that moves through the abyssal ocean, mixing with warmer waters as it circulates around the globe in the Southern Ocean and northward into all three of the major ocean basins. 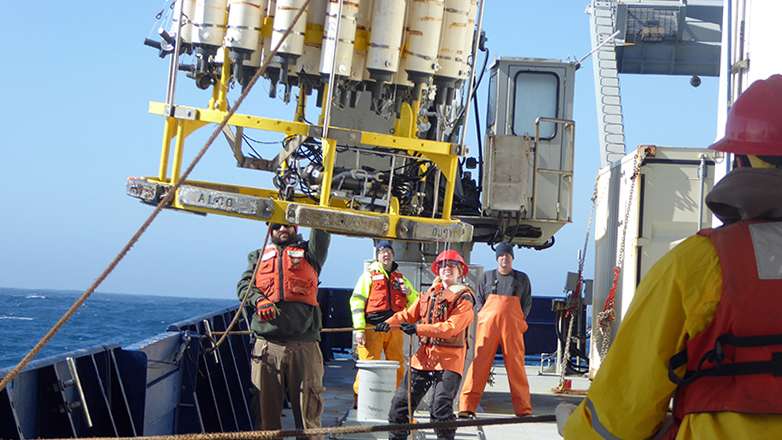 WHOI researchers gathered seawater samples using an instrument called a rosette -- a rose-like array of 36 bottles that can be individually opened and closed to collect samples at different locations and depths in the ocean. Credit: Alison Macdonald, Woods Hole Oceanographic Institution
The AABW forms along the Antarctic ice shelves, where strong winds cool open areas of water, called polynyas, until some of the water freezes. The salt in the water doesn't freeze, however, so the unfrozen seawater around the ice becomes saltier. The salt makes the water denser, causing it to sink to the ocean bottom.
"These waters are thought to be the underpinning of the large-scale global ocean circulation," said Macdonald, a WHOI senior research specialist and the study's co-author. "Antarctic Bottom Water gets its characteristics from the atmosphere—for example, dissolved carbon and oxygen—and sends them deep into the ocean. Then, as the water moves around the globe, it mixes with the water around it and they start to share each other's properties. It's like taking a deep breath and letting it go really slowly, over decades or even centuries."
As a result, the frigid flow plays a critical role in regulating circulation, temperature, and availability of oxygen and nutrients throughout the world's oceans, and serves as both a barometer for climate change and a factor that can contribute to that change.

A past study using the repeat survey data found that AABW had warmed and freshened (grown less saline) between 1994 and 2007. When Macdonald and Menezes revisited the line of stations, they measured how AABW has changed in the years since.

During the austral summer of 2016, they joined the crew of the research ship R/V Revelle and cruised north from Antarctica to Australia, braving frequent storms to collect samples every 30 nautical miles. In a shipboard lab, they analyzed the samples using data from conductivity-temperature-depth (CTD) sensors, which measure the water's salinity, temperature and other properties, with support from study co-author Courtney Schatzman of the Scripps Institution of Oceanography, who processed the raw data. 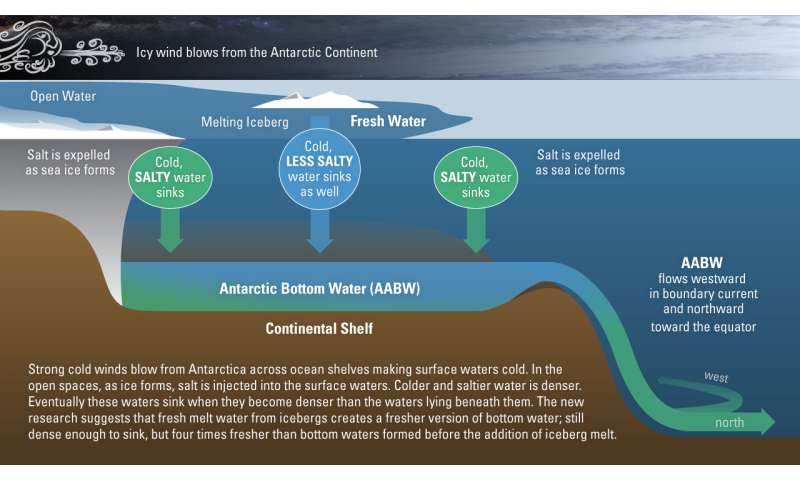 The team found that the previously detected warming trend has continued, though at a somewhat slower pace. The biggest surprise, however, was its lack of saltiness: AABW in this region has grown fresher four times faster in the past decade than it did between 1994 and 2007.

"I thought, 'Oh wow!' when I saw the change in salinity," said Menezes. "You collect the data and sometimes you spend 2 to 3 years to find something, but this time we knew what we had within hours, and we knew it was very unexpected."

Such a shift, were it global, could significantly disrupt ocean circulation and sea levels.

"The fresher and warmer the water is, the less dense it will be, and the more it will expand and take up more space - and that leads to rising sea levels," Macdonald said. "If these waters no longer sink, it could have far reaching affects for global ocean circulation patterns."

Questions remain around the cause of the shift. Menezes and Macdonald hypothesize that the freshening could be due to a recent landscape-changing event. In 2010, an iceberg about the size of Rhode Island collided with Antarctica's Mertz Glacier Tongue, carving out a more-than-1,000-square-mile piece and reshaping the icescape of the George V/Adelie Land Coast, where the AABW observed in this study is thought to form. The subsequent melting dramatically freshened the waters there, which may have in turn freshened the AABW as well. Future studies could use chemical analysis to trace the waters back to the site of the collision and calving and confirm the hypothesis.


Provided by: Woods Hole Oceanographic Institution
Posted by seemorerocks at 18:32