Another surge of warm air invades the Arctic

A surge of warm air and stormy weather has once again invaded the Arctic, sending temperatures soaring and stagnating winter sea ice growth. These repeated incursions have helped keep sea ice area at record low levels for much of the freeze season, and have even contributed to an exceptional cold season retreat. 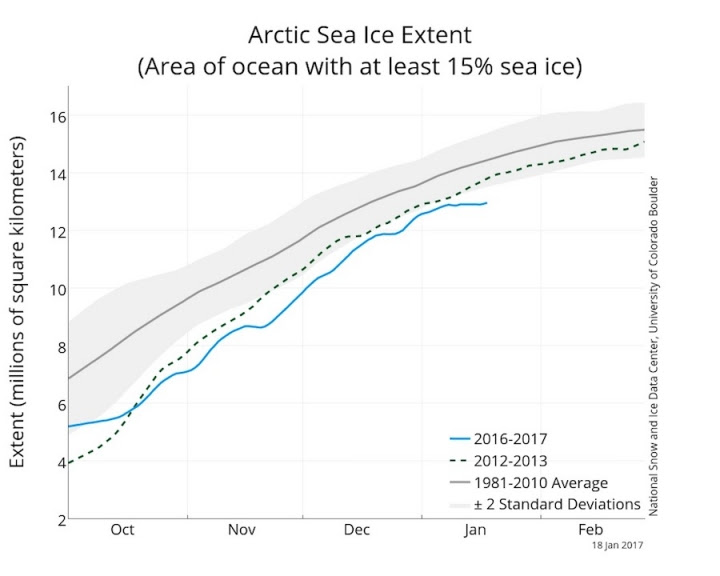 Sea ice area during the winter freeze-up (in blue) as compared to the long-term average (in gray). Periodic incursions of warm, stormy weather, along with persistent winter warmth, have kept sea ice at record low levels for much of the winter.Click image to enlarge. Credit: NSIDC

These recent record lows are part of a clear downward spiral of Arctic sea ice caused by regional temperature rise that is happening at twice the global pace, fueled by continued greenhouse gas emissions. 2016, the hottest year on recordfor the planet, was something of an exclamation point on that Arctic trend, with seven months of record low sea ice levels, as well as record high air temperatures in the region.

“2016 is the most anomalous year we have seen yet and it appears to be continuing,” Julienne Stroeve, of the U.S.National Snow & Ice Data Center and the University College London, said in an email. “This is not going to look good going into the melt season.”

This decades-long decline in sea ice has repercussions for native communities and for the Arctic ecosystem, of which the sea ice is a vital component. It is also exposing the fragile region to more shipping and other commercial activity and could be altering weather patterns over parts of the Northern Hemisphere.
The current episode is the third major incursion of warm, stormy weather into the heart of the Arctic during this freeze season, “although really it has just been persistently warm the entire winter across much of the Arctic Ocean basin,” Zack Labe, a Ph.D. student in climate science at University of California, Irvine, said in an email.
The storms are coming up from the northern Atlantic, pulling warmer air with them, as well as bringing increased moisture and stronger winds and waves ­— all factors that stymie sea ice growth, Labe said.
The first incursion, in November, even caused sea ice to retreat, a virtually unprecedented occurrence during the cold season in nearly 40 years of satellite record keeping.

The incursions are linked to wilder gyrations of the jet stream, the large current of air that guides storms across the Northern Hemisphere. Some scientists have suggested that this wavier jet stream pattern could in turn be linked to the unusually open waters of the Barents Sea, which sits to the north of Scandinavia and eastern Russia, said Mark Serreze, director of the NSIDC.
The idea is that the increasingly open waters of the Arctic could affect the release of heat energy into the atmosphere, altering weather patterns. The idea remains a controversial one, though.
But the fact that the Barents has relatively little ice at present means during these incursions, “that warmer air has longer time over the relatively warm waters in the Barents, which helps the warmth travel farther north into the ice before it starts to cool,” Walt Meier, a NASA sea ice researcher, said.

This latest bout of warm weather has sent temperatures soaring, particularly above the Arctic Circle. An ocean buoyfairly near the North Pole recorded a temperature of 23°F (-5°C) — still below freezing, but well above normal. The average for the area of the Arctic north of 80 degrees latitude was around -15°C, compared to the 1958-2002 average of -30°C.

That puts this episode on par with those from earlier in the season as well as several periods of exceptional Arctic warmth last winter. During one warm spell last January, temperatures in some parts of the Arctic surged to 23°F above normal.

“In all my years of studying the Arctic, I've never seen Arctic Ocean ‘heat waves’ of the magnitude that we've observed over the past two winters,” Serreze said.
Right now, sea ice levels are at record levels for January, following a record low average in November and a second place finish in December. But whether the bouts of warm air will continue through the remainder of the winter isn’t clear, Stroeve said.
She and other sea ice researchers don’t think these remarkable winters mark a tipping point for Arctic sea ice — in other words, sea ice won’t drop off a cliff, never to return. If greenhouse gases are reined in and warming is kept in check, as nations pledged to do in the 2015 Paris climate agreement, the sea ice could regrow.
But that depends on whether nations follow through on those commitments. There are concerns that the incoming Trump administration could disregard the Paris pact, as the president-elect has pledged to do, disrupting the nascent international efforts to limit emissions