Back to Year Zero with Donald Trump 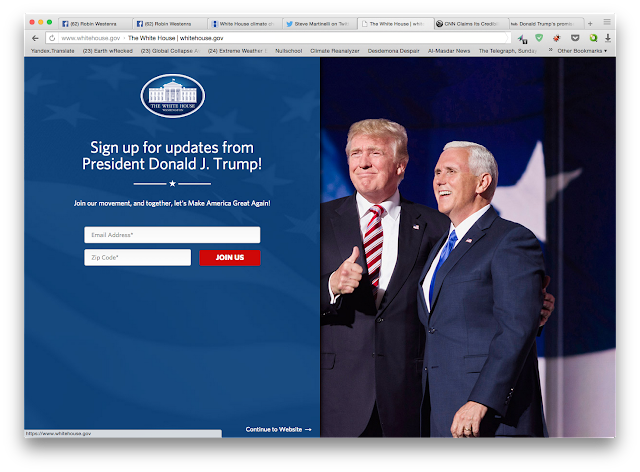 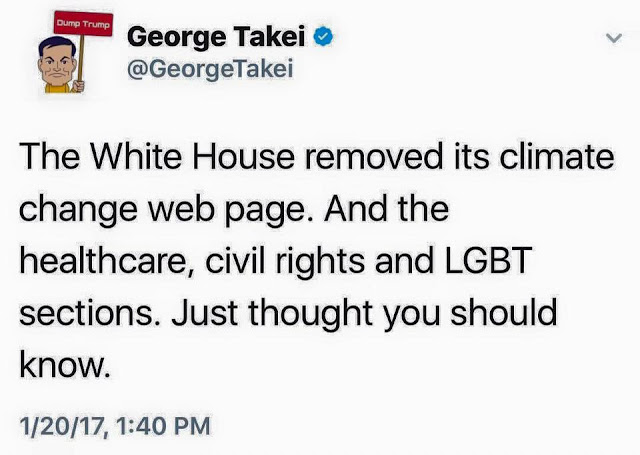 Less than an hour after President Trump took the oath of office on Friday, the White House’s webpage on climate change disappeared from the Executive Branch's main site, the latest sign that the new administration will divert resources – and attention – from the issue.

The removal of the page from the White House’s website came around the same time the site and other Executive Branch digital platforms were overhauled to reflect the new administration. The Obama Administration's climate change page still exists, but was migrated to a National Archives website.

Trump has long denied, or at least questioned, the nearly unanimous agreement among scientists that human activity is causing rapid shifts in the Earth’s climate. At one point, the president called the phenomenon a “hoax” propagated by China to make U.S. manufacturing less competitive.


He has also brought into question whether the U.S. will adhere to the United Nation’s landmark climate deal, which went into effect late last year. Trump has indicated that the U.S. could withdraw from the accord, though such a move would take years to accomplish. 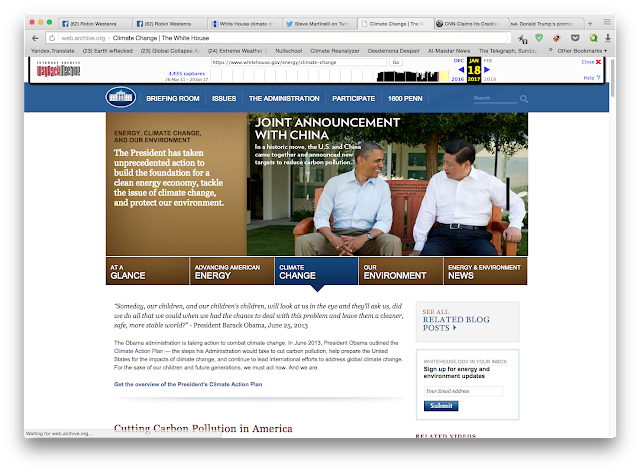 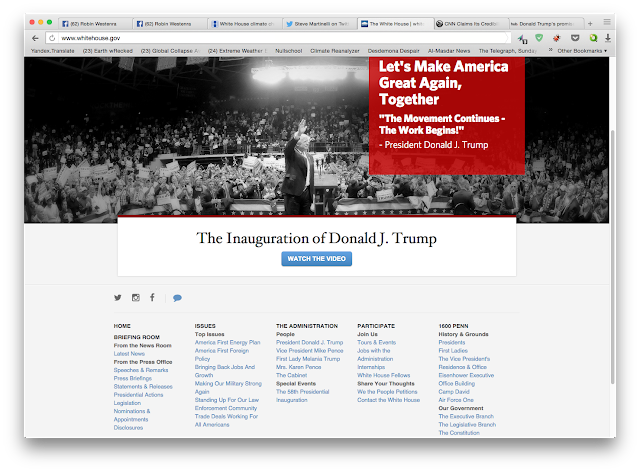 No mention of climate change - here is Trump's energy policy

Energy is an essential part of American life and a staple of the world economy. The Trump Administration is committed to energy policies that lower costs for hardworking Americans and maximize the use of American resources, freeing us from dependence on foreign oil.

For too long, we’ve been held back by burdensome regulations on our energy industry. President Trump is committed to eliminating harmful and unnecessary policies such as the Climate Action Plan and the Waters of the U.S. rule. Lifting these restrictions will greatly help American workers, increasing wages by more than $30 billion over the next 7 years.

Sound energy policy begins with the recognition that we have vast untapped domestic energy reserves right here in America. The Trump Administration will embrace the shale oil and gas revolution to bring jobs and prosperity to millions of Americans. We must take advantage of the estimated $50 trillion in untapped shale, oil, and natural gas reserves, especially those on federal lands that the American people own. We will use the revenues from energy production to rebuild our roads, schools, bridges and public infrastructure. Less expensive energy will be a big boost to American agriculture, as well.

The Trump Administration is also committed to clean coal technology, and to reviving America’s coal industry, which has been hurting for too long.

In addition to being good for our economy, boosting domestic energy production is in America’s national security interest. President Trump is committed to achieving energy independence from the OPEC cartel and any nations hostile to our interests. At the same time, we will work with our Gulf allies to develop a positive energy relationship as part of our anti-terrorism strategy.

Lastly, our need for energy must go hand-in-hand with responsible stewardship of the environment. Protecting clean air and clean water, conserving our natural habitats, and preserving our natural reserves and resources will remain a high priority. President Trump will refocus the EPA on its essential mission of protecting our air and water.

A brighter future depends on energy policies that stimulate our economy, ensure our security, and protect our health. Under the Trump Administration’s energy policies, that future can become a reality.
Posted by seemorerocks at 12:38