A bit of historical context over Trump's Mexican fence

Inquiring minds are taking a flashback look at the Secure Fence Act of 2006, signed by president Bush. 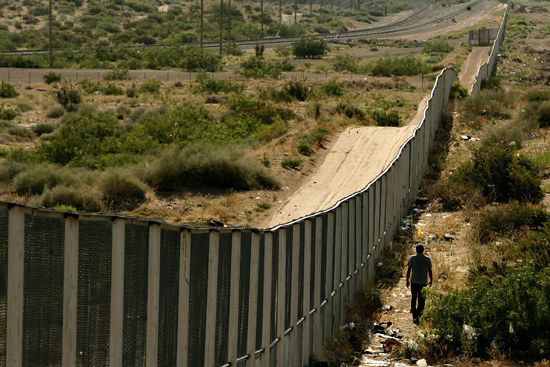 Additionally, the law authorizes more vehicle barriers, checkpoints, and lighting as well as authorizes the Department of Homeland Security to increase the use of advanced technology like cameras, satellites, and unmanned aerial vehicles to reinforce infrastructure at the border. Congress approved $1.2 billion in a separate homeland security spending bill to bankroll the fence, though critics say this is $4.8 billion less than what’s likely needed to get it built.

The final roll call shows both Barrack Obama and Hillary Clinton voted for the bill.

In a CNN debate in Austin, Texas, Democratic presidential candidates Barack Obama and Hillary Clinton agreed Thursday night that the Secure Border Fence Act of 2006, which directs the secretary of Homeland Security to construct 700 miles of double border fencing along specific sections of the U.S.-Mexico border, should not be enforced as written.

Stressing her desire to be deferential to the views of people who live along the border in Texas — which on March 4 will hold a primary that is widely viewed as a must-win event for the New York senator — Clinton said of a border fence, “there may be limited places where it would work. But let’s deploy more technology and personnel, instead of the physical barrier.”

“Well, I think both Senator Obama and I voted for that as part of the immigration debate,” she started. “And having been along the border for the last week or so–in fact, last night I was at the University of Texas at Brownsville — and this is how absurd this has become under the Bush administration. Because, you know, there is a smart way to protect our borders, and there is a dumb way to protect our borders. And what I learned last night when I was there with Congressman [Solomon] Ortiz [D.-Texas] is that the University of Texas at Brownsville would have part of its campus cut off.

“This is the kind of absurdity that we’re getting from this administration,” Clinton continued. “I know it because I’ve been fighting with them about the northern border. Their imposition of passports and other kinds of burdens are separating people from families, interfering with business and commerce, the movement of goods and people. So what I’ve said is that I would say, wait a minute, we need to review this. There may be places where a physical barrier is appropriate.

“I think when both of us voted for this, we were voting for the possibility that where it was appropriate and made sense, it would be considered,” said Clinton. “But as with so much, the Bush administration has gone off the deep end, and they are unfortunately coming up with a plan that I think is counterproductive.

When King then asked her whether she now thought her vote for the border fence was wrong, she did not give a yes-no answer. Instead, she suggested using more manpower and technology, instead of fencing, to secure the border.

“But, you know, John,” she said, “there’s a lot we’ve learned about technology and smart fencing. You know, there is technology that can be used instead of a physical barrier. It requires us having enough personnel along the border so that people can be supervising a certain limited amount of space and will be able to be responsive in the event of people attempting to cross illegally.”

And Hillary moaned about Bush “absurdity”.