US undermines Israeli agreement with Azerbaijan?

-- I am not going to try and explain what's going on here. This kind of a breach of security around an ally's military operations is indeed unprecedented. Can we take hope in a possible breakdown of the U.S./Israeli war machine? I think that's too optimistic. The safest (and eminently justifiable) position to take is that U.S. and Israeli foreign and military policy is in serious disarray. In the meantime we watch the progress of the U.S.S. Enterprise, which should be passing the Suez Canal soon, en route to the Arabian Sea where it will stage before heading for Hormuz.
These tensions are unbearably nerve wracking for the whole world. It's not possible or healthy to put race horses in the starting gate, ready to run, and leave them there for long. The tensions being placed on both nation states and souls are painful and draining, like fingernails on a chalkboard."
-- MCR
Attacking Iran: Did US just torpedo Israeli deal for a base in Azerbaijan?
Israel is developing a 'secret staging ground' in Azerbaijan for a possible attack on Iran, reports Foreign Policy magazine. US officials aren't happy with that, and may have leaked the story. 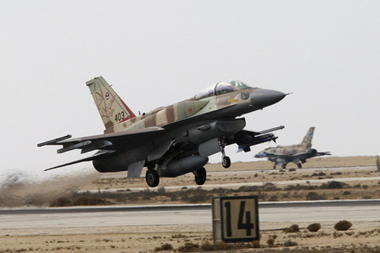 Christian Science Monitor,
29 March, 2012
The three-way tension between the United States, Israel, and Iran became tenser this week with a widely cited report that Israel is developing a “secret staging ground” in Iran’s neighbor to the north – Azerbaijan – for a possible attack on Iran’s nuclear facilities.
Quoting unnamed senior US diplomats and military intelligence officials, a lengthy article in Foreign Policy magazine asserts that “Israel has recently been granted access to airbases on Iran's northern border.”
"The Israelis have bought an airfield," a senior administration official is quoted as saying, "and the airfield is called Azerbaijan."
Why would US officials be talking about this? Likely to slow down any rush to war in an already volatile region, some speculate.
"I think this leak today is part of the administration's campaign against an Israeli attack," former US diplomat John Bolton said Thursday on Fox News.


"Clearly, this is an administration-orchestrated leak," Mr. Bolton said, adding, "It's just unprecedented to reveal this kind of information about one of your own allies.”
The challenge for Israel in planning such a strike is the long distance to potential targets – some 2,000 miles round-trip – for its F-15 and F-16 fighters. Planning for such strikes always involves tradeoffs between fuel and bombs.
Bases in nearby Azerbaijan (including abandoned former Soviet airfields) could be used for landing and refueling after any strike, allowing Israeli jets to carry more ordnance. Such airfields also could be a staging point for search-and-rescue helicopters that might be necessary to recover downed Israeli pilots. They also could be used to launch drone aircraft for bomb damage assessment once any strike is concluded.
Israel and Azerbaijan have developed an economic military relationship over the years.
Israel buys oil from Azerbaijan, and Azerbaijan recently agreed to buy $1.6 billion in military hardware from Israel, including drones, antiaircraft, and missile-defense systems.
This week’s report of a possible basing agreement with Israel does nothing to improve the relationship between neighbors Azerbaijan and Iran
Teheran has accused Azerbaijan of working with Israel's spy services suspected of assassinating Iranian nuclear scientists, and individuals accused of plotting terrorist attacks with Iran have been arrested in Azerbaijan.
For their part, officials in Azerbaijan deny granting aircraft landing rights to Israel combat aircraft.
"This information is absurd and groundless," defense ministry spokesman Teymur Abdullayev told Agence France Presse (AFP).
"We have stated on numerous occasions and we reiterate that there will be no actions against Iran … from the territory of Azerbaijan," presidential official Ali Hasanov told journalists in Baku, AFP reported.
So far, there’s been no official comment on the Foreign Policy article by Israeli officials, who may be just as happy to increase the psychological pressure on Iran.
Early this month, President Obama made clear his position on Iran’s nuclear potential, both in meetings with Israel's Prime Minister Benjamin Netanyahu and in his speech to the American Israel Public Affairs Committee (AIPAC), the prominent pro-Israel lobbying organization.
“Iran’s leaders should understand that I do not have a policy of containment,” Obama told AIPAC. “I have a policy to prevent Iran from obtaining a nuclear weapon.”
“I will take no options off the table, and I mean what I say," Obama said, adding for dramatic effect, “There should not be a shred of doubt by now: when the chips are down, I have Israel’s back."
Still, the US continues to act as a diplomatic brake of sorts on any rush by Israel to attack Iran. Which may be why John Bolton – a noted hawk who served as UN ambassador in the most recent Bush administration – could be right when he says that administration officials leaked their concerns about any basing agreement between Israel and Azerbaijan.
"We're watching what Iran does closely," one of the US intelligence sources was quoted as saying in the Foreign Policy article. "But we're now watching what Israel is doing in Azerbaijan. And we're not happy about it."
Posted by seemorerocks at 19:03