Iran says it shot down infiltrator
drone near key port – not one of
ours, US responds

Iranian air defense forces have shot down a foreign drone near the port city of Mahshahr, Iranian media reported, showing alleged footage of the intercept as proof. The US Central Command said it didn’t lose any of its UAVs.

The drone was taken down on Friday by an Iran-developed Mersad surface-to-air missile, the Iranian Mehr news agency reported. Alleged footage of the takedown released by the Iranian side showed a missile being fired, followed by an explosion.

Gholamreza Shariati, the governor of the Khuzestan province where Mahshahr is located, said a wreck of the drone was recovered from the marshlands in the suburbs of the city.

The Iranian official said the aircraft “definitely belonged to a foreign country”, but would not say which.

Responding to the news, the US Central Command stated that none of the drones operated by the US military had been lost. Israel, another party that could fly a surveillance UAV inside Iranian airspace, declined to comment on the incident.

Iran’s Revolutionary guard shot down a sophisticated US drone in June. Tehran and Washington disputed whether the aircraft had violated Iran's border, which was what Iran stated, or was destroyed illegally in international airspace.

The incident comes amid a period of high tension in the Middle East, as the US continues its so-called “maximum pressure campaign” to cripple the Iranian government through unilateral sanctions, arm-twisting of its trade partners and military brinkmanship. 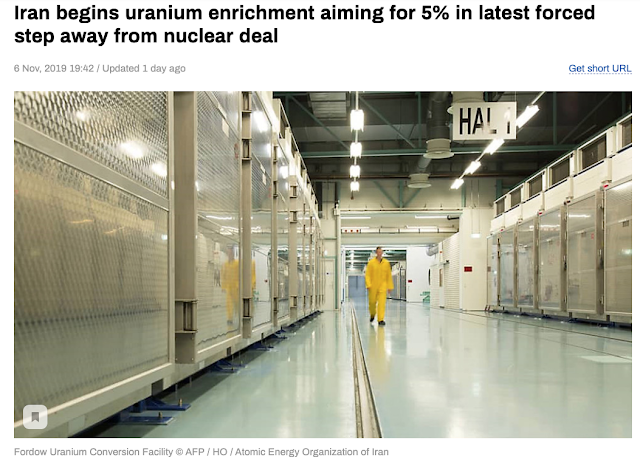 Iran has begun the process of enriching uranium to 5 percent at its Fordow nuclear facility this week, as Tehran continues to scale back its commitments under the 2015 nuclear treaty that the US withdrew from last year.
Iran’s nuclear chief Ali Akbar Salehi announced Tuesday that the country would begin to inject uranium gas into centrifuges at the underground facility, and said that it had the capacity to enrich to 20 percent “if needed.”

Iranian state media reported Wednesday that a 2,800 kg cylinder loaded with 2,000 kg of enrichment precursor uranium hexafluoride has been installed at Fordow. Under the 2015 deal, Iran committed to reducing the purity of its enriched uranium to 3 percent and enrichment was prohibited at the Fordow plant.

The process began on Wednesday "with the presence of inspectors from the International Atomic Energy Agency (IAEA)," Iranian state TV reported.

In a statement carried by Iran’s semi-official Tasnim news agency on Thursday, the country’s atomic energy authority confirmed that the enrichment process is underway at Fordow.

"After all successful preparations ... injection of uranium gas to 1044 centrifuges started on Thursday at Fordow ... all the process has been supervised by the inspectors of U.N. nuclear watchdog," the agency said.