I woke to this extremely bad news this morning. First, there was a brief item in the Russian English-language newspaper, the Moscow Times. 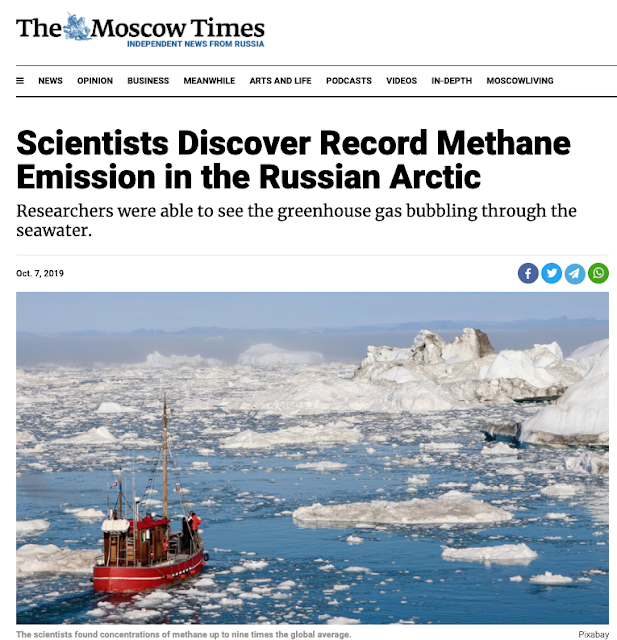 It was repeated in two most surprising western publications - the UK Telegraph and Newsweek,neither known for fearless reporting of the worst news about global heating and climate collapse.

None of the usual suspects when it comes to climate news - the BBC or the Guardian have covered it, largely, I suspect, because it is truly devastating news and does not fit into their narratives.

The statement from Tomsk Polytechnic
University can be seen HERE 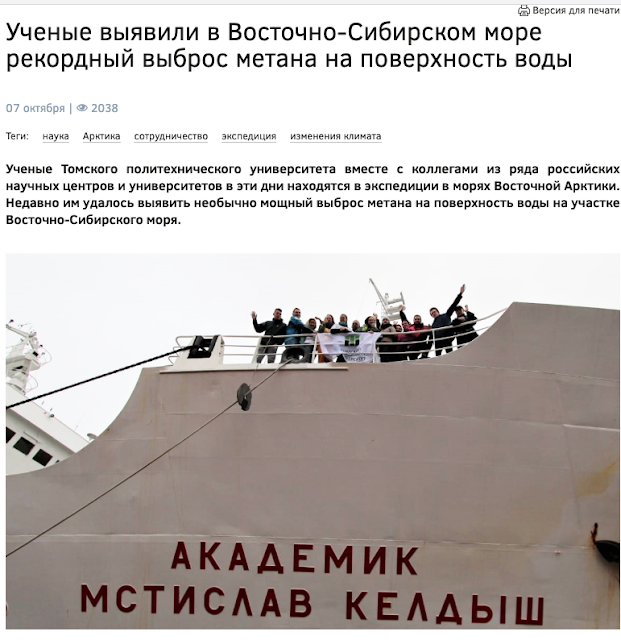 Russian scientists in the Arctic Ocean said they have discovered the most powerful methane gas fountain ever recorded, highlighting the danger of this greenhouse gas accelerating climate change or causing an oil or gas spill as it erupts from thawing permafrost.

A research expedition from the Tomsk polytechnic university found the seep, as methane leaks are known, east of Bennett Island in the East Siberian Sea, where its violent bubbles seemed to make the water “boil” over an area of 50 square feet.

The concentration of methane in the air there was up to 16 parts per million, more than nine times higher than the atmospheric average.
“This is the most powerful seep I have ever been able to observe,” lead scientist Igor Semiletov, who has participated in 45 Arctic expeditions, said in a statement this week. “No one has ever recorded anything similar.”

Mr Semiletov warned last month that the sudden release of gases from underwater permafrost could harm oil and gas infrastructure.

"If we don't take into account research results about the condition of underwater permafrost, geological catastrophes similar to the (Deepwater Horizon) accident in the Gulf of Mexico could occur during exploratory and commercial activities, which would cause irreparable damage,” he said.

Although Russia has only one offshore oil drilling rig, it has been rapidly expanding the transport of liquified natural gas in the Arctic. 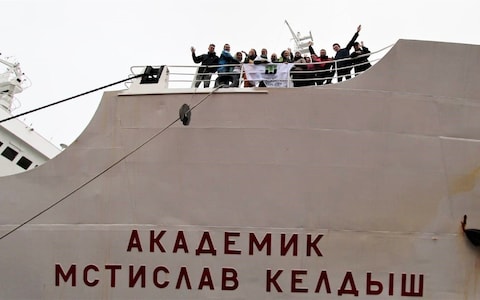 Members of the expedition wave before setting out from Arkhangelsk last month CREDIT: TOMSK POLYTECHNIC UNIVERSITY

The threat extends to the nuclear power units including seafloor reactors that Russia has been considering for Arctic development, Mr Semiletov added. In August, state concern Rosatom launched a floating nuclear power plant to power the gold-mining outpost of Pevek.

When researchers drew near to the “emerald-coloured” water of the methane fountain, they “could see how gas was rising to the surface from the black depths of the sea in thousands of bubbly strands,” according to expedition member Sergei Nikiforov.

They took samples of bottom sediments, water and gas, scooping up the extraordinarily large methane bubbles in buckets rather than small plastic capsules and filling several pressurised cannisters.

The next day, the expedition stumbled upon another giant seep of roughly the same size, even though discovering seeps among rough ocean waves is usually “harder than finding a needle in a haystack,” Mr Nikiforov said.

The group set out last month on a research vessel to study the scale and effects of methane gas emissions from underwater permafrost along the northern sea route, which Russia hopes can draw shipping away from the Suez Canal as the ice melts. The project also includes scientists from the UK, the United States, Italy, the Netherlands and Sweden.

This permanently frozen soil lies under two-thirds of Russian territory as well as much of the Arctic Ocean. It has been thawing as the Arctic warms at least twice as fast as the rest of the planet, cracking buildings and pipelines, hampering agriculture, awakening ancient diseases and releasing more greenhouse gases.

Methane is especially dangerous, as it can warm the earth 86 times as much as carbon dioxide over 20 years in the atmosphere. 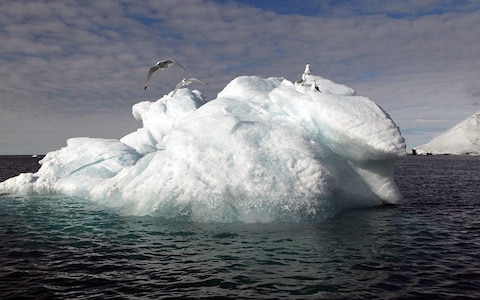 Seagulls fly to Arctic sea ice CREDIT: VERA KOSTAMO/RIA NOVOSTI
A recent Russian study found that the thawing of underwater permafrost has doubled in the past three decades, reaching 18 centimetres a year. One of the consequences has been massive releases of methane from the seafloor, including from hydrates, ice-like formations of solid methane that can explode into gas if they are destabilised.

Methane could also raise the acidity of the water and kill off sea creatures as it breaks down.

The expedition will next proceed to the Laptev Sea to study “mega-seeps” there.

This article appeared in Newsweek 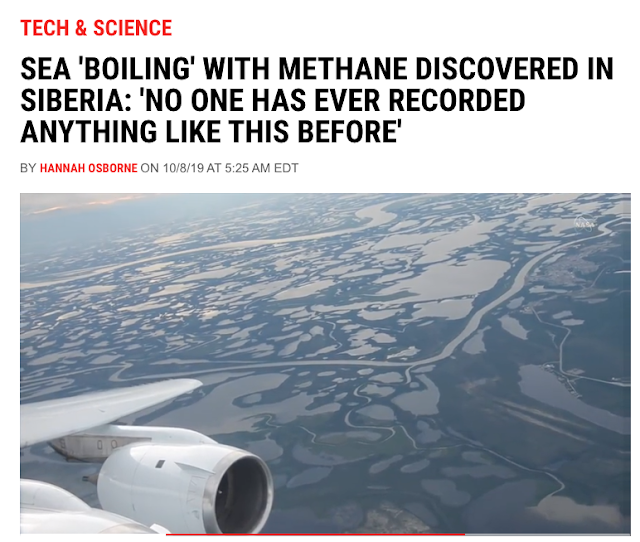 But permafrost is also present under the ocean. In 2017, scientists announced they had discovered hundreds of craters at the bottom of the Barents Sea, north of Norway and Russia. The craters had formed from methane building up then exploding suddenly when the pressure got too high.

In the latest expedition to chart methane emissions coming from the ocean, researchers analyzed the water around Bennett Island, taking samples of sea water and sediments. In one area, however, they found something unexpected—an extremely sharp increase in the concentration of atmospheric methane.
According to a statement from Tomsk Polytechnic University, it was six to seven times higher than average.

They then noticed an area of water around four to five square meters that was "boiling with methane bubbles," the statement said. This could be scooped out with buckets, the researchers said. After identifying the fountain, the team was able to take samples directly from it. Methane levels around the fountain were nine times higher than average global concentrations.


"This is the most powerful gas fountain I've ever seen," Semiletov said, according to a translation from the Moscow Times. "No one has ever recorded anything like this before."

After identifying the fountain, the team was able to take samples directly from it. Methane levels around the fountain were nine times higher than average global concentrations. The following day they found another methane fountain and conducted a comprehensive analysis of it.

Sergey Nikiforov, a journalist who took part in the expedition, said there will now be more research and experiments in this part of the ocean: "The work to study the secrets of the Arctic seas...continues," he said in a statement.

Dane Wigington sent me the following. I am tempted to agree:


"I believe the “official” methane readings at altitude were recently cut almost in half (falsified).

"Trying to locate that link / commentary now, might have spotted it on the Arctic news FB page,

"All data now being radically falsified to the down side,,,,,,the desperate attempt to hide biosphere and climate implosion from the public till the last possible moment...."

I have been working all morning to produce this video, until now without success. If I record one way I have been unable to export the (Quicktime) file onto the desktop. If I use another method for recording the screen I can't get any sound. 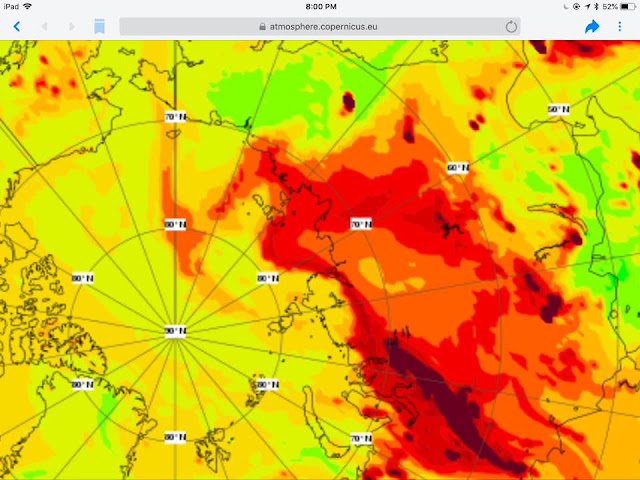 I am quite ready to accept coincidence and occasional confusion on my side but I am unable to believe in what I call infinite coincidence. It then becomes something of a pattern that repeats itself when I produce "controversial" material. Posted by seemorerocks at 17:00