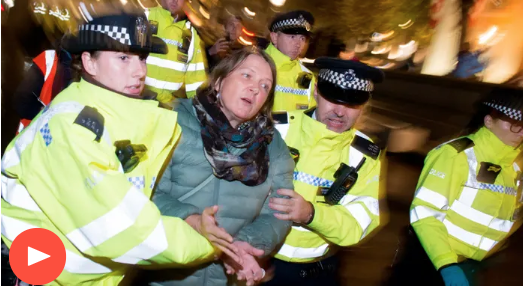 
Police have banned Extinction Rebellion protests from continuing anywhere in London, as they moved in almost without warning to clear protesters who remained at the movement’s camp in Trafalgar Square.

The Metropolitan police issued a revised section 14 order on Monday night that said “any assembly linked to the Extinction Rebellion ‘Autumn Uprising’ ... must now cease their protests within London (MPS and City of London Police Areas)” by 9pm.

Almost immediately, officers moved into Trafalgar Square and demanded that protesters remove their tents. Most XR activists staying at the site had already decamped to Vauxhall Pleasure Gardens, south of the river, and only a few dozen tents, along with gazebos and other infrastructure, remained on the square.

Protesters gather their belongings as police remove the last of the Extinction Rebellion demonstration in Trafalgar Square. Photograph: David Mirzoeff/PA
More than 1,400 people have been arrested during eight days of XR action, with the threat that anyone defying police orders would be detained.

Until Monday night, Trafalgar Square had been specified by the Met as the only legitimate protest site and officers had been telling protesters to go to the square if they wanted to continue protesting.

Howard Rees, an XR spokesman who was at the scene, told the Guardian that police started clearing Trafalgar Square before even issuing the revised order to protesters. “They gave us the notification: ‘We have started clearing the square’,” Rees said.

“It’s all peaceful. People for the most part are being given the opportunity to move their possessions. But obviously there are a lot of people who have had stuff here who are not actually on site, hence the marquees are full of people’s gear and other people are trying to get it to safety. The police are for the most part watching over that operation.”

On Twitter, the London branch of XR wrote: “Police are clearing peaceful protest in Trafalgar & Vauxhall. They are back-tracking on promises made &, MEPs say, in contravention of UK law, in the national square. This is an emergency, and an outrage. The police must respect the law. This is a democracy.”

Kevin Blowe, the coordinator of the Network for Police Monitoring (Netpol), said the order effectively amounted to a ban on XR without going through the due process that would usually be required. “A ban has to be made by the home secretary,” he said.

“Our reading of it is that the section 14 powers are supposed to be used with caution because people still have a right to protest and potentially this is unlawful, and there is no other way to put it. Take a look at what section 14 says: it’s about restricting a number of people for a particular duration of time. My feeling is that this has to be open to some form of potential legal challenge.”

Scotland Yard said activists were told to cease their protests by 9pm on Monday or face arrest.

Deputy assistant commissioner Laurence Taylor said: “These conditions have been imposed due to the continued breaches of the section 14 condition previously implemented and ongoing serious disruption to the community.

“We have made significant progress in managing Extinction Rebellion’s activity at sites across central London over this past week. Officers have begun the process of clearing Trafalgar Square and getting things back to normal.”

A few XR activists locked themselves in place to slow the police operation, Rees said. Specialist police teams were working to cut them free and arrest them.

It was unlikely that protesters at Trafalgar Square and their equipment would be taken to the alternative camp in Vauxhall, because that site was considered to be full and its security was uncertain as it remained subject to the section 14, Rees said.

He added: “The concern would now be that essentially the police have gone back on their word about us being allowed to stay here, so will Vauxhall Pleasure Gardens be next?”

It came after a day in which scores of protesters were arrested for blocking traffic outside the Bank of England, including a 77-year-old rabbi who was dragged away by officers after refusing to comply with a police order to leave the area.

Hundreds of demonstrators walked into the road outside the Bank of England in the City and sat down early on Monday morning.

The group said: “Extinction Rebellion this morning are disrupting the system bankrolling the environmental crisis. The day of disruption, which will target financial institutions, seeks to highlight the far greater disruption faced by those living in the environments systematically being destroyed by UK-backed companies.

“The ecological damage is global and it is hitting the global south now.” Protesters said they were switching their focus to the financial institutions “funding environmental destruction”.