Questions about Bennett Island off the coast of Eastern Siberia 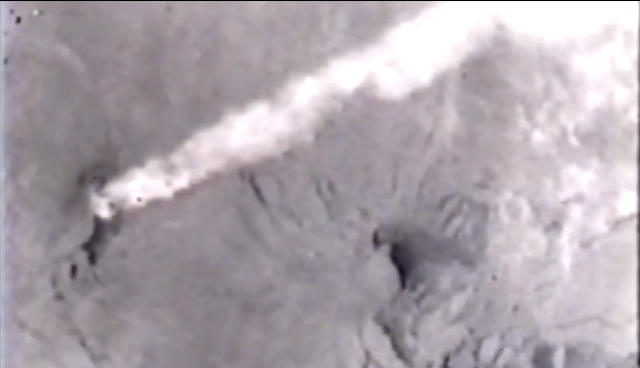 Back in winter when Margo and I were monitoring the Arctic, almost on a daily basis we noticed that there were high emissions of methane in many parts of the world, especially in the Northern Hemisphere.

The one constant is that although high (over 2,000 ppb) the levels were not as high as expected. 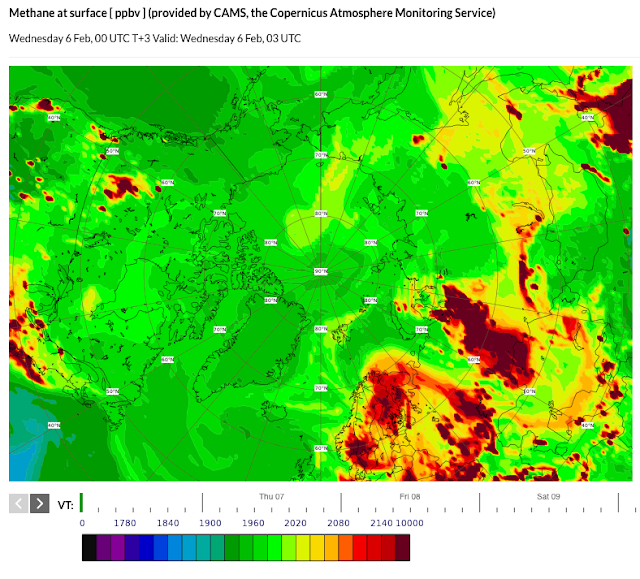 Also, if we look back at Earth Nullschool for September we can see that temperatures around Bennett Island in Eastern Siberia were around 3 degrees Celsius, something that would theoretically provide the conditions for high releases of methane - even if not th conditions for a massive release as feared by Natalia Shakhova and her colleagues.
In the last week or so it has been revealed that huge methane fountains were found by Igor Semiletov and researchers from Omsk University that were releasing up to nine times the global average of methane emissions

It was therefore of interest to find that Bennett Island off the coast was attracting interest in the 19080's and 1990's because of satellite photos that indicated plumes of methane coming out of the ocean next to the island.

Repeated flights over the are revealed no plumes so it was concluded that the anomaly was due to "meteorological conditions".

The conclusion back then was that releases of gases could only happen during spring and not in winter.

"However, all plumes of that remote area documented in the literature were observed during winter or early spring, when temperatures are extremely low and the Polar Ocean is ice covered, whereas the release of natural gases due to thermally weakened permafrost should rather happen during summer."

However, Shakhova described in her paper what Margo and I had observed from CAMS - that is that methane is reaching the surface in the ESAS, even in winter


In addition, about 10% of the ESAS remains open water in winter due to formation of flaw polynyas. Formed simultaneously with land-fast ice in November, flaw polynyas propagate out of fast ice hundreds of kilometers north [82]. Flaw polynyas provide pathways for CH4 escape to the atmosphere during the arctic winter [17]. Areas of flaw polynyas in the ESAS increased dramatically (by up to five times) during the last decades [83], and now exceed the total area of Siberian wetlands [84] (Figure 7). This implies that the ESAS remains an active source of CH4 to the atmosphere year-round, even in the winter when terrestrial Arctic systems are dormant. Increasing storminess and rapid sea-ice retreat causing increased CH4 fluxes from the ESAS are possibly new climate-change-driven processes. Continuing warming of the AO will strengthen these processes, and the role of the ESAS as a year-round contributor to global CH4 emissions will grow over time. The ESAS is a tectonically and seismically active area of the WO [85,86]. During seismic events, a large amount of over-pressurized gas can be delivered to the water column, not only via existing gas migration pathways, but also through permafrost breaks that can occur within otherwise continuous permafrost or pingo-like structures observed over the Arctic shelf [73].


Taking advantage of the new world order, U.S. scientists have finally gathered hard evidence to explain the Bennett Island plumes, a mystery that remained unsolvable during the Cold War.

But the long-sought explanation has proved less exciting than experts had hoped. The Bennett Island plumes apparently result from air streams passing over low mountains on the island, reports Russell C. Schnell, an atmospheric scientists who coordinated the recent aircraft experiment above the island.

Scientists would have liked to find evidence to the contrary. "Deep in my heart of hearts, I still hope they're not orographic [mountain-caused] clouds," says Schnell, director of the National Oceanic and Atmospheric Administration's monitoring station in Hilo, Hawaii.

First spotted on satellite images in 1983, the plumes are extremely thin cloud trails stretching hundreds of kilometers downwind of tiny Bennett Island, located in the East Siberian Sea. Atmospheric scientists put forward several explanations for the ephemeral contrail-like plumes, including the possibility that they resulted from Soviet activity in what was then a militarily sensitive area. At the time, western investigators could not hope to visit Bennett Island to test their ideas. In the absence of direct data, they settled on the hypothesis that the plumes originated from leaking deposits of frozen methane, known to exist beneath the floor of the Arctic Sea (SN: 3/28/87,p.204).

Such methane plumes might have economic implications if they signaled the presence of large natural gas reserves located close to the ocean floor. But the leaks could also have an ominous message, suggesting that global warming had started melting the frozen subsea stores of methane in the Arctic. Because methane is a powerful greenhouse gas, the thawing of such reserves would accelerate the global temperature rise caused by carbon dioxide pollution, scientists warn.

To test the methane hypothesis, Schnell and colleague Anthony D.A. Hansen of the Lawrence Berkeley (Calif.) Laboratory hired a Russian airplane and crew to collect air samples downwind of the island. In late April, the plane flew through one plume and in the vicinity of several others. Anaylsis of the gas samples using extremely sensitive instruments reveals normal amounts of methane, says Schnell. "It doesn't appear that methane leaks at Bennett Island are causing what we see," he says.

Instead, Schnell believes, the clouds form through a more prosaic process as air masses saturated with water vapor pass over the mountains on Bennett Island. As the airstreams rise, they cool, causing water vapor to condense and form clouds that spread out downwind. Scientists have seen similar types of clouds develop downwind of other mountains, including peaks on the Novaya Zemlya islands north of Russia. Using the mountain theory, Schnell successfully forecast the appearance of a plume, lending credence to that hypothesis.

But the Bennett Island plumes have not yielded all their mystery. Meteorologists must now explain why the plumes form at an unusually high altitude, more than 3 kilometers above the mountaintops, says Schnell.

However, it seems that the recent Russian expedition might have established that whatever was seen 30 years ago was not a meteorological phenomenon but was indeed methane and "from a polynia" 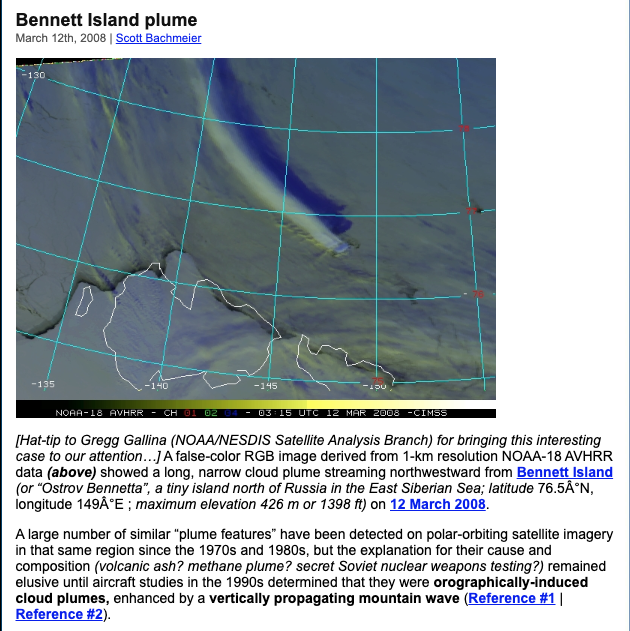