The question of internment camps in China for the Uighurs

I don't have a particularly positive impression of China but I would never take reports from the mainstream media on China when they misrepresent so much in the interests of propaganda.

No, the UN Did Not Report
China Has ‘Massive
Internment Camps’ for
Uighur Muslims

By Ben Norton and Ajit Singh 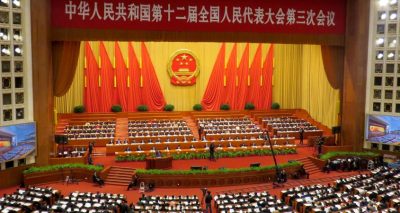 Media outlets from Reuters to The Intercept falsely claimed the UN had condemned China for holding a million Uighurs in camps. The claim is based on unsourced allegations by two independent commission members, US-funded outfits and a shadowy opposition group.

Numerous major media outlets, from Reuters to The Intercept, have claimed that the United Nations has reports that the Chinese government is holding as many as 1 million Uighur Muslims in “internment camps.” But a close examination of these news stories, and of the evidence behind them — or the lack thereof — demonstrates that the extraordinary claim is simply not true.

A spokesperson from the UN Office of the High Commissioner for Human Rights (OHCHR) confirmed in a statement to the Grayzone that the allegation of Chinese “camps” was not made by the United Nations, but rather by a member of an independent committee that does not speak for the UN as a whole. That member happened to be the only American on the committee, and one with no background of scholarship or research on China.

Moreover, this accusation is based on the thinly sourced reports of a Chinese opposition group that receives funding from foreign governments and is closely tied to exiled pro-US activists. While there have been many on-the-ground reports highlighting discrimination that Uighur Muslims have faced at the hands of the Chinese authorities, information about camps containing one million prisoners has originated almost exclusively from media outlets and organizations funded and weaponized by the American government to turn up the heat on Beijing.

A blatant falsehood introduced by Reuters and echoed across mainstream media

On August 10, the UN Committee on the Elimination of Racial Discrimination conducted its regular review of China’s compliance with the International Convention on the Elimination of All Forms of Racial Discrimination. The review, which is conducted periodically for all 179 parties to the Convention, has generated a frenzied response by the Western corporate press — one which is uniformly misleading.

On the day of the review, Reuters published a report with an explosive headline: “U.N. says it has credible reports that China holds million Uighurs in secret camps.” 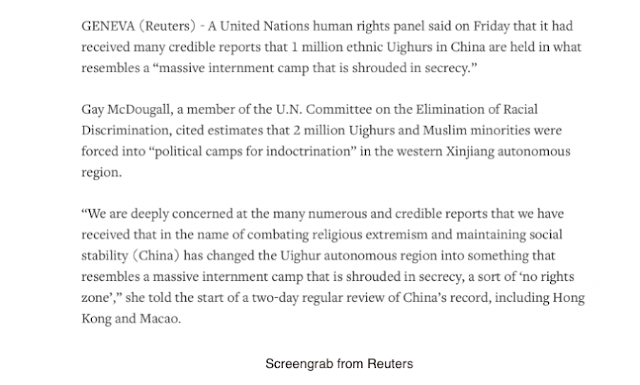 The claim was feverishly reproduced by outlets such as The New York Times and The Washington Post to denounce China and call for international action. Even The Intercept’s Mehdi Hasan belted out the breathless headline, “One Million Muslim Uighurs Have Been Detained by China, the U.N. Says. Where’s the Global Outrage?” The impression readers were given was that the UN had conducted an investigation and had formally and collectively made such charges against China. In fact, the UN had done no such thing.

The headline of Reuters’ report attributed its explosive claim to the UN; yet the body of the article ascribed it simply to the UN Committee on the Elimination of Racial Discrimination. And this committee’s official website makes it clear that it is “a body of independent experts,” not UN officials.

What’s more, a look at the OHCHR’s official news release on the committee’s presentation of the report showed that the only mention of alleged re-education “camps” in China was made by its sole American member, Gay McDougall. This claim was then echoed by a Mauritanian member, Yemhelhe Mint Mohamed.

During the committee’s regular review of China, McDougall commented that she was “deeply concerned” about “credible reports” alleging mass detentions of millions of Uighurs Muslim minorities in “internment camps.” The Associated Press reported that McDougall “did not specify a source for that information in her remarks at the hearing.” (Note that the headline of the AP news wire is much weaker than that of Reuters: “UN panel concerned at reported Chinese detention of Uighurs.”)

Video of the session confirms that McDougall provided no sourcing to back up her remarkable claim.

This is to say, one American member of an independent UN body made a provocative claim that China was interning 1 million Muslims, but failed to provide a single named source. And Reuters and the Western corporate media ran with it anyway, attributing the unsubstantiated allegations of one US individual to the UN as a whole.


US Issues Trade Ultimatum to China


Which government provided these grants is not clear. The Grayzone did not receive a response to several emailed interview requests sent to the Network of Chinese Human Rights Defenders.
However, it appears likely that CHRD could be receiving funding from the US government-backed National Endowment for Democracy (NED).
A search of the NED’s grants database shows funding from 2014 and 2015 totaling approximately half a million dollars to “support the work of Chinese human rights defenders.” It is not clear if this is a reference to the organization specifically, but the description accompanying the grants matches that of CHRD.

In an email to the Grayzone Project, OHCHR spokesperson Julia Gronnevet confirmed that the CERD was not representative of the UN as a whole.

“You are correct that the Committee on the Elimination of Racial Discrimination is an independent body,” Gronnevet wrote. “Quoted comments were made during public sessions of the Committee when members were reviewing State parties.”

Thus the OHCHR implicitly acknowledged that the comments by McDougall, the lone American member of an independent committee, were not representative of any finding by the UN as a whole. The report by Reuters is simply false.

“Credible reports” from a government-funded opposition group with zero transparency

In addition to this irresponsible misreporting, Reuters and other Western outlets have attempted to fill in the gaps left by McDougall, referring to reports made by so-called “activist group” the Network of Chinese Human Rights Defenders (CHRD). Conveniently left out of the story is that this organization is headquartered in Washington, DC.

CHRD, which receives hundreds of thousands of dollars in funding from unnamed governments, advocates full-time against the Chinese government and has spent years campaigning on behalf of extreme right-wing opposition figures.

CHRD is not at all transparent about its funding or personnel. Its annual reports contain notes stating, “This report has been produced with the financial support of generous donors.” But the donors are never named.