Invading Turkish-backed forces are freeing Islamic State prisoners, according to Foreign Policy, also "executing Kurdish prisoners and killing unarmed civilians, videos show."
On Monday a senior U.S. administration official told reporters that Turkey's Syrian Islamist ground proxies are "going to unguarded prisons and releasing ISIS detainees - then blaming Syrian Democratic Forces."
And following prior reports since the start of Turkey's 'Operation Peace Spring' of mass ISIS prison breaks as Kurdish positions came under Turkish artillery fire, more former US captives are taking advantage of the chaos.
“The Kurdish-led Syrian Democratic Forces (SDF) and Syrian Observatory for Human Rights said Sunday that close to 800 members of a camp holding the families of ISIS fighters had escaped after Turkish shelling,” according to an NBC News report. ISIS jail breaks have been reported in places like Ain Issa and Qamlishi city, near the Turkish border, among others.
After President Trump last week said Erdogan assured him Turkey would be taking charge of ISIS prisoners amid its incursion into northeast Syria, the president has since issued a statement as part of newly announced sanctions on Ankara, saying "Turkey must ensure the safety of civilians, including relgious and ethnic minorities, and is now, or may in the future, responsible for the ongoing detention of ISIS terrorist in the region."
On Monday morning Trump echoed the talking points of Turkish officials in a tweet, who have alleged the Kurds themselves are purposefully letting ISIS terrorists go free, speculating, "Kurds may be releasing some to get us involved."
Trump has since implied that it's now also Assad and Russia's problem to clean up the ISIS threat and "protect the Kurds":
However, widespread reports suggest Turkey is actually freeing ISIS prisons, or at least 'looking the other way' as inmates make their escape. It should be noted that many of Turkey's ground proxy forces are made up of ex-ISIS members now on Erdogan's payroll.
And years after the United States actually supported the very same groups (of FSA and Syrian Islamist 'rebel' militants), the mainstream media is finally admitting the fact these Turkish-backed fighters are essentially ISIS who have conveniently changed stripes:
But the long-term question remains, if thousands of ISIS prisoners escape during the current chaos of war in the northeast Syria, where will they show up next?
In total the SDF has been responsible for guarding over 10,000 ISIS prisoners in the region, not to mention the many more ISIS family members kept at places like al-Hol, with a population of 70,000.
There's concern they could be the next wave of terrorists to conduct attacks in Europe or even against American targets.
Indeed years of media propaganda related to Syria and its 'rebel' forces is now unraveling fast. 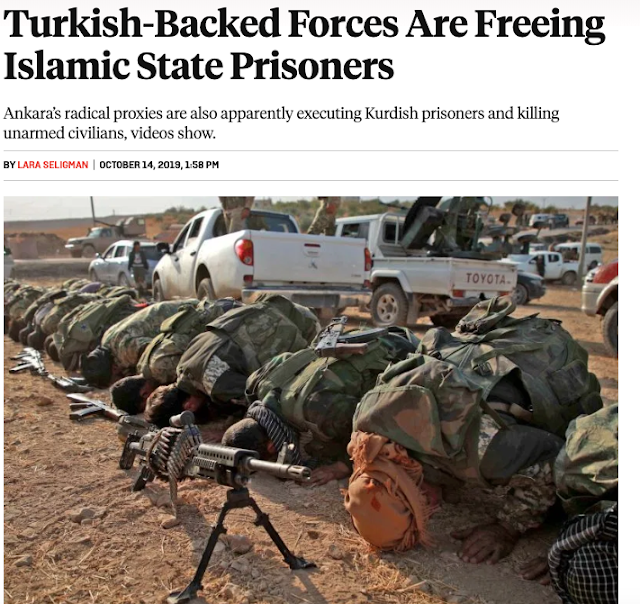 https://foreignpolicy.com/2019/10/14/turkish-backed-forces-freeing-islamic-state-prisoners-syria/?fbclid=IwAR2OOoYXRyCPsVNTxwReJsYv8eov2l13ykfz_Zsn7Bpe0GqaRoeT5F41nQg
Posted by seemorerocks at 15:22