Iraq does not want US troops


Not a HINT of this from western media

‘Taking legal action’: Iraq pleads with UN to kick unauthorized US forces out of country 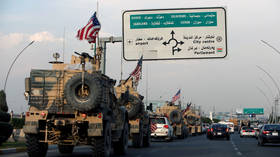 The Iraqi government is seeking international help after US troops withdrawing from Syria entered western Iraq without authorization, with Baghdad now taking legal action against the uninvited presence.
Baghdad did not give permission for US forces to stay in Iraq, Prime Minister Adil Abdul-Mahdi reaffirmed on Wednesday.

We ask the international community and the United Nations to perform their roles in this matter.

US Defense Secretary Mark Esper said Tuesday that US troops transiting from Syria would use Iraq to make preparations to go home and assured that the aim is not to "stay in Iraq interminably." Esper did not specify how long the American troops would be staying.

Washington removed its troops from northern Syria on foot of a Turkish offensive against Kurdish militias in the region, who Ankara regard as terrorists.

Turkey said on Tuesday that it would not launch a new offensive against the Kurds following a five-day ceasefire and President Recep Tayyip Erdogan's lengthy talks with Russian President Vladimir Putin in Moscow.

Turks appeased, Kurds saved, US gets breathing space: ‘Russia takes on job that US failed at’ in Syria

The US already has 5,000 troops in Iraq under an arrangement with the Iraqi government, but the agreement is a controversial one, with many Iraqis regarding it as continued occupation after the disastrous 2003 US invasion. 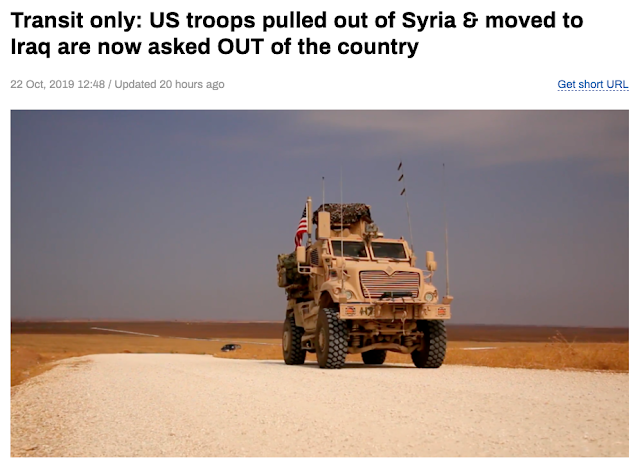 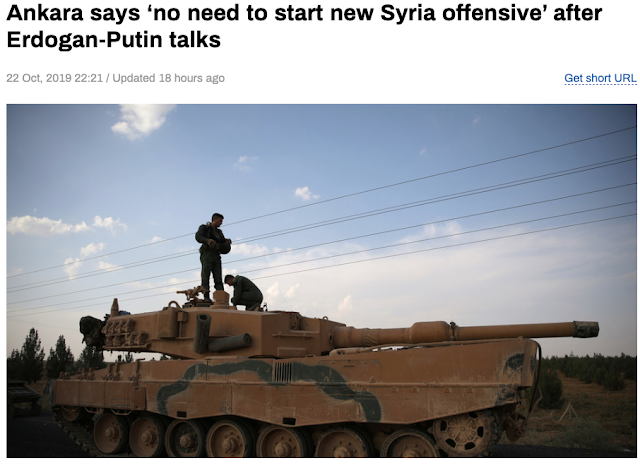 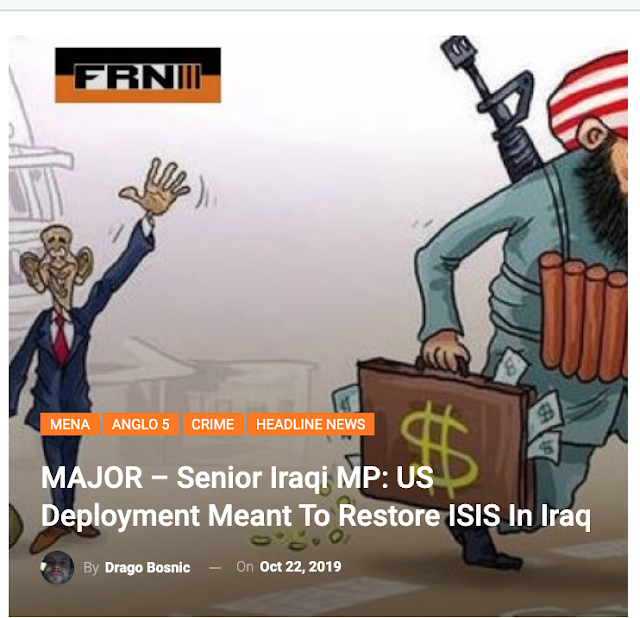 Turkey began on October 9 its illegal offensive in northern Syria to expel terrorist organizations, primarily the Kurdish-led Syrian Democratic Forces and the Islamic State according to Ankara, away from the Turkish border and to establish a safe zone in the northeast of the country to accommodate some of the millions of Syrian refugees currently in Turkey. However, Russian Defense Minister Sergey Shoigu has raised some interesting questions and warned of the danger of “reverse migration” of foreign terrorists to their home countries as Turkey has completely ignored prisons and camps holding the jihadists.

Shoigu revealed at the Beijing Xiangshan Forum yesterday that 12 jails and eight camps holding Islamic State terrorists and their family members have been left unattended by the Turkish military which “can lead to a surge of so-called reverse migration of terrorists back to their homeland.” In this context, he called on the international community to join forces to “face the challenges posed by terrorists, their ideology and propaganda.”

Shoigu then revealed that the Islamic State is now expanding into Southeast Asia after their defeat in Syria, specifically mentioning Indonesia, Malaysia, Singapore, Philippines and partly Thailand as part of their so-called ‘caliphate.’ Although just a few years ago terrorism “was not considered a major threat” to the countries of Asia-Pacific, “today in the region there is the activity of numerous extremist groups of which about 60 are classified as terrorists.”

“The Russian Ministry of Defense has enormous experience in this area, which we are willing to share with our partners in the Asia-Pacific region,” the Russian minister said, before he cited terrorist attacks in Sri Lanka in April 2019 as an example of the revived threat in the region, which had been relatively dormant for several years. “High activity of extremist organizations is now registered in the region, around 60 of such have been designated as terrorist groups,” the minister added.

Southeast Asia has been directly targeted by the Islamic State’s global strategy, with the number of fighters, suicide bombers, organized training programs, and propaganda videos originating from the region growing steadily over the years, despite not having a claim to physical territory anymore, explained Foreign Affairs magazine. With widespread reports that thousands of imprisoned Islamic State fighters are being ignored by Turkish-backed forces when they drive out the SDF from a certain area, Shoigu is correct to show concern that these fighters will flock to Southeast Asia when they escape from Syria.

Along with the devastating attack in Sri Lanka, in the Catholic-majority Philippines, the Islamic State has shown boldness and willingness to take on the Filipino military when it invaded the Muslim-majority southern city of Marawi on May 23, 2017 with government forces not taking the city back until exactly five months later. With this attack, along with vast network and experience terrorist organizations based in Indonesia and elsewhere in Southeast Asia have, Shoigu is not incorrect to assume that Southeast Asia will become a terrorist hotspot because of Turkey’s irresponsible behaviour with the imprisoned Islamic State fighters who have gained vast experience in Syria.

The Russian Defense Minister declared that Russia is willing to dialogue with the U.S. to ensure strategic stability as the current level of relations between the two major nuclear powers is unacceptably low, and although Washington are yet to respond to his expression of dialogue, addressing the security threat that released Islamic State fighters can have in Asia-Pacific must be a priority.

Although Turkey insists it is also fighting against the Islamic State in northeast Syria, there is little evidence it has done so, and rather its operation has been proven to be against primarily the SDF, led by the Kurdish People’s Protection Units (YPG) that Ankara recognizes as a terrorist organization. This is especially apparent as the Islamic State do not have an active presence in the northeast of Syria, and rather the only presence were the fighters and their families interned by the Kurdish forces.

The Russian Defense Ministry released information in December 2015 that alleges the Erdogan family was engaging in blood oil deals with the Islamic State. This would not be too far away in the mind of Shoigu. With it known that Turkey has maintained close links with the Islamic State, it must be rejected that they have a concern on the status of Islamic State fighters considering the country was the main gateway for foreign jihadists to enter Syria. An Islamic State commander told The Washington Post on August 12, 2014 that “Most of the fighters who joined us in the beginning of the war came via Turkey, and so did our equipment and supplies,” along with high-level members of the Islamic State getting treatment in Turkish hospitals. This is just one such example of Turkey providing support for the Islamic State that also includes providing intelligence, weapons, training, organization, finance, transportation and others.

With these deep relations between Islamic State and Turkey, there is little chance that Turkey will prevent terrorists from escaping prisons formerly controlled by the YPG. These radical fighters would be seeking a new jihad, and with over 60 jihadist groups in Southeast Asia, and showing a lot of potential as the Sri Lanka attacks and the invasion of Marawi demonstrates, this could be the next location for the international terrorists to conduct their jihad. This would not be an inevitable consequence of Turkey’s operation in northern Syria, but rather a known fact by the Turkish leadership. To what purpose Turkey is doing this is unknown, but there is little doubt it will have devastating affects on Southeast Asia as these Islamic State fighters bring with them a vast wealth of knowledge and experience from fighting in Syria that can embolden jihadists across the region.