Marine heatwave a factor in the West Coast's torrential rain 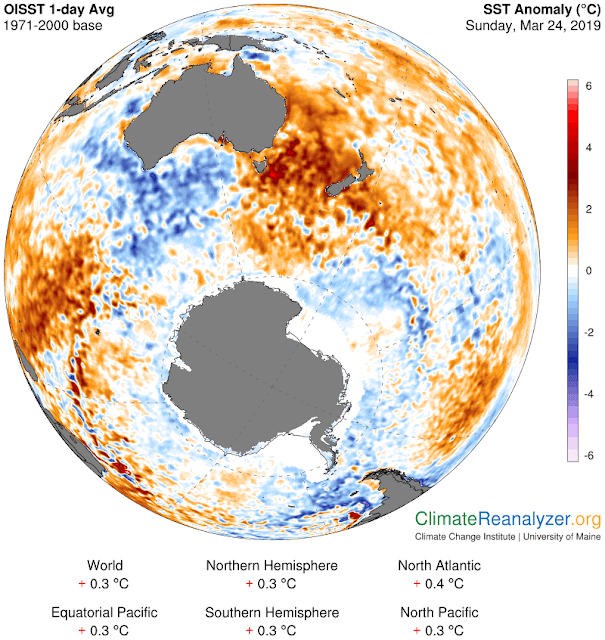 We've had the benefits of the marine heatwave - the hot summer days and warm seas. Now comes the downside - torrential rain.
Those western parts of the South Island tucked close in to the Southern Alps are in for the kind of deluge which the National Institute of Water and Atmospheric Research (Niwa) says occurs less than once a year on average.
Even on our traditionally wet West Coast you can't get more than half a metre of rain in the space of 36 hours without some extra help.
In this case, that's coming from the superheated Tasman Sea and a pipeline of tropical moisture extending from Australia and tropical cyclone Veronica, and former tropical cyclone Trevor.
READ MORE:* Heavy rain in South Island a 'significant weather event', Metservice says* What does marine heatwave mean for future of New Zealand's fish?* Warm seas fuelling major changes in weather patterns around NZ
Tropical Cyclone Veronica is still affecting the northwest coast of Western Australia, while ex-Tropical Cyclone Trevor lies over the Northern Territory and western Queensland.​
Niwa Weather meteorologist Ben Noll told Stuff, sea-surface temperatures in the Tasman Sea were still a lot warmer than average. A patch of sea northeast of Tasmania had a temperature of about 25 degrees Celsius.
"We haven't really retreated from the summer. That is amazing. And stretching right across a broad range of the eastern Tasman the seas are 3 or 4C above normal. It is still toasty.
"We often look at ocean temperatures in terms of one or three-month blocks. It is this persistence that will influence these types of weather systems.
"So when you have a weather system like this over those warmer heatwave seas, there's more water vapour available to the atmosphere for cloud and rain."
There was also a pretty clear "atmospheric river" - a tongue of moist, sub-tropical or tropical air - streaming from Australia across the Tasman Sea on to the West Coast, Noll said.
Some of this "extra moist" air had been wrapped up in the two tropical cyclones and was being siphoned across thousands of kilometres. When this air was forced to rise on meeting the Alps it produced torrential rain.
"The impacts of over 500mm of rain are potentially landslips, road and bridge washouts. On the positive side, the hydro lakes are in need of a fill and there's going to be spillover rain into those, with potentially 200-400mm of rain in the Waitaki catchment.
There would be a sharp drop-off in the amount of rain on Tuesday across the Canterbury Plains, with possibly 20mm or so later in the day reaching the coast near Christchurch, he said.
The heaviest falls south of about Hokitika would be on Tuesday morning, spreading further north in the afternoon.
The frontal system would find it hard going to make progress onto the North Island.
"It's running into that ridge and weakening a lot, but leaving a blob of moisture behind though, so we could see some North Island places getting some heavy rain on Wednesday and Thursday."


Such phenomenal West Coast rainfall was less likely in autumn than it would be in spring, Noll said.
Posted by seemorerocks at 19:17