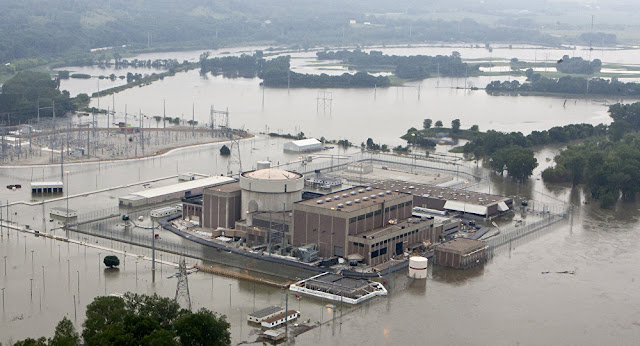 
With heavy rainfall inundating the US Midwest, nuclear power plants risk being flooded. However, the plants continue to operate at full power, resulting in the potential for “unnecessary, extremely high risk” accidents, according to Kevin Kamps, the Radioactive Waste Watchdog at the organization Beyond Nuclear.


"In Nebraska alone, you've got the Offutt Air Force Base, which is the home of the [US] Strategic Command, which controls the nuclear arsenal of the US, and it's largely flooded," Kamps told Radio Sputnik's Loud & Clear hosts Brian Becker and Nicole Roussell.

Listen to "Beyond Nuclear with Kevin Kamps" on Spreaker.

According to Offutt Tech. Sgt. Rachelle Blake, around 60 buildings on the south end of the base, including the 55th Wing headquarters and two aircraft maintenance hangars, were flooded over the weekend by as much as eight feet of water. The 55th Wing is a US Air Force unit assigned to Air Combat Command.

"You've also got two nuclear power plants in Nebraska. You've got Fort Calhoun, north of Omaha on the Missouri [River], which thankfully shut down in 2016. And the reason it shut down was the previous historic floods on the Missouri in 2011 damaged the Fort Calhoun nuclear power plant, [so] that it never recovered. But you've also got the Cooper atomic reactor south of Omaha on the Missouri River, and yet again, for the second time, in 2011 and [now in] 2019, Cooper — which is being run by Entergy Nuclear of New Orleans on behalf of a public utility in Nebraska — ran at 100 percent power levels through these historic floods. For the industry, that's the bragging point: ‘Look at what we can do,'" Kamps noted.

"It's a Fukushima-like situation, where you're dealing with a natural disaster and insisting upon operating at 100 percent power levels with your atomic reactor. Granted, Japan didn't know that natural disaster was coming. And so, the danger is, if you lose power from the grid, and then your emergency diesel backup generators fail, you can't control the cooling on those hellishly hot atomic reactor cores," Kamps explained.

"In addition to the reactor risks, there are radioactive risks, which are still present at the shut-down Fort Calhoun but also at Cooper, both in the storage pools, which can go up in flames, but also in the dry casks that could be impacted by the floods. They [Omaha Public Power District, Entergy Nuclear] might have dodged a bullet again in 2019, but they keep taking these unnecessary, extremely high risks with their operations," he added.

In March 2011, the Fukushima Daiichi nuclear plant in Japan's Ōkuma, Fukushima prefecture, was hit by a 46-foot tsunami triggered by a 9.0-magnitude offshore earthquake. The natural disaster crippled the facility's cooling system and resulted in the leakage of radioactive materials, hydrogen-air explosions and eventually the plant's shutdown, Sputnik previously reported.

On Monday, the Nebraska Public Power District (NPPD) announced that the Cooper Nuclear Plant was continuing to operate safely.

"We are operating at full power, and the water is receding… and we expect the water level to continue dropping," NPPD spokesman Mark Becker said, according to Reuters. In addition, he noted that the plant was 899.75 feet above sea level Monday morning, below the 901.5 feet that would require the nuclear reactor to shut down.

"It happened at Fukushima. All of a sudden, an hour after that earthquake in Japan, that wall of water — 45 feet deep — hit the nuclear plant and hit the last remaining power sources, which were the emergency diesel generators. So, here in Nebraska, there is renewed potential for those upstream major upstream dams to fail, [to] send a wall of water down. Another danger at both Fort Calhoun, with the stored waste, but also at Cooper with the operating reactor and the stored waste: if local levees were to fail and allow flood waters to inundate the sites even deeper," Kamps noted.

"At Fort Calhoun, just now, they came within one foot, nine inches of having to shut down under their own very loose and weak protocols. That's how close it came. So, it's incredible the risks that they [NPPD, Entergy] take. If they had any responsibility, they would shut down."

According to Becker, the US Army Corps of Engineers has reduced water releases from the Gavins Point Dam to decrease the risk of flooding downriver.

"And to give some credit, Fort Calhoun in 2011 did shut down months ahead of time — in April — because they saw what was coming with the snow melts; they had enough predictions. They [NPPD] shut down months ahead of time, and even though they did, they were so damaged by the floods, and they still screwed up and had a fire burning within the turbine building that nobody dealt with. That final straw of the fire not being dealt with days on end, that's what led to the final shutdown several years later. Dodging radioactive bullets is not fun stuff, but it's kind of what they do for a living," Kamps noted.