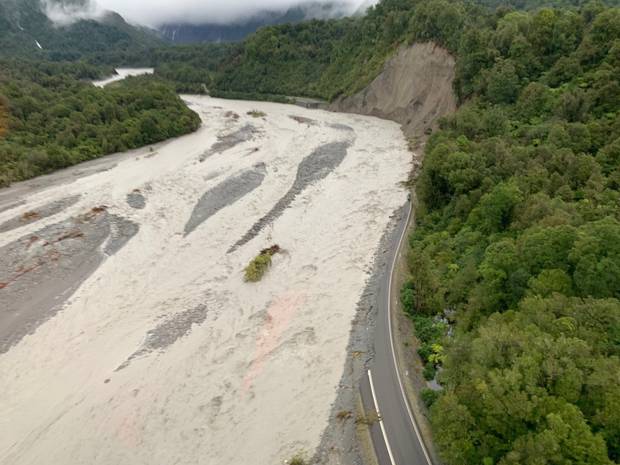 Record rainfall has hammered the West Coast, with a woman's body found after she was swept away by the floodwaters and a bridge left in ruins.
In the last 48 hours, Cropp Waterfall has recorded 1086mm of rain - the highest level for that time period on record, says Niwa Weather.
The heavy rainfall has eased in the area and was now making its way through Wellington and Taranaki. People in the area are being advised to keep up to date with the forecasts.
Police said the body of Gloria Reardon-Hirst, 66, of Arahura Valley was found in the Arahura Valley, north of Hokitika, just after 9am today.
"An initial scene investigation appears that the woman got out of the vehicle she was driving and tried to cross the floodwaters on foot."
A police spokeswoman said the woman had then been swept away in the strong-flowing current of surface flooding on Arahura Valley Rd.
"The investigation is ongoing, and her death will be referred to the Coroner. Our thoughts are with the family at this sad time," the spokeswoman said.
The extreme weather front caused major flooding and demolished the Waiho River bridge on the West Coast, closed major roads and schools and forced evacuations.
A state of emergency remains in place in Westland and is expected to be lifted "today or tomorrow".
Multiple roads remain closed on the West Coast due to the damage caused by the floods. However, State Highway 73 from Otira to Kumara Junction has been reopened.
An update on State Highway 73 from Arthurs Pass to Jacksons is expected this afternoon.
Prime Minister Jacinda Ardern said she had been briefed on the flooding and officials were working as quickly as they could.
"And the NZTA, particularly, to restore links where there has been that lost bridge.
"I'm advised seven to 10 days until that connection is restored," Ardern said.
Aerial photos taken for the Department of Conservation reveal the staggering impact of the floodwaters - washing away a bridge and gouging giant chunks out of roads. 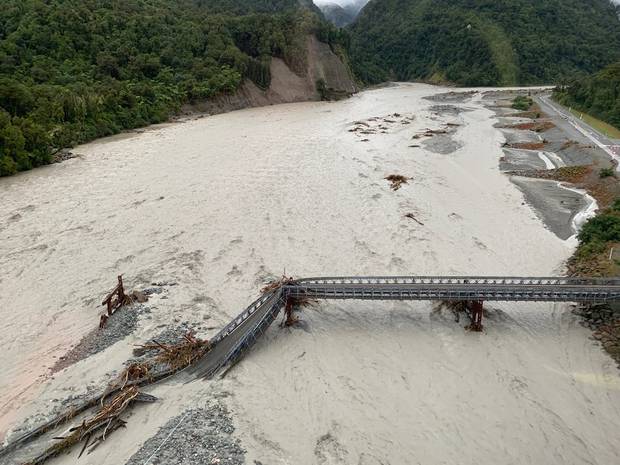 Aerial photos have revealed the scale of the damage at Franz Josef. Photo / Wayne Costello, DOC 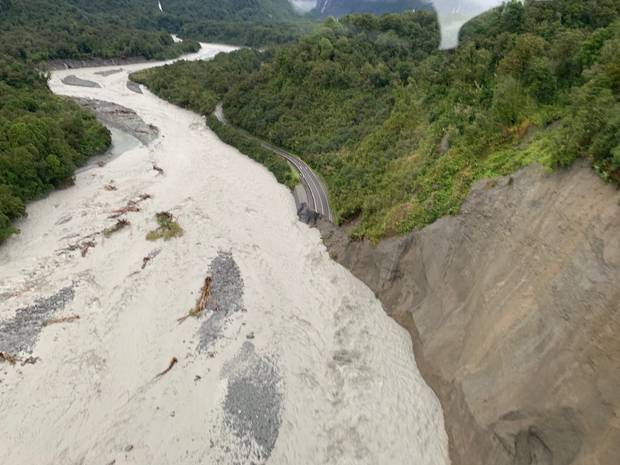 A large section of road has been completely washed away. Photo / Wayne Costello, DOC 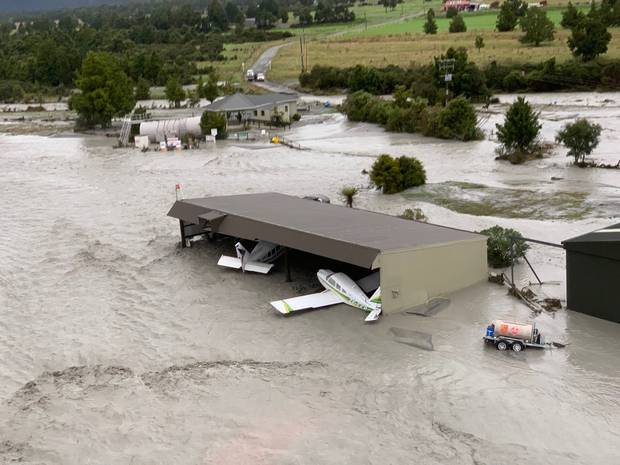 The flood waters have swamped planes in the area. Photo / Wayne Costello, DOC

The washed away chunk of highway. Photo / Wayne Costello, DOC
Civil Defence Minister Kris Faafoi and West Coast MP Damien O'Connor today flew over parts of the West Coast that were deluged by heavy rain over the past couple of days.
The flooded Waiho River destroyed a bridge near Franz Josef on State Highway 6 yesterday, cutting a vital link on the West Coast.
Faafoi said the New Zealand Transport Agency had advised the bridge - a prefabricated "Bailey bridge" - would take about a fortnight to replace.
"It's good news which locals were certainly happy about because it's a lifeline for the rest of the West Coast and the tourism trade as well," he told the Heraldfrom Hokitika.
Another infrastructure issue was a stretch of road on the southern side of the river which had been destroyed by a large slip.
"I've been in touch with [Transport Minister] Phil Twyford already. We're thinking about what we can do to assist there."
Faafoi said the West Coast was used to bad weather, recalling he visited just over a year ago after cyclones Fehi and Gita.
"They're used to extreme weather here on the coast. If you're talking to the community they'll say 'yes, that's a lot of rain' but it's not as much as they've seen.
"I think they're not surprised that this weather's come but obviously it's had an impact on a pretty important piece of infrastructure," he said.
Faafoi offered his condolences to the family of 66-year-old Gloria Reardon-Hirst of Arahura Valley north of Hokitika.
Faafoi said it was important that communities were given the messages during bad weather to keep non-essential travel to a minimum.
Niwa confirmed this afternoon that 1086mm of rain in 48 hours had been recorded at the Cropp Waterfall station on the West Coast, a new record.
Cropp River is also the site of the highest ever recorded annual rainfall more than 18,000mm.
MetService meteorologist Kyle Lee said most weather stations along the coast had recorded just under 200mm since the rain event started between late Sunday and early Monday.
Stations inland were hitting well above 200mm, with one station even recording around 1000mm.
Tourists were kept in the small West Coast town yesterday by treacherous road conditions also north to Hokitika.
With many travellers planning to head south from Franz Josef to the Wanaka and Queenstown areas, they would have to make new plans today.
Flooding hasn't only been restricted to rivers. Surface flooding has also resulted in road and school closures throughout the region.
The Insurance Council of New Zealand (ICNZ) has put out storm preparation and flood recovery tips for those affected by the severe wet weather currently battering the West Coast.
ICNZ chief executive Tim Grafton said it was important communities looked out for each other in times like these.
"Check on your neighbours and friends and make your properties as storm-safe as possible without putting anyone's personal safety at risk."

Tips for preparing for a storm

• Make sure your emergency kit is well-stocked. If you're not sure what to include, check out getthru.govt.nz.
• If there's a chance your house will flood, move electrical items off the ground and unplug them.
• If you're near the coast or a waterway, park your car in the garage or move it to higher ground.
•Clean out blocked gutters and drains before any rain begins. If your roadside drains are blocked, call the local council.
• Take down outdoor umbrellas and bring in or tie down outdoor furniture where possible. If you have a trampoline, turn it upside down to minimise the surface area exposed to wind.

Tips for recovering from flooding

• Do not do anything that puts your safety at risk or causes more damage to your property.
• Contact your insurer or broker as soon as possible.
• Take photos of any damage. It will help speed up assessments of your claims.
• Don't enter floodwater, and don't operate cars or appliances that may have been flooded.
• Get essential services repaired and keep copies of invoices.
• Make your home safe and sanitary but don't do non-essential repairs.
• Always wear protective gear, including gloves and masks, in case you're exposed to hazardous material.

I’ll believe it when it happens. The prediction has been made several times and the temperatures where I live are still in the 20’s, even at midnight


You need SUSTAINED rain to break a kong-term drought, not a single weather event.

Maybe not the forecast, but the message is fake - false hope. 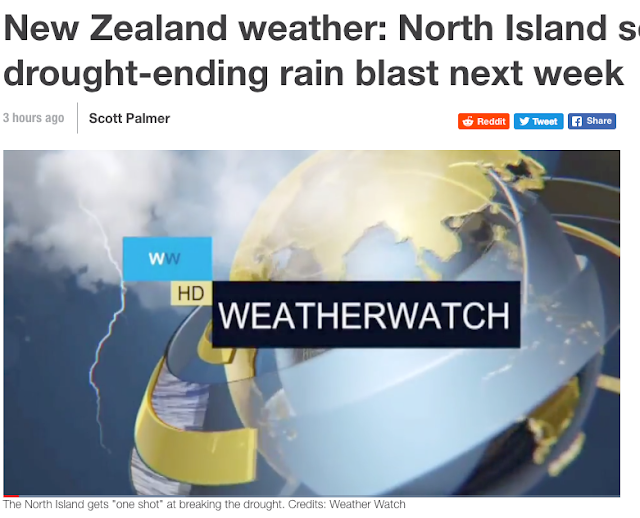