Catastrophic flooding in US Midwest

Catastrophic Flooding In Midwest Could Last "For Months", Threatens US Food Production


Authored by Michael Snyder via The End of The American Dream blog,

The worst flooding disaster in the history of the Midwest is just getting started, and as this crisis unfolds we are all going to be feeling the pain.

The “bomb cyclone” that recently brought hurricane-force winds and blizzard conditions to the middle of the nation was the spark that set off this catastrophic flooding, and now all of the snow from one of the snowiest winters in decades is going to be feeding into rivers that have already shattered all-time flood records.

As you will see below, most of the Great Plains and Upper Midwest is currently covered by more than 10 inches of snow, and all of that water has to go somewhere.  As all of that snow melts, we are going to witness an agricultural disaster that is far beyond anything that we have ever seen before in modern American history.

If you think that I am exaggerating even a little bit, please read this article all the way to the end.

As I did research for this article, I was floored by the immense devastation that has already taken place.  But if the crisis was over, at least farmers could start picking up the pieces.

Unfortunately, the crisis is not over.  In fact, Iowa Governor Kim Reynolds is saying that we are “just getting started”.  The following comes from a USA Today article entitled “‘It looked like an ocean’: Severe Midwest flooding could last all spring”…

Gov. Kim Reynolds is warning Iowans what millions of Midwesterners have come to understand in recent days – the severe flooding that has swamped much of the regionmay be a long way from over.

Reynolds said the snowmelt and spring rains could create additional flooding in the weeks ahead because of compromised levees.

“We’re in for the long haul. We’re just getting started,” said Reynolds, who added that her tour of western Iowa this week had revealed unprecedented flooding. “It looked like an ocean.”

This was one of the worst winters for the middle part of the country that we have seen in ages, and now we are entering melting season.

According to Bloomberg, the amount of snow currently covering the upper Midwest and Great Plains is absolutely staggering…

At least 91 percent of the upper Midwest and Great Plains is snow covered to an average depth of 10.7 inches, according to the U.S. National Operational Hydrologic Remote Sensing Center in Chanhassen, Minnesota. The center tracks snow nationwide and sends out airplanes to measure its depth.

So what is going to happen when all of that snow melts and starts pouring into the major rivers?

Needless to say, this is beyond a “worst case scenario” for countless numbers of Midwest farmers.

I am going to share with you some excerpts from mainstream news reports about the devastation that we have already witnessed.  After reading each excerpt carefully, I think that you will agree with me that we are literally facing a national food production nightmare.

At this moment, millions of acres of farmland are underwater, and that is not going to change any time soon.

When the flood waters came, they moved so rapidly that they literally picked up pigs and baby calves and carried them along.  Roads, rail lines and entire small towns have been washed away, and so even if farmers had something left to sell they couldn’t get it to market anyway.

We have also witnessed the loss of massive stockpiles of wheat, corn and soybeans that had already been harvested.  The following comes from Reuters…

As river levels rose, spilling over levees and swallowing up townships, farmers watched helplessly as the waters consumed not only their fields, but their stockpiles of grain, the one thing that can stand between them and financial ruin.

“I’ve never seen anything like this in my life,” said Tom Geisler, a farmer in Winslow, Nebraska, who said he lost two full storage bins of corn. “We had been depending on the income from our livestock, but now all of our feed is gone, so that is going to be even more difficult. We haven’t been making any money from our grain farming because of trade issues and low prices.”


According to the U.S. Food and Drug Administration, flood-soaked wheat, corn and soybeans are considered to be “adulterated” and they must be destroyed.

And thanks to the ongoing trade war with China, farmers had a staggering amount of wheat, corn and soybeans stored on their farms right now…

As of Dec. 1, producers in states with flooding – including South Dakota, Nebraska, Kansas, Minnesota, Iowa, Missouri, Wisconsin and Illinois – had 6.75 billion bushels of corn, soybeans and wheat stored on their farms – 38 percent of the total U.S. supplies available at that time, according to U.S. Department of Agriculture data.

Are you starting to get the picture?

In one county alone, more than a million bushels of corn are sitting under the floodwaters at this moment…

Fremont County farmers estimate about 390,000 bushels of stored soybeans and about 1.2 million bushels of stored corn are under water. And Jorgenson said more of last year’s grain was being swallowed up Tuesday as the Missouri River crests.

At local cash prices for corn and soybean, that’s about $7.3 million farmers may be unable to replace. And that’s just one county, Jorgenson noted.


Ladies and gentlemen, food prices are about to start soaring in a major way.  There has not been such a massive blow to U.S. food production in my entire lifetime.

For many farmers, this truly is the end of the line.  One of the farmers that has reached his breaking point is 23-year-old Clint Pischel…

“When you’re losing money to start with, how do you take on extra losses?” asked Clint Pischel, 23, of Niobrara, Neb., whose lowland fields were flooded by the ice-filled Niobrara River after a dam failed. He spent Monday gathering 30 dead baby calves from his family’s ranch in this northern region of the state, finding their bodies under huge chunks of ice.

Can you imagine losing 30 baby calves and not being able to do anything about it?

But Doug and Eric Alberts were hit even harder.  They lost nearly 700 animals to the floodwaters…

Doug and Eric Alberts are trying to round up the surviving hogs on their 9-acre farm in Fremont, Nebraska. There aren’t many. The family estimates they were only able to save 14 out of 700 of their livestock.

The father and son have worked for three years to build this business. Then, a few days ago, the water came.

Within minutes, 7 feet of water covered their farm.


Even before the flooding, farm bankruptcies had hit the highest level since the Great Recession, and now those numbers are going to explode much, much higher.

In addition to everything else, all of this flooding is causing massive topsoil erosion.  We had already lost over half our topsoil, and we aren’t too far from an apocalyptic situation…

And severe winter and spring floods take another toll that’s much more difficult to quantify: Soil loss, on a grand scale, right in the region that provides a huge amount of our food supply. The Midwest boasts one of the globe’s greatest stores of topsoil, more than half of which has been lost in the past 50 years. Topsoil is the fragile, slow-to-regenerate resource that drives agriculture. As University of Washington ecologist David Montgomery explained in his terrific 2007 book Dirt: The Erosion of Civilizations:

“With just a couple feet of soil standing between prosperity and desolation, civilizations that plow through their soil vanish.”


I wish that I could accurately convey the seriousness of what we are facing.
Food production in the United States is going to be way, way down this year.  Prices at the grocery store are immediately going to start rising, and they are going to keep rising all year long.  So now is the best time to stock up and to get prepared for what is coming.  Our breadbasket has been absolutely devastated, and things are only going to get worse.  The mainstream media seems to think that this is just another in a long string of major natural disasters that has hit our nation in recent years, but the truth is not so simple.  This disaster is going to have a dramatic impact on our ability to grow our own food, and even if everything went perfectly from this point forward we are talking about a recovery that would take many, many years.

As I conclude this article, I would like to share with you an extended excerpt from something that was posted on Facebook by Cane Creek Mercantile…

Stories have slowly been surfacing, and images have been taken showing the complete and utter chaos Nebraska is currently in. Images of farmers and ranchers wading through the water carrying hay to the haggard cattle, and frightened horses… Using a Deweze feed box to pull near frozen sheep from what would be a snowy grave… Using aluminum scoop shovels to quite literally tunnel out buried bulls. Taking tractors into the mud and slop to skillfully grab ahold of cows who are stuck in belly deep mud and carry them to safety and feed. Highway patrol officers helping free baby calves that had been quite literally frozen to the ground. The list of things go on. Our ag community is working night and day to save each and every animal that they can, sacrificing sleep, food, and their own well-being to provide the livestock those very things. Our farmers and ranchers, and neighbors of the rural communities around the nation are banding together to ensure that help will arrive.


With these things being said, there will be death loss, and sadly in staggering numbers. Fields that are normally used for growing beans, corn, and grain for example… All are under tons of snow or several feet of water. This means these fields will more than likely not produce a crop this year, which will drive prices up throughout the year and into the future until we as a nation can recover further down the road.

But please, keep in mind why that is when you go to the grocery store, and remember just how many are affected by this disaster.

There will be families that have lost everything. They lost equipment, their houses, sheds, tools, and worst of all, their animals they care deeply for. Their livelihoods are being stripped from them in the most painful manner possible. Many will no longer be able to live the life they’ve known and loved their entire life. They will be displaced, and times for them will be harder than anything anyone will ever have to face. So, when you are at the grocery store, please keep in mind the cause for the prices climbing up, and instead of getting frustrated and complaining for having to pay more, be thankful for what you have and say a prayer for the folks suffering in Nebraska.

The “new normal” along the Mississippi River, the Missouri River and other major rivers in the middle part of the country is going to mean much, much higher prices at the grocery store.

These days, a full cart of groceries can easily run $200 or more.

So how bad will things ultimately get as this crisis continues to unfold?

We are facing something that we have never faced before, and nobody is quite sure what is going to happen next. 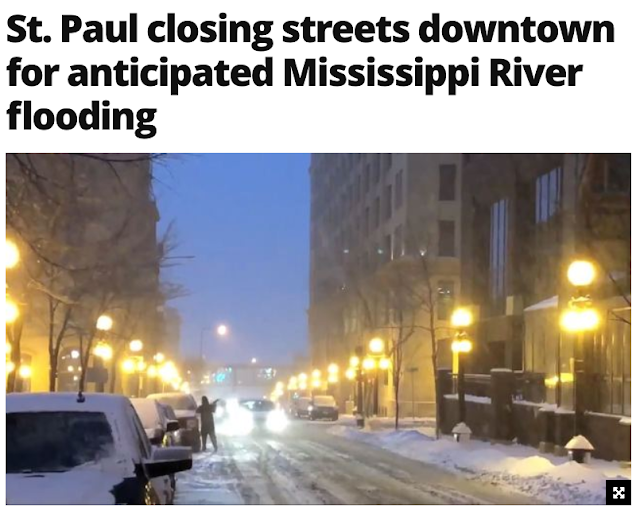 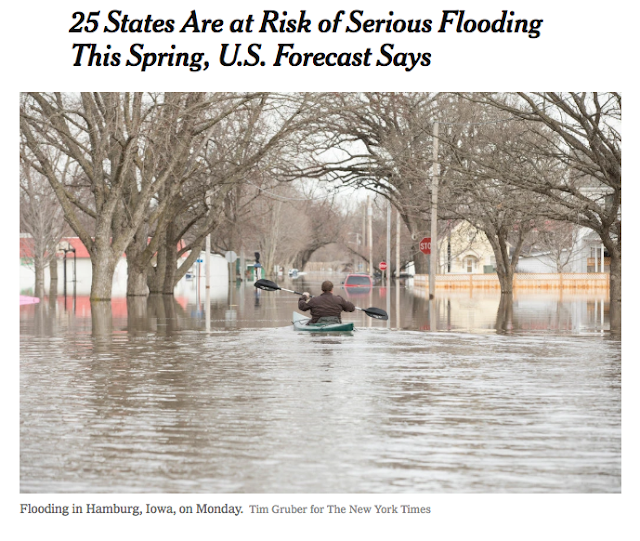 25 States Are at Risk of Serious Flooding This Spring, U.S. ForecastSays