RT on the suppression of free speech in New Zealand


Top news on RT this morning 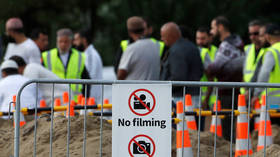 RT,
24 March, 2019
New Zealand’s chief censor has banned mosque shooter Brenton Tarrant’s white supremacist manifesto, as well as videos of his violent rampage. The bans have ignited a debate over free speech in the grieving country.
Chief censor David Shanks declared the killer’s 80-page manifesto – entitled ‘The Great Replacement’ – “objectionable”on Saturday, and ordered anyone in possession of it to destroy it.
“New Zealanders can all play a part in denying those who exhort hatred, killing and terror,” Shanks said. “Do not support the murderous objectives of its author by republishing or distributing it.”

Jets, nukes & plasma rifles? New Zealand police flooded with fake gun surrender requests
Following the classification, anyone caught with the document on their computer could face between 10 and 14 years in prison. Video footage of the attack, originally live-streamed by Tarrant on Facebook, has also been deemed objectionable. A teenager has already appeared before Christchurch District Court last week for allegedly sharing the banned video.
The attempt to scrub Tarrant’s views from the internet follow Prime Minister Jacinda Ardern’s “global call” to fight the “ideology” of racism. Ardern pledged to “to weed it out where it exists and make sure that we never create an environment where it can flourish.”
Free speech advocates, however, are concerned with Ardern’s censorship-heavy approach.
“People are more confident of each other and their leaders when there is no room left for conspiracy theories, when nothing is hidden,”Stephen Franks, a constitutional lawyer and spokesman for the Free Speech Coalition, told AP. “The damage and risks are greater from suppressing these things than they are from trusting people to form their own conclusions and to see evil or madness for what it is.”
Speaking about Tarrant’s first-person-shooter-style video, counterterrorism expert Jennifer Breedon told RT that banning such videos does nothing to prevent future attacks. “We need to stop putting band-aids on gunshot wounds,” she said. “We’re spending so much time talking about ‘we can’t have videos like this’...rather than answering questions that need to be asked.”
Commentators on social media chimed in.
Free speech is protected in New Zealand by the 1990 Bill of Rights Act. “Everyone has the right to freedom of expression, including the freedom to seek, receive, and impart information and opinions of any kind in any form,” the Act reads.
However, the protection is not as legally watertight as the US’ First Amendment. In the case of Tarrant’s manifesto, Shanks argued that the Act doesn’t apply. “It promotes, encourages and justifies acts of murder and terrorist violence against identified groups of people,” he said. “It identifies specific places for potential attack in New Zealand, and refers to the means by which other types of attack may be carried out.” Shanks’ censors, therefore, treated the manifesto the same as propaganda from terrorist organizations like the Islamic State.
Zero Hedge, LiveLeak blocked, sharers warned of jail as NZ censors crack down on mosque attack video
Before Shanks declared the manifesto verboten, New Zealand’s internet service providers gladly censored it themselves. Any site that may have hosted the killer’s polemical screed was blacklisted, with the censorship even spilling over into neighboring Australia, where internet users were locked out of 4chan. With New Zealand’s ‘objectionable content’ laws allowing corporations to be fined up to NZ$200,000 (US$173,000) for sharing the video or any related content, their willingness to self-censor is unsurprising.
However, some applications of censorship have left commentators puzzled. Kiwi journalist Nick Monroe – himself skeptical of the government’s censorship efforts – complained that any of his commentary on the shooting was being removed seconds after upload.
Likewise, a nationwide chain of booksellers responded to the shooting by pulling copies of psychologist Jordan Peterson’s self-help book ‘12 Rules for Life’ from its shelves, citing “disturbing” photo that had emerged of Peterson with a fan wearing a “Proud Islamophobe” t-shirt. Bizarrely, the bookseller has continued to stock copies of Adolf Hitler’s ‘Mein Kampf.’
Perhaps the most famous piece of extremist literature in the world, Mein Kampf has been banned in some European countries and in Russia. Reprints of the book were forbidden in Germany until 2016, when the work entered the public domain.