Crisis-solutions.com and the other firms offering "crisis simulation"


Unless we are of a slightly-paranoid mindset or unless we have researched this deeply it is difficult for the average, decent person to even conceive that it is possible for terrorist attacks to be simulated either by "crisis actors" or a "drill-gone-live".

We simply cannot conceive that it is even POSSIBLE for people to be so warped, so evil that they can carry out such acts so the usual and reasonable response is one of denial - "it can't be possibe".

But unfortunately it is all too possible and some people come pretty close to telling us that is what they do.

My ears pricked up when I heard researcher Ole Dammegard mention a firm called crisis-solutions.com because I realised that I had heard about this before.

A couple of years ago Debbie the Sane Progressive went into all this and identified different firms in the US and the UK that offer their services in crisis simuation.

Unfortunately, Debbie is no longer active for whatever reasons and has removed all her videos from the internet. I still have some videos which I have put on a private setting which I will not share out of respect for her wishes.

The researcher,Ole Dammegard talked about this in this segment from his interview with Vinny Eastwood.

I have decided to go back and check the material I hold on these companies as well as some new situations.

I hope it will be sufficient, taken with other evidence to convince you that this is real and certainly real. 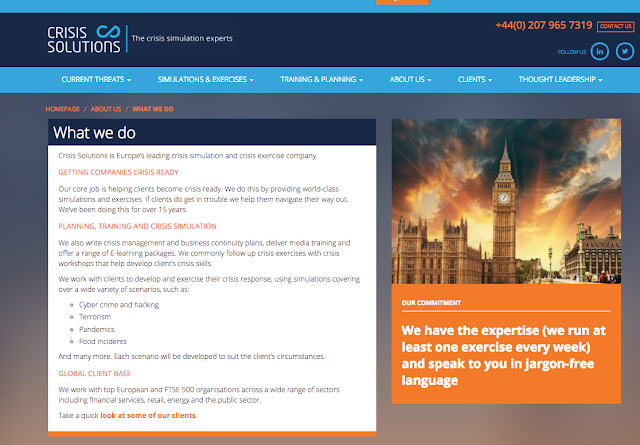 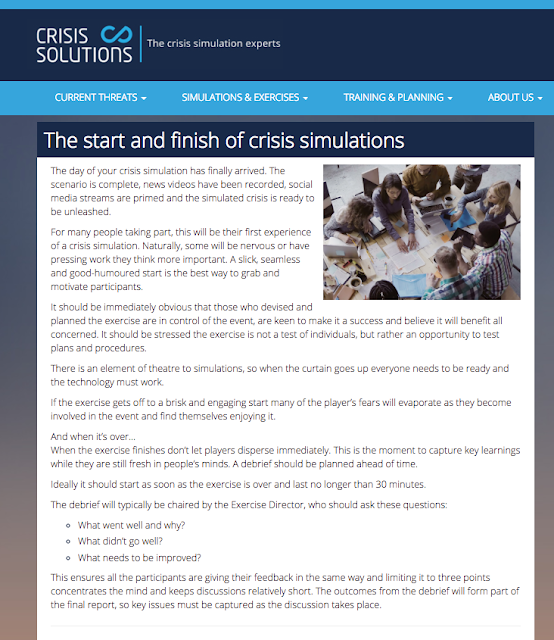 Here is a video they have put out. 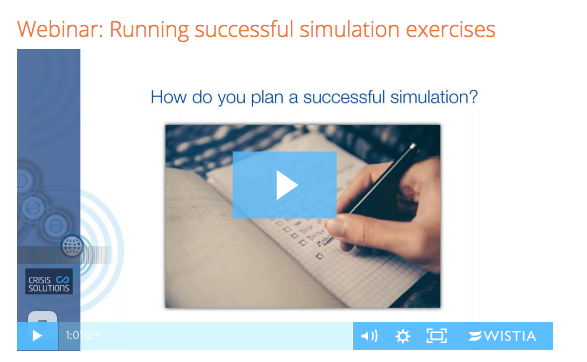 Here is a company, Crisis Cast,  talked about in some detail by Debbie Sane Progressive 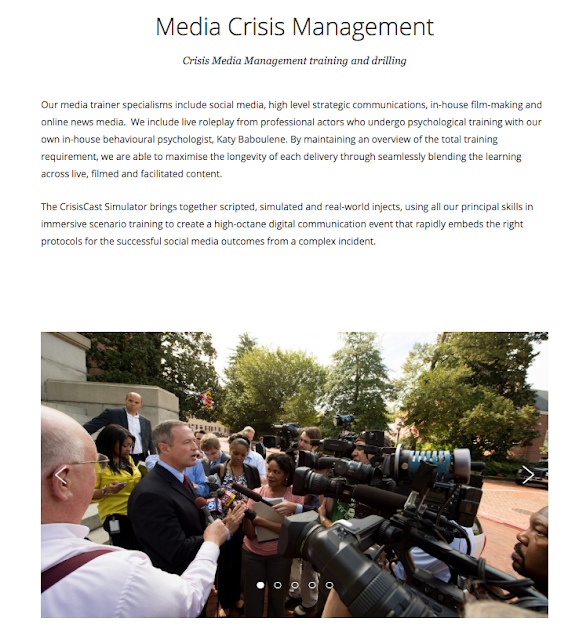 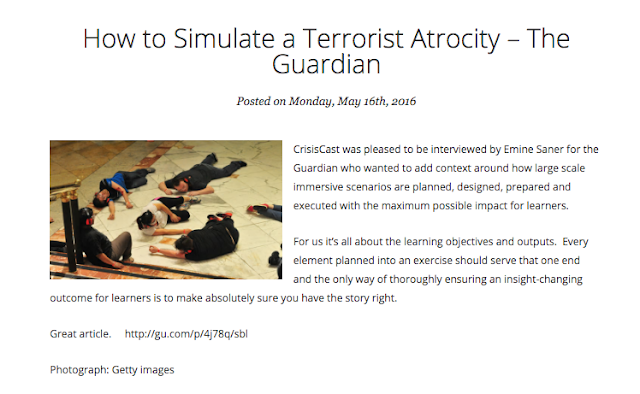 
Shawn Helton
21st Century Wire
Truth is often stranger than fiction when looking at the bizarre phenomena surrounding many mass casualty incidents – and the Orlando Pulse nightclub shooting was no exception.
It was recently revealed that the world’s largest security firm G4S, who had employed the man named in the Orlando pulse nightclub shooting, Omar Mateen – is a client of the mass casualty staging company called CrisisCast.

‘STAGING REALITY’ – CrisisCast specializes in replicating mass casualty events. (Screen Capture from Crisis Cast)
Training for Disaster
The heavily-stylized company CrisisCast, appears to be a revamped version of the Visionbox Crisis Actors project (a crisis actor production emerging after Sandy Hook), with a professional team of actors, elaborate film crews, expert producers and theatrical effects makeup squads mimicking real-life injuries (additional prosthetics) – all focused to deliver a simulated crisis-likereality to the public, later to be managed accordingly through their public relations division via various forms of social media.
RELATED: (VIDEO) ‘Active Shooter’ and ‘Terror’ Drills: The Truth WILL Shock You
In CrisisCast‘s ‘about’ section we see a sophisticated amalgam of emergency protocol disaster training combined with “internationally credited film crews,” that bring their high-end stagecraft to life, through a collection of “role players, stunts, medical simulations and combat flashpoints,” cloaked in visual tricky, with film techniques out of the UK and Australia, so says the group’s website.
Below is a road traffic collusion demo created by lead CrisisCast producer/founder Brian Mitchell (has worked on Hollywood studios and holds National security clearance) featured on Vimeo. The scenario is filmed from multiple angles, with quick cut editing that disorients, as we see an individual (crisis actor) in the aftermath of a crash – struck by the emotional weight of the scene – screaming out to a gaggle of onlookers after witnessing the staged carnage. The strange episode leaves one with a feeling of phantom trauma that continues to lurk.
When recreating large scale mass casualty incidents, Cast may also make use of “pyrotechnics, wardrobe, special effects, covert and aerial footage,” depending on the clients needs.
In a passage from their ‘solutions’ section, an outline to basic formatting for a simulated crisis is revealed:
“Our producers work with your trainers to create a ‘script’ that enables the role play actors to know when to trigger key developments in an evolving crisis management scenario. We brief and rehearse the team – where possible on location – but at least with video surveillance footage.
Heads of department manage each discipline and report to the lead producer who is your direct contact at all times.”
In addition to stage-managing a crisis scenario with a highly fluid production team, Cast also centers its strategy on “lockdown and evacuation procedures, [with] the ability of emergency services to co-operate, “ and the ever important task of having the “joint ability to respond to the press,” in a partnership with the company’s clients through a multitude of social media platforms on the internet. The ‘crowdsourcing’ techniques employed by Visionbox Crisis Actors comes to mind. 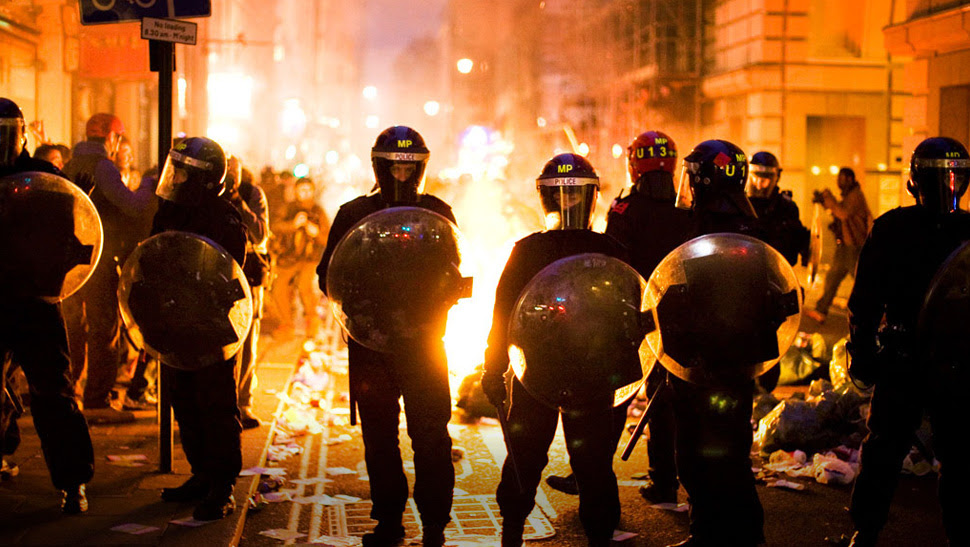 ‘OUR CRISIS’ – A promotional shot from CrisisCast’s website featuring a riot scene in London. (Image Scource: crisiscast)
“Nothing works as effectively in dealing with real-world disasters as rehearsal.” – CrisisCast
Also note worthy, Cast states, it has the ability to create “highly credible, dramatic scenarios to bear preparing your people for the worst,” employing both “psychological and practical tools,” in their disaster training – all the while making sure that role playing actors, as well as crew have signed non-disclosure agreements (NDA’s) before each scripted event. Here’s another passage depicting the kind of psychological implementation used to achieve a successful Cast simulation:
“Our role play actors are psychologically trained in criminal and victim behaviour. They bring intense realism to simulated mass casualty incidents on the battlefield, during kidnap and ransom and emergency evacuation situations and in hostile threat incidents in urban or public places.
In so doing, CrisisCast provides learners with an irrevocable first encounter with the emotional challenges of any hostile incident.”
Other clients of Cast include The London City Airport and UK Trade & Investment, along with many other leading companies worldwide.
From CrisisCast to Hollywood…

Also featured on Cast‘s website, Francesca Hunt (Professional actress and lead producer and co-founder of CrisisCast), explaining why ‘authentic’ stress behaviors are so important when recreating a crisis.
.According unitedagents.co.uk, Hunt herself is a theater trained actress, having studied at Oxford (1983-86) graduate, Bristol Old Vic (1987-89) and Moscow Arts Theatre 1989. She has been featured in several Hollywood films such as “Charlie and the Chocolate Factory (2005), Strathblair (1992) and A Prince Among Men (1997) on her IMDB page.” The page also states she is married to Brian (Mitchell?, CrisisCast Founder?).
***
Here is an American firm, Crowds on Demand, that offers everything you need to produce a protest or rally - on demand 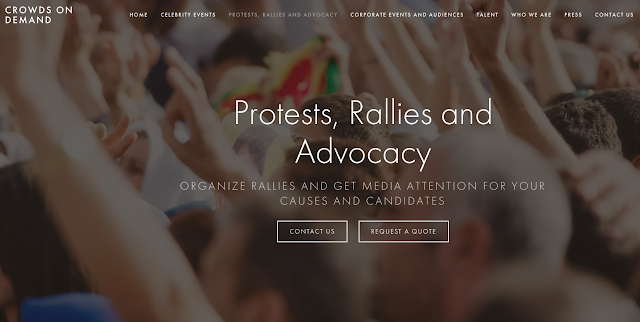 This company, which does not seem active any more (at least on the Web) offers all forms of simulation which speaks for itself. 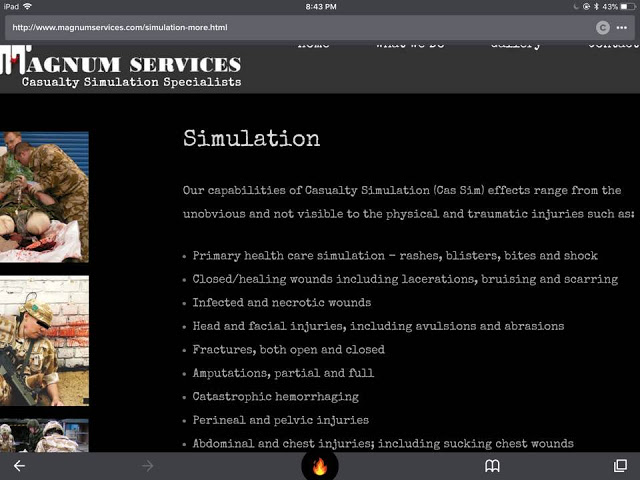 Finally here is an advertisement for a seminar that was held in AUCKLAND, NEW ZEALAND earlier in March, 2019.

We do not know much about them but we can surmise that they have much in common with the above mentioned firms. 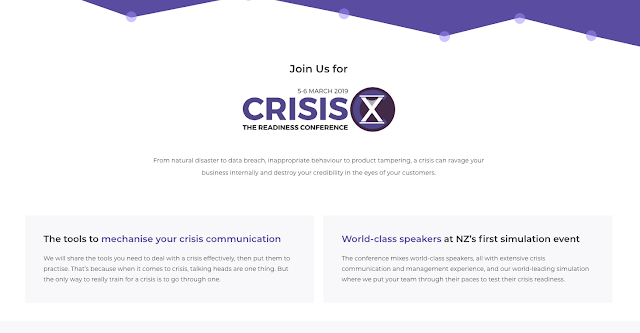