Is ice nucleation being used to mask melting of the sea ice in the Arctic?

The following is a video I have made on the subject 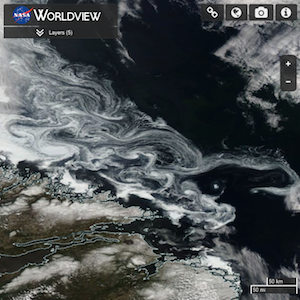 It's official, one of the largest icebergs ever recorded just broke off from Antarctica. This extraordinary ice calving event happened in spite of it being the middle of winter at the South Pole. It happened in spite of the all out climate engineering chemical ice nucleation assault being carried out on both polar regions.


Due to extreme intimidation by the current administration and its fossil fuel industry / military industrial complex appointees (previous administrations as well), the science community is generally afraid and thus unwilling to speak candidly about the Larsen C collapse (or climate engineering), its causes, and its ramifications.


Chemical ice nucleation processes must be seen to be believed. The vast majority have no idea how powerful chemical ice nucleating / endothermic reacting materials are. The vast majority have no idea that such chemicals are being utilized by the global climate engineering cabal on a massive scale. The use of such patented processes is not just for engineering winter storms on a rapidly warming world, but the same chemical elements are being used to artificially / chemically nucleate ice on sea surfaces. Power structure funded disinformation individuals and sources, of course, never mention chemical ice nucleation (and its use by the geoengineers) while putting out completely false information about "global cooling" or "global warming is a hoax".  Such false narratives are extremely harmful to the critical cause of exposing and halting climate engineering. Such false narratives are also exactly what the power structure and the climate engineers want. The climate science community also toes the line for the power structure and the geoengineers by never mentioning the ongoing climate engineering insanity in any way. To do otherwise is a very bad career decision, or worse. The illegal federal gag order on all National Weather Service (NWS) and all all National Oceanic and Atmospheric Administration (NOAA) employees (courtesy of the Obama administration) is further proof of this fact. Sea surface chemical ice nucleation creates extremely anomalous patterns that resemble a chemical spill dispersion (because that is exactly what these patterns are). The recent NASA satellite images below (taken in the polar regions) provide shocking proof of these sea surface patterns. 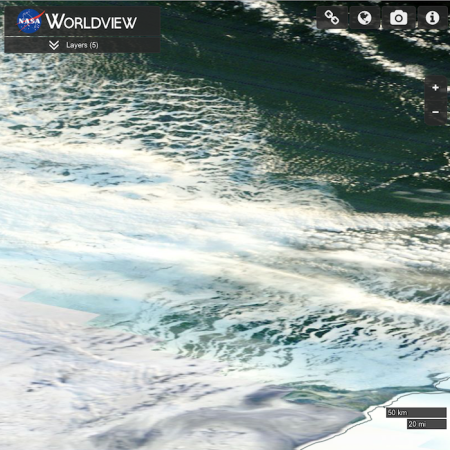 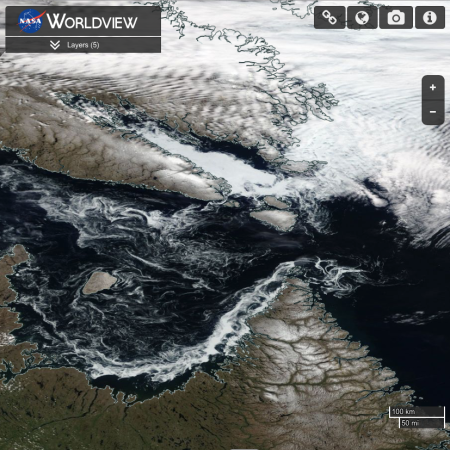 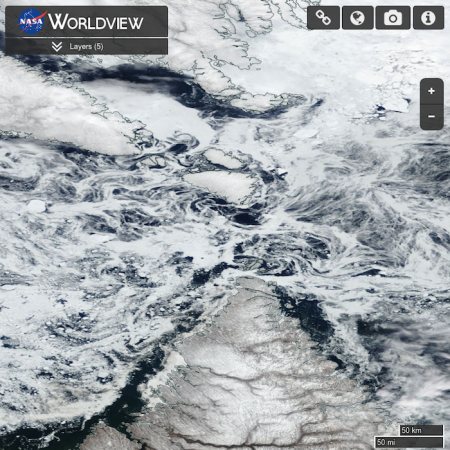 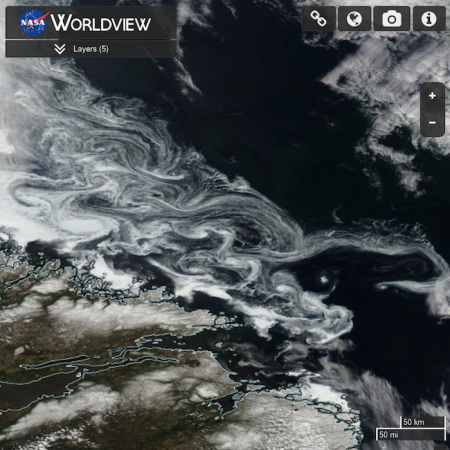 South of Greenland, 2017
Historically unprecedented completely uniform "ice balls" are now often showing up along the shores of water bodies where ice nucleating materials are being dispersed. 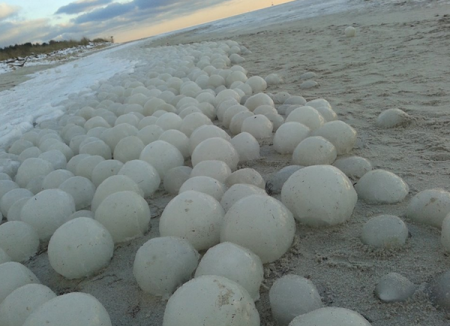 "Ice balls" on the Baltic Coast in Northern Poland. "Official" sources say this recent unprecedented phenomenon is just "natural", are we to believe them? 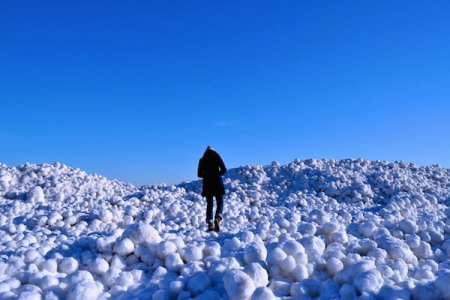 "Ice balls" have formed and accumulated on Lake Michigan in the last few years, why? Such "ice balls" have even formed on lake water that was 40 degrees, how is this possible at temperatures far above the normal freezing point? Without chemical ice nucleation, it isn't possible. 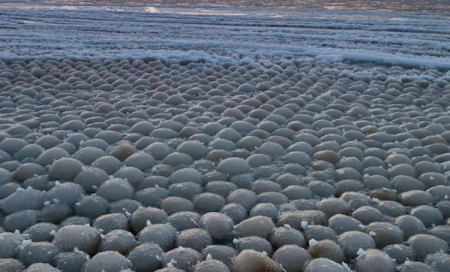 Ice balls on the coast of Finland. The "official" explanation for this recent mysterious anomaly? Again, we are told this historically unprecedented phenomenon is just a "natural" occurrence.


For decades, the climate engineers have been able to mask the true degree of planetary meltdown with various processes like chemical ice nucleation (the Chinese government openly admitted their use of chemical ice nucleation for weather modification). But we must consider at what cost has this grand deception come? Geoengineering has created short term toxic cool-downs at the cost of an even worse overall long term planetary warming. Not only are all climate engineering elements highly toxic, but by chemically nucleating sea surfaces in the polar regions the climate engineers are actually preventing rapidly warming seas from releasing their heat. This in turn is further fueling the thawing of formerly frozen methane seabed deposits. The releasing methane then greatly contributes to feedback loops which, in turn, radically worsen the overall warming of the planet. Over a 10 year time horizon, methane is over 100 times more potent as a greenhouse gas than C02. 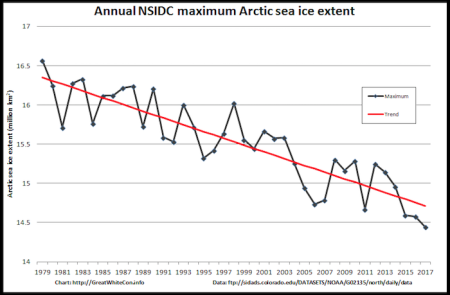 Global sea ice extent (surface area) has continued to decline rapidly in spite of (and in many ways because of) the decades long global climate engineering / chemical ice nucleation programs. "Official sources" have also long since resorted to manipulating data in order to help hide the implosion of Earth's ice deposits (the cryosphere). For example, any sea surface area in the polar regions that has 15% or more of surface slush is "officially" considered to be part of the ice pack. Isn't such an area of sea surface still 85% open ocean? Of course. 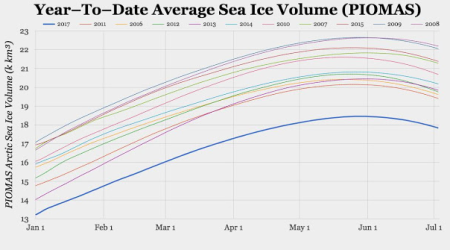 The volume, or mass of the sea ice, is the real bottom line.  Even with the unimaginably extensive sea surface chemical ice nucleation onslaught by the geoengineers, the Arctic sea ice volumes have continued to plummet as shown in the graph above. 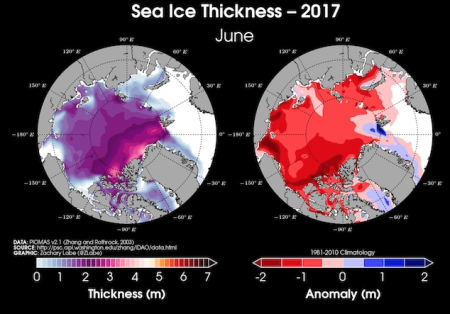 The color-coded ice mass / thickness graphs above are a further illustration of the rapid ice thinning in the Arctic. 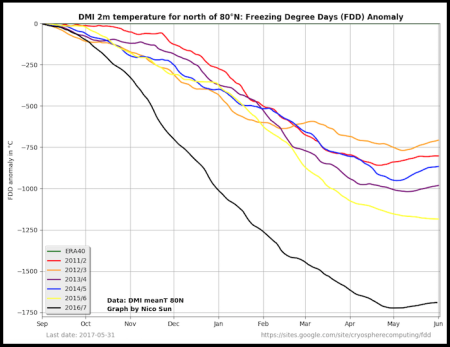 Temperatures in the far north are rising rapidly as is reflected by the increasingly sharp decline of freezing degree days, as shown in the above graph. 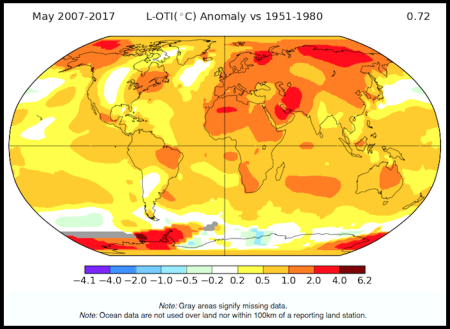 The GISS temperature anomaly map above reflects the changes that are rapidly occurring on our planet. 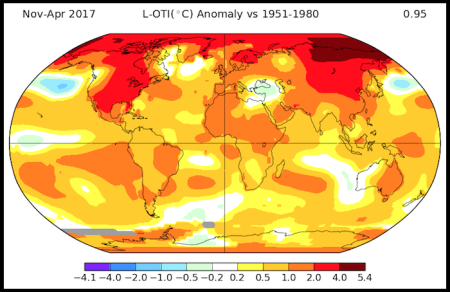 A recent GISS high temperature anomaly map reflects even more accelerated warming, especially in the Arctic.
In addition to utilizing climate engineering / solar radiation management, and chemical ice nucleation, to cover up the true extent of planetary warmimg (while actually worsening the overall warming scenario in the process), various data sources have also been manipulated in the past in order to further mask the unfolding climate meltdown. Recent assessments of all data sources has now made clear that not only was there never any "hiatus" in the rising temperatures, the planetary warming is actually accelerating rapidly.​ All available data indicates that the overall global climate engineering assault has been further ramped up under the Trump administration, especially over the polar regions shown in the surface temperature map below. 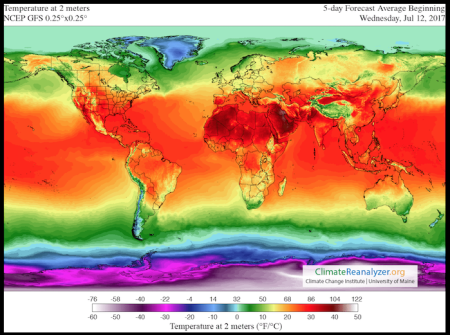 The "Temperature Departure From Average" map below further reveals the areas of concentration for climate engineering orchestrated chemical cool-downs and sea surface chemical ice nucleation (also fueling extreme hail events). The extremely varied temperature extremes are indicative of the "weather whiplash" effect being created by global geoengineering programs. Greenland, Siberia, and Antarctica, should be noted as climate engineering concentration areas due to the grave ramifications posed by the melting ice and / or frozen methane deposits in these regions. But, again, this must be remembered and considered, the climate engineers are further worsening the overall long term warming of the planet in their attempt to mask the warming over the short term. This is in addition to geoengineering programs shredding the ozone layer, totally disrupting the hydrological cycle, and completely contaminating the biosphere. 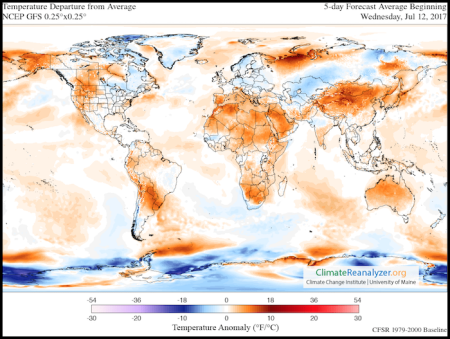 As the state of the climate and biosphere rapidly worsens, the more aggressive disinformation sites and sources will become in the attempt to cover up the threat. Sites and sources that do not post credible and verifiable front line data. Sites and sources that are proficient at putting out pacifying lies that the majority of the population chooses to believe because the unvarnished truth is very difficult (but necessary) to face. Disinformation sites and sources try to claim that there is nothing wrong with the climate (while completely omitting any mention of climate engineering), that the oceans are fine, the environment is fine, and that anyone who says otherwise is just an "alarmist". The disinformation sites often simply cite past predictions from various individuals and sources (that have not yet come to pass) as proof that everything is fine because Wal-Mart is still open and McDonalds is still selling Big Macs. Anyone that chooses to believe such a baseless argument for "everything is fine", is a part of the problem. Denial won't save us, denial won't save the planet on which our lives and our collective reality depends. A truly healthy mind does not run from the truth, rather, it is willing to face it head on, no matter how dire the truth is. On the current course (short of a complete change of direction by our species), our days are numbered. The greatest and most immediate threat we face, short of nuclear cataclysm, is climate engineering (which also must be considered weather and biological warfare). The greatest leap we could collectively make in the right direction at this late hour is to fully expose and halt the ongoing climate engineering insanity. Geoengineeringwatch.org continues to do our best to provide the tools and information necessary to assist activists in their efforts to wake those around them to the geoengineering assault, please, help us to sound he alarm.

The 5 shocking satellite photographs below were taken in the Arctic Ocean on September 15th, 2015.

What these images show is extremely anomalous ice formation in open water, far from any existing remaining ice. 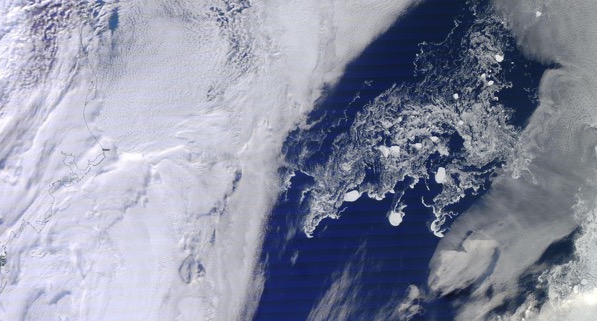 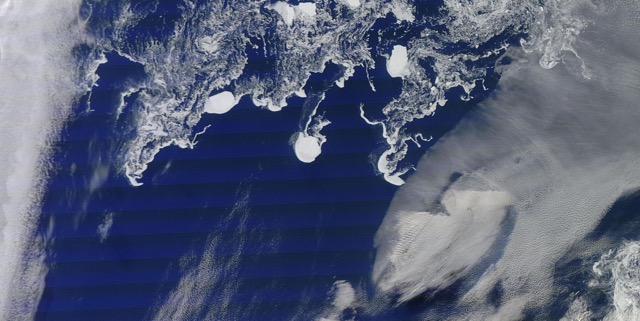 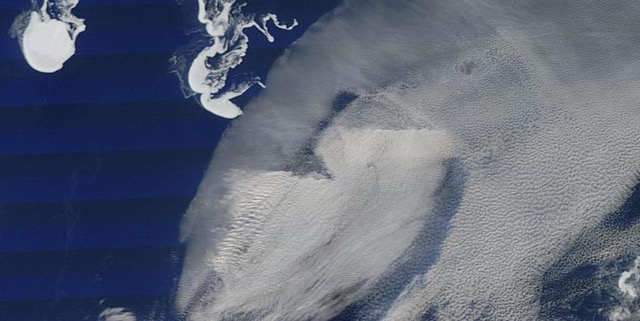 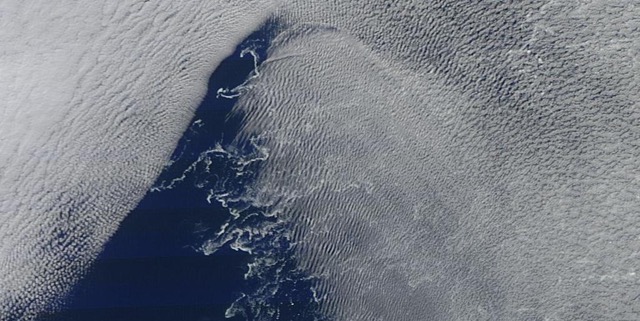 This is the patent involved - 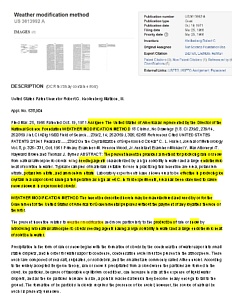 To read this go to; https://www.geoengineeringwatch.org/patents/patent-3613992.pdf

The engineered cool-downs and artificial snow storms are already in full swing in parts of the US even as the sweltering triple digit heat in the Western US continues to break high temperature records. Most of the population as of yet has no idea that the record cool-downs in a record warm world are anything but natural. Even many anti-geoengineering activists still seem unwilling to connect this important part of the puzzle. The patent below is for the purpose of artificial ice nucleation for weather modification. The climate engineers have been at this for a very long time. This patent is from 1966 but similar patents go all the way back to 1950. The more relevant parts of this patent are highlighted in yellow for easier review. This patent should give pause to those that still doubt the magnitude of what is happening in our skies. The "weather makers" do in fact "own the weather", but their ongoing experiments will decimate Earth's life support systems beyond repair if they are allowed to continue.

This is a discussion from a few weeks ago 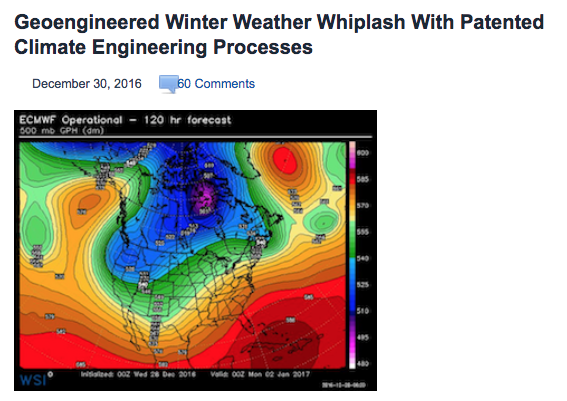 Patented processes for artificially ice nucleating winter storms are owned by our government and have existed for many decades (the Chinese have openly stated they are "engineering snowstorms"). Below are excerpts from only one example of a US government patent that is designed to give those in power the ability to engineer winter weather on a rapidly warming planet.
A demonstration of an endothermic reaction