Warmed, Wet and Blocked: Another Storm Taking Aim at the Flooded Central U.S. is Expected to Transition into a Stalled Nor’Easter

The Ohio River Valley is now reeling from the worst flooding event of the past 20 years. Yet one more major event fueled by disruptions to the Earth’s atmosphere facilitated by human-caused climate change. But with another serious plume of moisture issuing from the warmer than normal waters of the Gulf of Mexico, more heavy rains are heading toward a storm-battered Central U.S.

(One more big moisture plume arises from a warmer than normal Gulf of Mexico. It will help to fuel a major storm system that is expected to impact a large swath of the U.S. for most of this week. Image source: Earth Nullschool.)

This week’s atmospheric moisture pulse will be picked up by a trough sweeping into the Central U.S. over the next couple of days. There, it will help to pump up a series of heavy storms that are predicted to dump another 3-7 inches of rain over the Mississippi River Valley this week. Note that this is on top of the 5-15 inches of rain that has already been dumped over the region during the last two weeks.

(NOAA composite radar imagery shows observed precipitation totals for the U.S. during the past 14 days. Note that another batch of heavy rains is headed directly for the region that has already been hit the hardest.)

Persistent extreme weather patterns of this kind are an aspect of human-forced climate change in that polar warming can result in Jet Stream blocking patterns that cause weather systems to stick around or repeat for long periods of time. This is particularly the case with the storm system now developing in the Central U.S. For as the storm strengthens and moves slowly eastward, it is expected to deepen into a powerful coastal low. This low is predicted to then rake the Northeast U.S. coast with 60 mph winds, heavy rain, high surf and coastal flooding.

As the storm’s eastward passage is blocked by the same weather system that so recently warmed the far north to such extreme winter temperatures, it is expected to linger off the U.S. East Coast even as it intensifies. Due to this predicted stall, the Northeast U.S. is facing the potential of multiple storm tides in which wind-driven water piles up — exacerbating coastal flooding. 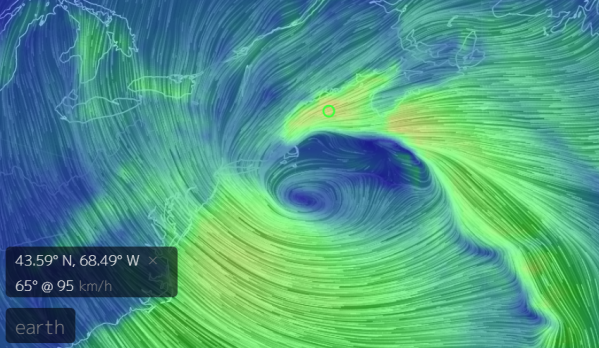 (Very strong northeasterly winds are expected to rake the coasts of Maine and Massachusetts by March 2 according to GFS model forecasts. Image source: Earth Nullschool.)

Though the shape of the present storm is still a bit unclear, it is likely to both further exacerbate already severe flooding over the Central U.S. even as it generates some serious coastal flooding potentials for the Northeast by the end of this week. What is also clear is that a warming polar environment is contributing to these upstream severe weather events by increasing their persistence even as warming ocean surfaces are helping to feed them with larger moisture loads which generates higher potential storm and rainfall intensity.
Posted by seemorerocks at 19:43