The battle for Damascus

This is the propaganda from CNN. 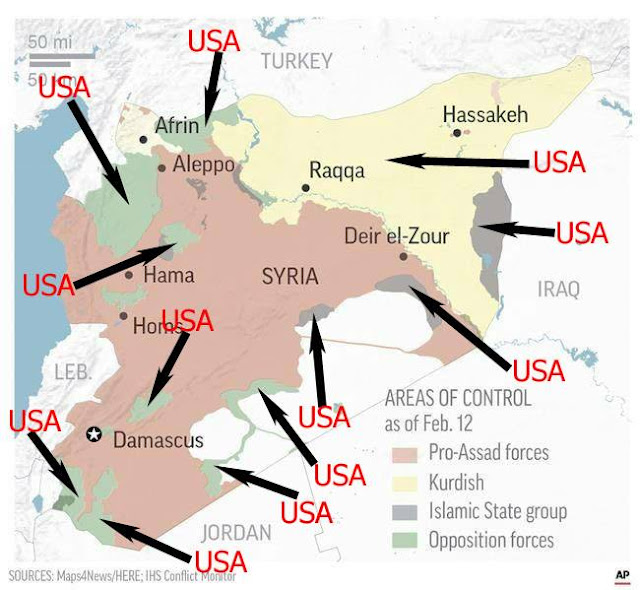 Russian aviation has crushed the militants' defenses in the east of Damascus prior to a major offensive operation of the Syrian Army.
Combat aircraft of the Russian Air Force supported the counter-terrorist operation of the Syrian Army in the uninhabited ruins of East Ghouta, where militants built stronghold fortifications.
The Arab media reported that Russian aviation inflicted point air strikes on numerous terrorist targets east of Damascus, aiming at the tactical positions of the groups and their transport routes. Russian combat aircraft have concentrated on high-precision strikes on militant positions of anti-tank missiles and heavy machine guns.

The operation has been based on a large number of intelligence data collected by observers and agents operating in the militant camp area.
The 500 newly arrived reinforcements from the provinces of Deir ez Zor and Raqqa to the eastern part of Damascus will take part in the upcoming battle to clean up the remaining pockets of militant in East Ghouta.
According to military sources, while the government forces are preparing for the offensive, another 500 soldiers were redeployed in the vicinity of Damascus.
With the newly arrived forces, the total strength of the offensive military force deployed by the Syrian government forces increased to more than 10,000 - among them the famous "Tigers" of General Suheil al-Hasan.

Whose Hospitals Are Overflowing With Blood? Stop Lying About Syria!

Thirteen martyrs, and over seventy seven wounded, was the result of yesterday’s terrorist attacks on Damascus.  Over 200 mortar shells were launched from Eastern Ghouta in Damascus countryside on the suburbs and neighborhoods of Damascus – and that was only yesterday. The situation of sustained attacks of this nature has been much the same for many years, ever since Takfiri terrorists took Eastern Ghouta under control.

Over 30,000 terrorists are located in this area which is one of the most dangerous terrorist strongholds in Syria, along with Idlib. Eastern Ghouta’s terrorist enclave presents an even graver danger than those in Idlib due to its proximity to the capital. This has been made all the more worrying as Damascus has always been the penultimate target of the original enemies of Syria, the western alliance and “Israel”.

Al-Ghouta is now home to factions of radical Islamists whose slogan is: ‘we are coming to slaughter you’. Moreover, the situation is becoming increasingly unbearable , with daily missile strikes on Damascus. The terrorists of al-Ghoutha have escalated their attacks ever since the New Year’s Eve, 2018. Every day Syria loses more martyrs to these attacks, most of whom are children, teachers and ordinary workers. To make matters even more horrific, the terrorists purposefully target schools, hospitals and public parks.

The pain theses terrorists cause to our people everyday, could simply not be the product of a Syrian mind, it could only be a Zionist mind that could conceive of such a systematic plot to kill Syrians and destroy their lives. Syrians realise that a covert “Israeli” hand is behind the attacks on Damascus, a city that is not only Syria’s capital, but whose location is perilously close to the border of the occupier entity. Indeed, some of “Israel’s” covert actions are unmasked as blatant when “Israeli” missiles are fired at Damascus in tandem with Islamist missiles from al-Ghoutha.

How many families in Damascus must lose their children while they were at school, just because the al-Ghouta terrorists have the technical ability to launch their missiles at those school, whenever they want and all under shameful silence of the UN? How many young Syrian girls must lose their legs or eyes in terrorist shelling on the city? Can you imagine such a missile landing on your bed or in your kitchen? What have the teachers and children and workers done to deserve such daily horrors?

Finally our Syrian Arab Army has to stop these terrorists – these armed terrorists who have every kind of advanced weapon, medicines and equipment that most regular Syrians no longer have. Sometimes these weapons were smuggled to them via the soft Turkish border and at other times via “Israel”.

Only two days ago, our army made its way to this stronghold of terrorists in order to stop their attacks on the poor civilians in Damascus.  But in spite of this, the terrorists continue their attacks as they have mass storehouses of advanced weapons. But now the deaf and dumb ‘international community’ represented by the UN has opened its blind eye, but only defend the terrorists of al-Ghouta before demanding an untenable ceasefire.

All the while, the Godfather of the terrorists, “Israel” has used its media machine to defend the terrorists saying President Assad decided to end the “rebellion” in al-Ghouta. “Israeli” media has claimed that these terrorists are “rebels” who are ‘innocently’ bombing our children because those children are in so-called “pro-regime” schools. It’s no wonder, as “Israel” continues to pursue its age old dream of creating a buffer zone in southern Syria controlled by the al-Nusra front terrorist group.

At the same time, western mainstream media rely on the White Helmets, a group aligned with the al-Nusra jihadists of al-Ghoutha telling lies that it is their hospitals which are flowing with blood. These are the same people who staged and propagated the discredtied “chemical attack” in al-Ghouta in 2013. Indeed, “Israeli” media always simultaneously publishes the same fake stories coming  from the pro-jihad White Helmets.

As a Syrian, we in Syria recognize that every missile against our children, every attack against our homeland is an “Israeli one”, whether by “Israeli” planes and missiles or by terrorist groups covertly working with “Israel” in order to pursue “Israel’s” longtime goal of destroying Syria, irrespective of whether such groups call themselves al-Qaeda, al-Nusra, ISIS etc – all the while US coalition airstrikes kill our soldiers and civilians in Deir ez-Zor and Raqqa just as they killed Iraqis in Mosul. This is the reality for a people besieged on all sides.


VIDEO: A Breakdown of the Coming Battle for East Ghouta

The Battle for East Ghouta will be a defining one for this seven year-long war in Syria. It will be a long painful affair, but we can expect western mainstream news outlets like CNN, The Guardian, NBC, Washington Post and New York Times to be cheering for al Qaeda terrorists embedded there.

Presenter Kevork Almassian form Syriana Analysis explains the battle for East Ghouta, shedding light on the history of the war in the area and the imminent battle that is coming in the upcoming days. Watch:

Posted by seemorerocks at 18:44

Email ThisBlogThis!Share to TwitterShare to FacebookShare to Pinterest
Labels: Syra