This has yet to be confirmed but is huge if true

House Passes Bill To "Microchip Citizens With 'Mental Disabilities'" - Who's Next? 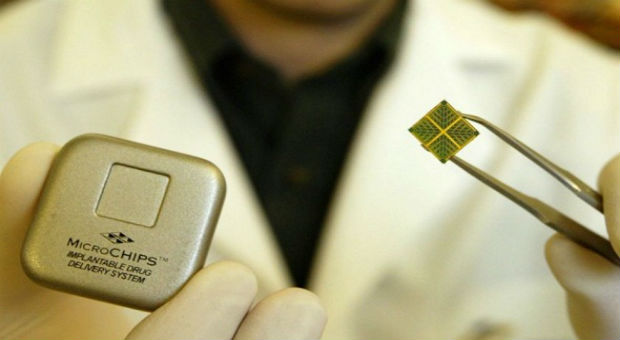 We’ve all been warned that it is coming, but as SHTFPlan.com's Mac Slavo notes, what is disturbing is that while technology surrounds us and *some* have concerns about privacy, most shrug at the massive amounts of data they are collecting about our lives, and the incredible level of control the system now has over each individual.


This bill passed, clinging to the broadest base of “good intentions” that it could muster, i.e. caring for those with disabilities and decline with age.

But in reality, it is a nose under the tent for a system that needs the ability to microchip dissenters, and to force cooperation on the part of the general population. In effect, everyone is now under their thumb with this, because anyone could doesn’t go along with the mass conditioning will be labeled ‘mentally –––’ and branded with a track-and-control chip. Game over.

At the first sign of suspicious behavior, or troubling social media profile, or a misunderstanding during an encounter, police and medical personnel – among others – will have the authority to declare someone ‘mentally disabled’ (or incapacitated, or temporarily insane, or unsound of mind, or whatever label is handy) just because they express discontent, anger or outage at the state of the world and political affairs. “Fake news” journalists can be shut down, and “conspiracy minded” individuals controlled… and of course, it will be abused. The tactics used against parents by CPS will be forged together with the creepy total surveillance of the fusion centers, etc.


This power will expand, and try again if it is slowed down or rejected.Whether it takes the form of an implanted chip, or a tracking number that is tied to each person, they will stop at nothing short of mark in everyone with identity tied to bank accounts, etc. They will insist you be on the grid in every way… and with this bill, they just got one step closer to controlling the future. All this has been foretold, and yet it is beyond anything anyone could have imagined.

Authored by Whitney Webb via TrueActivist.com

Though the bill only targets those with conditions such as Alzheimers and autism, critics say the bill’s passage will open a “pandora’s box” of invasive government surveillance.

Six years ago, NBC Nightly News boldly predicted that all Americans would be fitted with RFID microchips by the year 2017. Though at the time, NBC’s prediction seemed far-fetched, the House recently passed a bill that would bring a micro-chipped populace closer to reality before year’s end. Last Thursday, the House passed HR 4919, also known as Kevin and Avonte’s Law, which would allow the US attorney general to award grants to law enforcement for the creation and operation of “locative tracking technology programs.”

Though the program’s mission is to find “individuals with forms of dementia or children with developmental disabilities who have wandered from safe environments,” it provides no restriction on the tracking programs inclusion of other individuals. The bill would also require the attorney general to work with the secretary of health and human services and unnamed health organizations to establish the “best practices” for the use of tracking devices.

Those in support of the legislation maintain that such programs could prevent tragedies where those with mental or cognitive disabilities wandered into dangerous circumstances. Yet, others have called these good intentions a “Trojan horse” for the expansion of a North American police state as the bill’s language could be very broadly interpreted.

“While this initiative may have noble intentions, ‘small and temporary’ programs in the name of safety and security often evolve into permanent and enlarged bureaucracies that infringe on the American people’s freedoms. That is exactly what we have here. A safety problem exists for people with Alzheimer’s, autism and other mental health issues, so the fix, we are told, is to have the Department of Justice, start a tracking program so we can use some device or method to track these individuals 24/7,” Representative Louie Gohmert (R-TX) said in a floor speech opposing the bill.

Gohmert’s assessment is spot-on. Giving local police the authority to decide who is micro-chipped and who is not based on their mental soundness is a recipe for disaster. Though the bill specifically mentions those with Alzheimer and autism, how long before these tracking programs are extended to those with ADHD and Bipolar disorder among other officially recognized disorders. Even the dislike of authority is considered a mental disorder known as “Oppositional Defiant Disorder,” which could also warrant micro-chipping in the future.

If these programs expand unchecked, how long will it be before all Americans are told that mass microchipping is necessary so that law enforcement and the government can better “protect” them? Many Americans have been content to trade their liberties for increased “security” in the post-9/11 world, particularly when the state uses these talking points. Yet, as Benjamin Franklin once said, “those who surrender freedom for security will not have, nor do they deserve, either one.”

Posted by seemorerocks at 11:32