‘I’m no Putin fan, but one must accept facts’: Veteran journo walks out of Al-Jazeera panel (VIDEO) 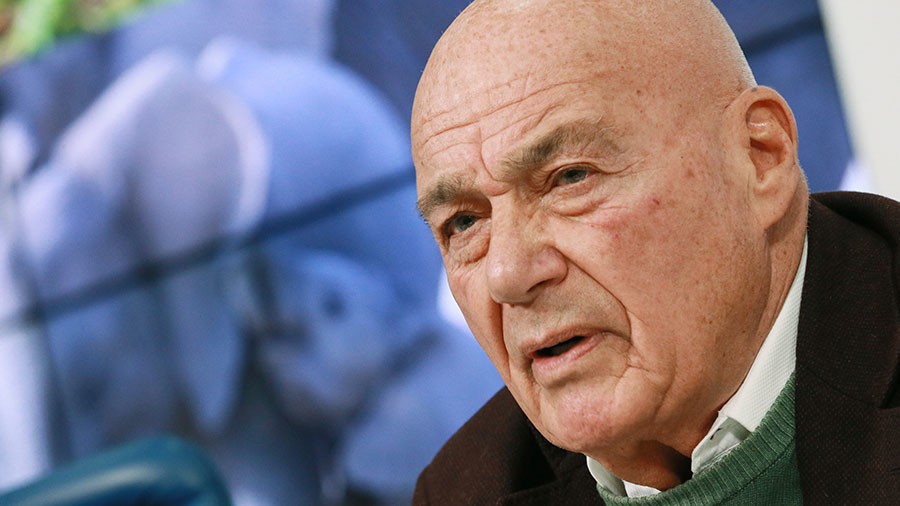 
Vladimir Pozner, one of Russia’s most-respected journalists, walked out of an Al Jazeera panel on the upcoming Russian election after it became clear that it would only be “an ideological debate” void of real analysis.

The Friday installment of Mehdi Hasan’s UpFront program on Al Jazeera English was devoted to Russia’s alleged interference in the 2016 US election and the upcoming election in Russia, which incumbent President Vladimir Putin is predicted to win, according to polls. 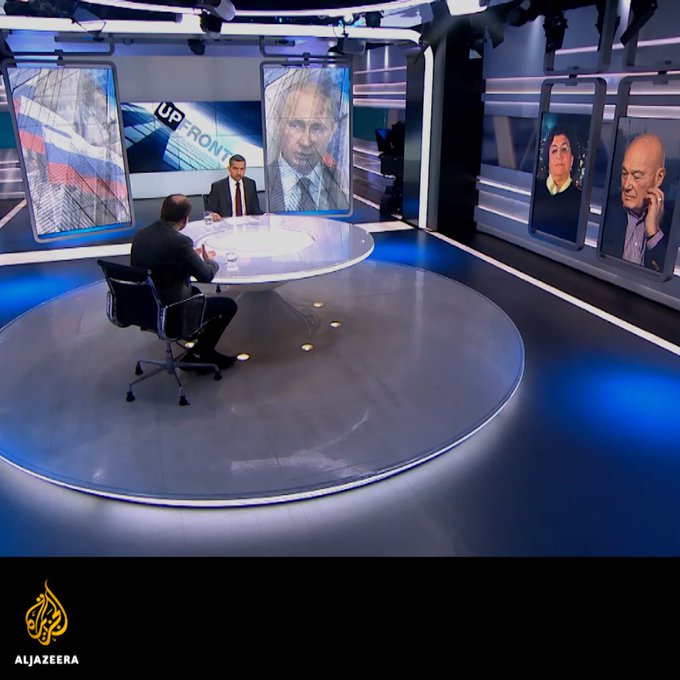 UpFront ✔@AJUpFront
Russians vote for their next president in March. Will Putin win his fourth term? In the Arena to debate: @albats, @vkaramurza and Vladimir Pozner.


The second part featured a 15-minute panel of experts, including Pozner, fellow journalist Evgenia Albats, and political activist Vladimir Kara-Murza. Albats and Kara-Murza, both outspoken opposition figures in Russia, took turns dismissing the upcoming vote as “not a real election,” after which came Pozner’s turn to speak, which he used to graciously bow out.

“When I was asked to participate in this program, I said I was not interested in getting into a debate. I am not a debater, I am a journalist. I am not opposition… I am not a big fan of Putin’s, but I like to try to be objective,” he said.

“People do go to the poll and they do vote. And for whatever reasons, Putin has a very high percentage of support. And it’s not because people are stupid. I say again, I am not a Putin supporter, but either you have to see things the way they are or you describe them the way you want them to be or want people to believe them to be,” Pozner said.

“What I am going to do is to let the two people talk and agree with each other on all the negative things they are going to say and I will do some other stuff that is much more interesting for me,” he added, explaining that he did not care to participate in “an ideological debate.”

As Pozner was leaving, Kara-Murza implied that he was a secret Putin supporter who was running away from honest debate, while Albats remarked that Russia’s Channel One, which she called part of a state propaganda machine, has an interview program hosted by Pozner. The discussion then drifted on to the perils of being an opposition figure in Russia and whether or not Putin will step down after his next term ends.

Explaining the move later on his webpage, Pozner said he was misled into thinking the program would be an honest attempt to show foreign viewers the complex situation with elections in Russia. He said the program was initially supposed to give airtime to other experts in addition to Pozner, and that he expressed concerns about the format after learning about the substitutions.

“I stressed that I would not take part in political debates, first, because I do not seek to argue with either Evgenia Albats or Vladimir Kara-Murza, and second, because the [Al Jazeera] audience knows absolutely nothing about Russia and will not understand anything, ultimately deciding that whoever speaks ‘smoother’ must be right. I was assured there would be no debate,” he said.

The Russian presidential election is scheduled for March 18. The term of office is six years and no president can have more than two terms in a row, which means that if Putin wins, he will not be able to seek re-election in 2024.


From the comments section in Off-Guardian

I am from Russia. Checked a full video and would like to say a coule words.

Well, well – wow, what people we have on Aljazeera! Vladimir Kara-Murza and Yevgenia Albats. You MUST know who these people are to fully assess/understand WHAT they say and WHY they say it. Both of them are a part of the so-called “liberal opposition” in Russia and, as the saying is, non-handshakable in respectable society.
First note – it was very funny to hear “regrets” and “claims” about “propaganda” in Russia, and to hear it on ALJAZEERA(!). I think there’s no need to tell/explain WHO is Aljazeera & whom they serve. It’s the same if, for example, ISIL will complain about the terrorist attacks committed by other factions. Haha, very funny.
Second note – as i already said, you HAVE/MUST know who Vladimir Kara-Murza and Yevgenia Albats are to paint a right picture of the whole thing in you mind. Both of them are sharply anti-Russian. Or, better say, they are “against Russia in its current form” – i.e. with Vladimir Putin as a president.
And in fact they work to undermine the state (Russia).
Yevgenia Albats pretend she’s a “independent journalist” (or TV presenter called her this way?). I must note that she had a program on infamous russian radio “Echo of Moscow”. This radio station pours tons of mud and slop on the state, on the official Russian authorities and on the Russian nation on the whole. When there’re terrorist attacks in Russia – they are happy(!). When Russian soldiers/generals killed in Syria – they are happy. When every year on 9 may (day of Great Victory over nazism in 1941-1945 war) millions of Russian people march as one in “Immortal Regiment”, this way showing solidarity, the memory of the dead ancestors – a scum from “Echo of Moscow” twitch in convulsions from hatred and rejection because of this manifestation of the unity of the nation. Plus they yell that “Russia has nothing to do in Syria”, that “Russia is aggressor” and “annexed Crimea”, and so on and so on. I.e. a typical & very much pro-Western points of view, very much anti-Russian points of view. That’s why the overwhelming majority of Russian society perceive them as marginals, renegades, and, in fact, “enemies of the nation” (yep, seem to be a long-forgotten definition from Soviet times, but which is becoming relevant in our days again).


I think, for example, in the US the activity of such a radio station would be clearly regarded as anti-state activity (with all the ensuing consequences). But the most funny and ridiculous thing is that “Echo of Moscow” radio station is sponsored by… Gazprom company – a Russian gas giant, a national STATE company, i.e. it is sponsored by state. This fact has long caused many questions from the Russian public – why does the state sponsor this kind of radio station that pours tons of dirt on the country? No answer yet..


Vladimir Kara-Murza is an even more interesting character. Funny, but just today it was pretty interesting TV programm about this person. It would take a large space to write about this scum properly. If briefly, then: very much anti-Russian (or, the same – “against Russia in its current form” – i.e. with Putin as a president); in fact he works for the West; he is sponsored by the West; he is Putin’s hater; he is a vivid representative of what is called the “fifth column” in Russia…
Vladimir Kara-Murza is a citizen of Great Britain, but he lives in the US.

Kara-Murza is a wellcome guest on such radio stations as “Voice of America” or “Radio Liberty” (from this it is already possible to draw certain conclusions…).
In early February 2018 the City Council of Washington unanimously approved the new name of the square in front of the Russian Embassy in the US – now it’s “Boris Nemtsov” square – in many respects it was promoted by Vladimir Kara-Murza…
It is VERY characteristic that Aljazeera (remember a propaganda-factor) invited THIS KIND of “experts” to talk about upcoming elections in Russia. THIS KIND of people have a clear task – to form a “public opinion” that upcoming president elections in Russia will be “illegal”, “not democratic”, “dirty”, “fake” (allegedly lack of competition) etc.
As i already said, both Yevgenia Albats and Vladimir Kara-Murza are working to undermine Russia.
I will not talk in detail now about Aleksey Navalny, whom Kara-Murza called one of the few who is a “real rival of Putin”. This is nothing more than a farce and a lie, a clear wishful thinking. Navalny is a clown and a criminal. No one in Russia takes him seriously – neither society, nor authorities, nor political scientists / real experts etc. Btw, a fact that Russian authorities are too kind & ultra-liberal with this clown confirmed by the fact that Aleksey Navalny has three(!) conditional discharges, and according to Russian legislation, he should have been imprisoned for a long time already! But he’s still(!) free. And it’s a good long-standing question for the Russian society – WHY he’s still free, WHO save him and for what purpose…

Navalny has NO support from Russian society. For Navalny it’s a problem to gather a few thousand people in Moscow for his rallies/”protests”, considering a fact that there are over 12 million people in Moscow. Anyone who saw (on youtube, for example) Navalny’s rallies/”protests” clearly noted that the overwhelming majority of “protesters” are children and teenagers. The reason is simple – serious, clever and adult people are NOT interested in farce he’s doing.
To pretend that Aleksey Navalny is a “real rival of Putin” is the same as to pretend that, for example, there’s “moderate opposition” in Syria (yep, jihadists who kill civilians & whom MSM call “rebels” that must be “saved”). Total farce and deliberate misrepresentation of facts.
So i’m not surprised Kara-Murza pretend that Aleksey Navalny is a “victim” allegedly suffered by the “brutality of the Russian authorities”. This narrative has NOTHING to do with reality, but it’s what Kara-Murza (as well as Yevgenia Albats, and other similar persons) must say, cuz his sponsors expect it to be said.
Posted by seemorerocks at 17:57