Ads are appearing on CraigsList for Crisis Actors in Slidell (New Orleans) Louisiana, and some people are wondering if this part of the country will be the next FALSE FLAG / PHONY MASS SHOOTING on Wednesday, February 28?

The ad, shown below offers to pay $1,000 to nine people who will be given a script on what to do/say or how to act. 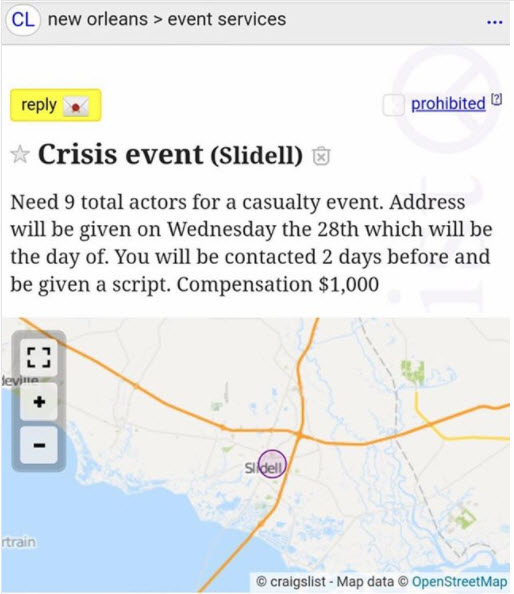 These types of ads routinely pop-up on CraigsList in the days and weeks BEFORE a "Mass Shooting" - thus giving rise to many people realizing that some of the "Mass Shootings" are nothing more than staged events designed to drive an anti-gun-ownership political agenda.

With the US mass-media being an unadulterated cheerleading squad for leftist/Marxist political efforts, it appears that most of them dutifully comply with these efforts by "reporting" these events as if they're real when a lot of them are staged.

IF THEY ACTUALLY ARE REAL, then the theory being put forth from ads (like the one above) is that these "Actors" are the "survivors" who then make the rounds on media crying for gun control.

The crisis industry spawned by the 2012 NDAA 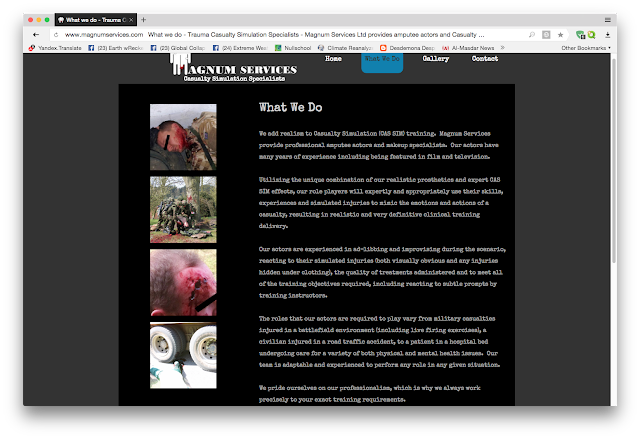 We add realism to Casualty Simulation (CAS SIM) training. Magnum Services provide professional amputee actors and makeup specialists. Our actors have many years of experience including being featured in film and television.

The roles that our actors are required to play vary from military casualties injured in a battlefield environment (including live firing exercises), a civilian injured in a road traffic accident, to a patient in a hospital bed undergoing care for a variety of both physical and mental health issues. Our team is adaptable and experienced to perform any role in any given situation.

We pride ourselves on our professionalism, which is why we always work precisely to your exact training requirements.

These people (Magnum Services) have an amazing Twitter page!