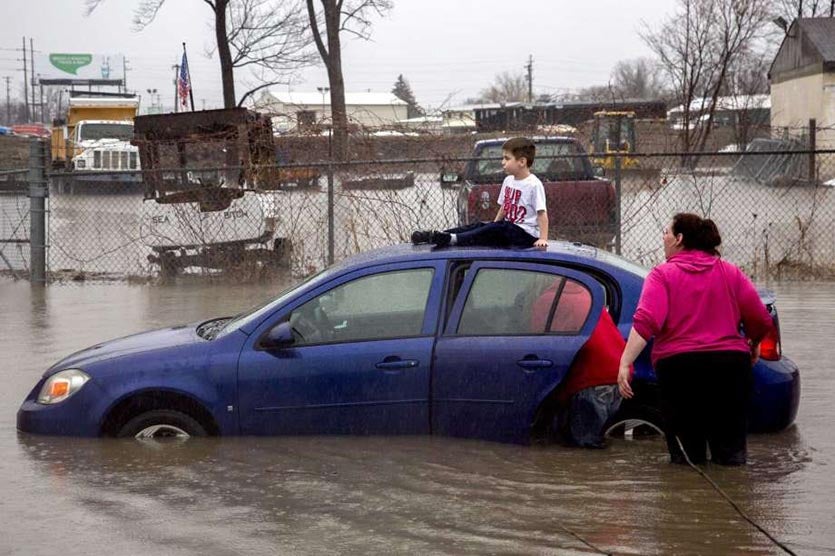 Wunderground,
23 February, 2018
An unusually severe winter flood event is underway across the center of the U.S., from Texas to Michigan, thanks to heavy rains that fell during the week, fed by record to near-record atmospheric moisture for this time of year. The most significant flooding thus far has been in Southwest Michigan, Northwest Indiana, and Northeast Illinois, where the heavy rains fell on a snowpack that completely melted, releasing meltwater equivalent to another ½" – 1” of rain. In East Lansing, Michigan, floodwaters rose on the campus of Michigan State University from the Red Cedar River, causing some classes to be moved on Friday to non-flooded areas. Three drowning deaths have been blamed on the flood thus far, one death each in Michigan, Oklahoma, and Illinois 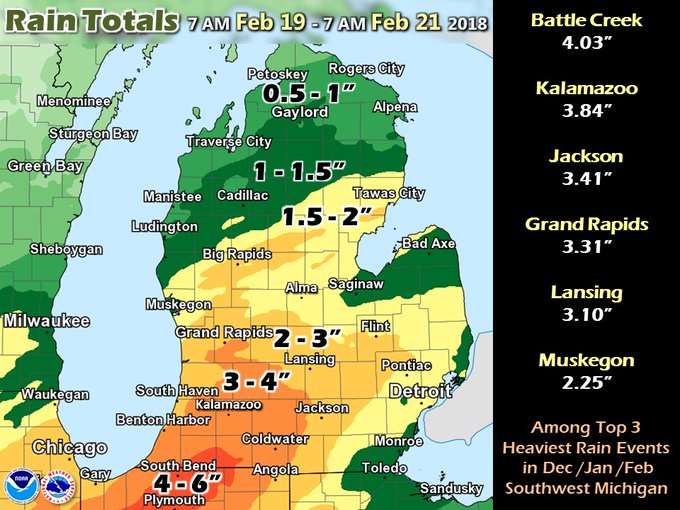 NWS Grand Rapids
✔@NWSGrandRapids
This was one of the greatest winter rainfall events on record in Southern Michigan (rivaling Feb 1997). Forecast river flooding may require actions to mitigate property loss. Every river point has a different history/vulnerability/forecast. http://www.weather.gov/grr/news20180220 … #wmiwx #miwx

Moderate to major flooding expected on the Ohio River

A relatively stationary front over the Ohio Valley will continue to be the focus of periods of heavy rain until late Sunday morning, when the front will finally push to the east. With soils saturated, these additional rains of 2 – 4” will exacerbate the moderate to major flooding already occurring along the Ohio River and its tributaries. Dry conditions on Monday and Tuesday will bring a welcome change to the wet pattern, before another significant rain-making storm moves in on Wednesday. Moderate to major flooding is predicted for the coming week along several hundred miles of the Ohio River, from Pennsylvania to the river’s confluence with the Mississippi River at Cairo, Illinois. The flood waters from the Ohio River will dump into the Lower Mississippi River by late next week; the forecast is for minor to moderate flooding on the Mississippi River by late next week.


An increase in heavy downpours (exceeding the 99th percentile) has been documented across every region of the contiguous U.S. since 1958 (Figure 3), and this increase has been partially attributed to the increase in atmospheric moisture due to human-caused global warming. Every degree Centigrade that the air warms up increases the amount of water vapor the air can hold by 7%, due to increased evaporation from the oceans. Thus, record-breaking atmospheric moisture and the resultant major flooding--like the situation observed over the central U.S. this week--are something we will see a lot more of as the climate continues to warm in coming decades. The average moisture content of the atmosphere has already increased by about 4% since the 1970s, as expected from theory (the Clausius–Clapeyron equation). This increase has been attributed, in part, to human-caused global warming. There is research showing that in the summer, we can expect to see an increase in hourly precipitation extremes (greater than the 99th percentile) of up to 14% per degree Centigrade of warming; at colder temperatures, the increase is about 7% per degree Centigrade of warming, as one would expect from the Clausius–Clapeyron equation. The authors argue that the "super Clausius-Clapeyron scaling" of 14% more hourly rainfall per degree Centigrade of warming in extreme events in summer happens because of the dynamics of convective (thunderstorm) clouds--the extra moisture causes more rainfall formation and more latent heat release when the water vapor condenses into liquid, which forces stronger updrafts, invigorating the thunderstorm, and potentially leading to a stronger rate of condensation and even more rainfall formation.