Arctic temperatures are soaring, and scientists are freaking out

Despite Stronger La Nina, January of 2018 was the Fifth Hottest in the 138 Year Climate Record

Major signals of on an ongoing and inexorable global warming trend continued to be apparent during January of 2018, according to NASA records.

The first month of this year saw global temperatures in the range of 0.78 degrees Celsius above NASA’s 20th Century baseline — or about 1 C warmer than 1880s averages when NASA record-keeping began.

Despite the influence of La Nina — which during 2018 is stronger than a similar 2017 Pacific Ocean cooling event — January was the 5th hottest such month in all of the 138 year global climate record. According to NASA, all of the top five hottest Januaries ever recorded have occurred since 2007, with four of those five occurring during the last five years.

Warm temperature departures for the month were most extreme over the Arctic, over western North America, and through North and Western Europe. This outlier warmth contributed to record low sea ice extent measures in the Arctic and helped to rapidly expand drought conditions across the U.S. In the Southern Hemisphere, Antarctica — recently seeing a series of glacial calving events in the west which hint at a quickening pulse of ice entering the world’s rising oceans — saw an abnormally warm austral summer month. Meanwhile, Australia experienced its own third hottest January even as concerns over renewed mass coral bleaching across the Great Barrier Reef were again on the rise.

During La Nina, movement of warm air and water toward the polar region is enhanced. To this point, global sea ice extent measures are again in record low ranges even after receiving a serious hammering during the winter of 2017. In January, record to near record polar warmth helped to drive a rapid fall in global sea ice extent to today’s record low values in the range of 16 million square kilometers.
Record low sea ice coverage is a climate change amplifier in that it uncovers dark ocean surfaces that capture more of the sun’s rays than white, reflective ice. In addition, open ocean ventilates more heat into the polar atmosphere. Heat that would typically be sequestered beneath the ice. This warming amplification (polar amplification) can also have an impact on the polar circulation of the Jet Stream — causing it to meander more which results in increasing instances of extreme weather (hot, cold, wet, dry, stormy) in the middle latitudes.

(Global sea ice extent is again in record low ranges. This is a primary signal of a warming polar environment — which can have far-ranging harmful impacts. Image source: Global Sea Ice and NSIDC.)

Over the coming months, we should expect some continued stress to both Arctic and Antarctic sea ice — with the caveat being that cloudier late springs and early summers have tended to retard warm season ice loss during recent years in the Northern Hemisphere. That said, continued movement into record low ranges for the Arctic hint that rapid advance of melt during winter may eventually translate to summer.
The primary driver of these serious changes to the global environment is continued fossil fuel burning. And with atmospheric CO2 likely to hit between 411 and 412 parts per million this year (with CO2e ranging toward 493 ppm adding in all greenhouse gasses) the amount of warming already being locked in is starting to look quite dangerous in a number respects. That said, damage can still be greatly limited if the world works to rapidly transition toward renewable energy and keeps harmful fuels where they belong — in the ground. 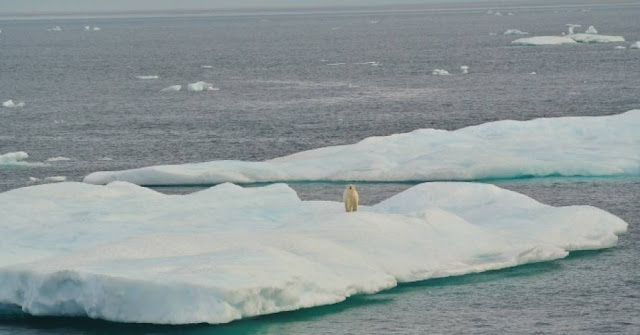 “Sea ice fell to its lowest level since human civilization began more than 12,000 years ago.”

Arctic temperatures are soaring, and scientists are freaking out

The planet keeps heating up and melting ice at a "frightening" pace.
Posted by seemorerocks at 19:26