President Trump signaled on Friday that military action could be in the works if new sanctions against North Korea don’t curb the country’s nuclear ambitions.

The White House on Friday announced aggressive new sanctions against North Korea aimed at crippling their ability to trade.

Speaking at a joint press conference with Australian Prime Minister Malcolm Turnbull at the White House, Trump said that if the sanctions don’t work “we’ll have to go to phase two,” which he said “may be a very rough thing.”

“We'll have to see,” Trump said. “I don't think I'm going to exactly play that card. But we'll have to see. If the sanctions don't work we'll have to go to phase two. Phase two may be a very rough thing. May be very, very unfortunate for the world.”

“But hopefully the sanctions will work,” Trump added. “We have tremendous support all around the world for what they're doing. It really is a rogue nation. If they can make a deal it will be a great thing. If we can't, something will have to happen. So we'll see.” 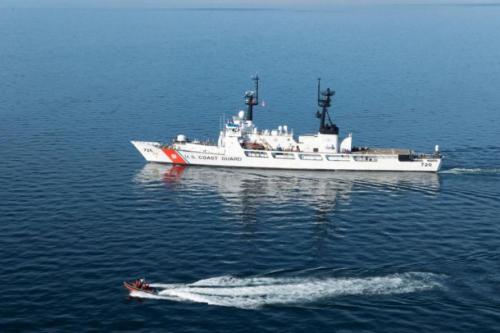 The Trump administration is coordinating with key Asian allies to crack down on ships suspected of violating sanctions imposed on North Korea, Reuters reports.

The joint effort between the U.S. Coast Guard and regional partners including Japan, South Korea, Australia and Singapore, would go further than ever before to physically block deliveries of banned weapons, components for its nuclear missile program and other prohibited cargo. Suspected violators could be targeted on the high seas or in the territorial waters of countries which cooperate with the coalition. Up to now, suspect ships have been intercepted on a far more limited basis.

Depending on the scale of the campaign, the U.S. might even devote a portion of air and naval power from the Pacific Command - though the plan would stop short of a full naval blockade according to officials who spoke on condition of anonymity.

While suspect ships have been intercepted before, the emerging strategy would expand the scope of such operations but stop short of imposing a naval blockade on North Korea. Pyongyang has warned it would consider a blockade an act of war. -Reuters

North Korea is suspected of being just a few months away from having an ICBM capable of hitting the U.S. mainland, a program which has continued despite heavy sanctions which have been sidestepped by smuggling and ship-to-ship transfers of banned goods.

“There is no doubt we all have to do more, short of direct military action, to show (North Korean leader) Kim Jong Un we mean business,” said a senior administration official.

Dozens of countries and vessels linked to North Korean shipping trade were slapped with fresh sanctions by Washington Friday, while the U.S. urged the United Nations to blacklist entities known or believed to be smuggling prohibited cargo in or out of North Korea.

"Those who trade with North Korea do so at their own peril," added Mnuchin.

"The United States will leverage our economic strength to enforce President Trump’s directive that any company that chooses to help fund North Korea’s nuclear and ballistic missile programs will not be allowed to do business with anyone in the United States."

"While we appreciate the fact that there haven’t been [recent nuclear] tests, that’s not exactly a terrific standard of what we’re applying," Mnuchin said. "Whether they’re Russian ships, whether they’re Chinese ships, we don’t care whose ships they are. If we have intelligence that people are doing things, we will put sanctions on them."


That said, some are concerned that the tougher measures may stoke tensions amid a tense period of diplomacy between nations.

Tighter sanctions plus a more assertive approach at sea could dial up tensions at a time when fragile diplomacy between North and South Korea has gained momentum. It would also stretch U.S. military resources needed elsewhere, possibly incur massive new costs and fuel misgivings among some countries in the region.

Concerns have been raised that more aggressive enforcement of sanctions would trigger a military retaliation by North Korea, and a rebuke by U.N. members opposed to the coalition.

China and Russia, which have blocked U.S. efforts at the United Nations to win approval for use of force in North Korea interdiction operations, are likely to oppose new actions if they see the United States as overstepping. A Chinese official, speaking on condition of anonymity, said such steps should only be taken under United Nations auspices.

Meanwhile, U.S. legal experts are analyzing the best approach to legally initiate the program, citing the most recent U.N. Security Council resolution calling for states to inspect ships on the open seas or in territorial waters. Rules of engagement are also being mapped out to avoid armed confrontation at sea, said officials. Directly boarding ships for inspections has not been ruled out, according to Mnuchin.
"

QUESTION: Can you rule out the United States boarding and inspecting North Korean ships...

U.S. officials, however, have privately said that such actions - especially the use of boarding crews, would be considered with the utmost caution on a case-by-case basis. Others have suggested that the use of less militarily powerful Coast Guard cutters would reduce the chance of military conflict over the use of warships.
[insert: rId12_image2.jpg ]

In December we reported that Russian tankers were reportedly caught selling oil to North Korea on at least three occasions via transferring cargoes at sea during October and November.

"The vessels are smuggling Russian fuel from Russian Far Eastern ports to North Korea," said the first security source, who spoke on condition of anonymity. -Reuters

The US. Treasury Department sanctioned an additional six North Korean shipping and trading companies and 20 of their ships after the satellite pictures surfaced. In the above picture, the North Korean ship named Ryesonggang 1, was easily identified and connected to the illegal sale of oil from China.
Interdiction in Chinese waters is something likely to be avoided, however - as the U.S. will likely inform Chinese authorities of banned cargo transfers and ask them to perform inspections, one official said.
David Shear, former deputy secretary of defense for Asia for the Obama administration said “It’s probably impossible to stop everything, but you can raise the cost to North Korea.”
Posted by seemorerocks at 12:00