Robert Fisk: "Western howls of outrage over the Ghouta siege ring hollow – we aren't likely to do anything to save civilians"

Syria - The Two East-Ghouta Campaigns - One Is For Liberation, The Other To Save Terrorists

Daily mortar and missile attacks against the Syrian capital Damascus have been ongoing for years but intensified in recent months. The often quoted Syrian Observatory notes:

... raising to 116 persons at least including 18 children and 14 citizen women, who were killed as a result of the fall of these shells since the beginning of escalation on the capital Damascus and its suburbs on the 16th of November, and the SOHR documented the injury of more than 563 persons who were injured in these daily targeting during 3 consecutive months.

All these mortars and missiles were fired from east-Ghouta, a Takfiri held area consisting partly of densely urban blocks and partly of agricultural villages. Some 400,000 people originally lived in the area but the number of people living there now is likely less than half of that. 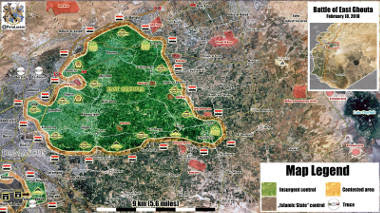 bigger
The area is occupied by Takfiris from three groups. Jaish al-Islam is under control of the Salafi Alloush clan and is financed through Wahhabi "donations" from Saudi Arabia and Kuwait. Al-Qaeda in Syria (aka Nusra Front) and its allied group Faylaq al-Rahman also have significant contingents in east-Ghouta.

In 2015 these terrorists published video which showed their attempts to shoot down a large airliner which had just taken off from was landing at Damascus airport. They drove caged civilians of Alawite belief around town to protect themselves from bombing. The three groups have fought each other again and again and the people in east-Ghouta are the ones who have suffered most from them.

There have been several ceasefire agreements between the government and the terrorist groups but each of them was broken by one or the other group on the terrorist side. Last week another aid convoy by the Syrian Arab Red Crescent entered the area and distributed food and other humanitarian goods. But like elsewhere the militant groups will surely take control of such supplies, hoard them and use them primarily for themselves.

The Syrian government and its allies decided to finally liberate east-Ghouta from the grip of the Takfiri terrorists. Some 25,000 government troops are assembling now and preparatory artillery fire and aerial bombing has begun. The Syrian air force dropped leaflets to point anyone who wants to leave the area to designated humanitarian crossing points.

The western propaganda is repeating its "save Aleppo" campaign to save the terrorists in Ghouta. In the process the western aligned countries are making a joke (vid) out of the UN Security Council. There is no mention in this campaign of any Takfiri and no picture of any of the sectarian militants who daily kill random people in Damascus. This rings hollow writes Robert Fisk.

During the siege and the liberation of east-Aleppo the seven year old Bana, a girl who did not (vid) understand or know any English, was tweeting her genuine feelings in best prosaic English to the world. She called for war against Russia. Her father turned out to be a henchman for al-Qaeda's sharia court in east-Aleppo. But the media just loved that story.

CNN now found itself a new "Bana": The 15-year-old documenting Eastern Ghouta massacre with selfie videos. But this time the lucrative position of a tearful media darling attracted competition:

We spoke with a mother, a former english schoolteacher in #Eastern #Ghouta. Now she teaches her daughter to make video appeals in English - the world has ignored this siege for so long, she said. She hopes people might listen to a desperate child.

There are also Noor and Alaa - a Twitter account which claims to be of two young girls in east-Ghouta who in their videos read out English language propaganda shown to them off camera to "save Ghouta". These two girls seem to be run by the same guy, Mr Alhmado, who organized the Bana scam in east-Aleppo.

During the 2016 Aleppo campaign the terrorist supporters ran an "Aleppo Media Center" which distributed propaganda products to the "western" media. Together with the "White Helmets" al-Qaeda support gang it created the "boy in the ambulance" picture that many "western" newspaper printed on their front pages.

The AMC was financed by the French government. The same organization that ran the AMC is now running the Ghouta Media Center GMC. The English language twitter account of the AMC sent its last tweet on July 5 2017. The first tweet of the new GMC was sent on July 9 2017. Both use a similar logo design:

There are an estimated 15,000 men under arms in east-Ghouta. Despite that, not one armed person can be seen in any of dozens of "White Helmets" propaganda videos of pictures of allegedly rescued, wounded or killed persons in east-Ghouta.

During the east-Aleppo campaign between June 10 2016 and November 19 2016 the "last hospital of Aleppo" was reported as being  destroyed "just now" for at least 21 times (vid). The "last hospital of east-Ghouta" will soon follow a similar path to fame.

The Syrian government has offered to evacuate all militants and their families from east-Ghouta to Idleb governorate. They declined. With the help of Egypt negotiations are ongoing with the Takfiri sponsors in Saudi Arabia. But as there are several terrorist groups involved it is doubtful that much will come from these talks.

The real assault on east-Ghouta has not even started and the "western" governments and media are already waging a full fledged campaign against it.

But neither Syria nor its allies will allow the further existence of this al-Qaeda enclave. Two UN Security Council resolutions, 2249 and 2254, literary "demand" "to eradicate the safe haven [al-Qaeda and ISIS] have established over significant parts of Syria". While others try to protect those terrorists, Syria, Russia and Iran will fulfill this demand.

Obama acolytes call for U.S. attacks on Russian forces to "convince" Putin" that the terrorists in Ghouta must be "saved". But Russia has flown ten additional fighter planes to Syria, including two of its brand new Su-57s (vid), and further upped its air defenses to prevent any surprises from the U.S. or any other side.
While the preliminary shelling is ongoing no starting date and no operational plans for the ground campaign to liberate east-Ghouta have been revealed. Those may depend on the situation on other fronts in Syria, especially the situation in Afrin where Kurdish forces and other Syrian groups are fighting off a Turkish invasion.

A follow-up piece will look into that campaign.

From the dependable Robert Fisk 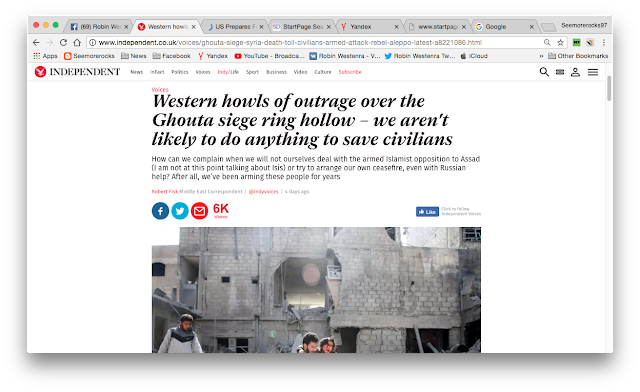 How can we complain when we will not ourselves deal with the armed Islamist opposition to Assad (I am not at this point talking about Isis) or try to arrange our own ceasefire, even with Russian help? After all, we’ve been arming these people for years

The Syrian army arrives in Afrin


WATCH: How many last hospital(s) in Aleppo can be destroyed by Russian airstrikes?

How many “last hospitals in Aleppo” did the media claim were destroyed during the fighting? One? Five? Ten? Watch this video by Tyranny Unmasked to find out…


You're Being Lied To On East Ghouta 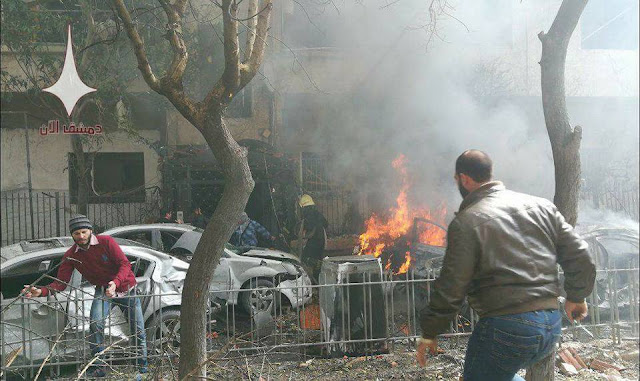 DAMASCUS, Syria - Photos have emerged of the damage caused in a residential neighborhood of Damascus after terrorists from East Ghouta indiscriminately fired rockets.
The rockets hit the Rikn al-Din area of Damascus causing severe damage. 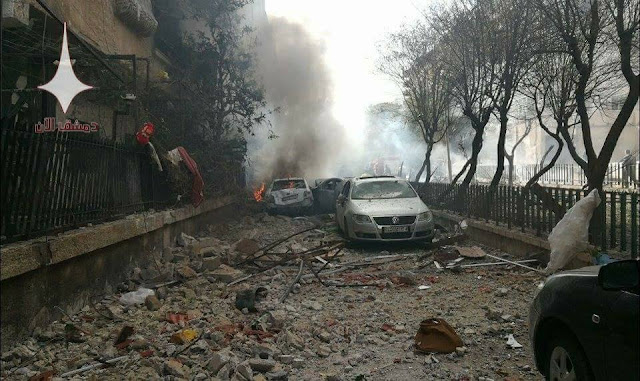 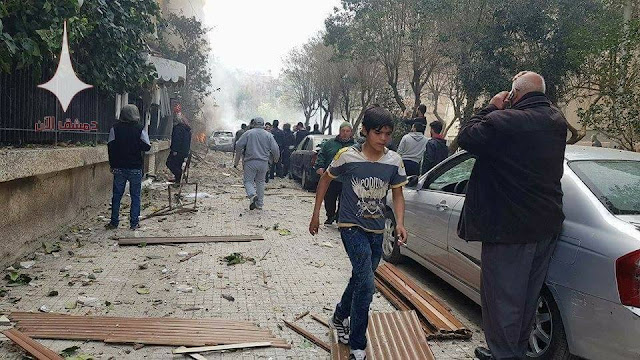 Despite these attacks, the mainstream does not cover attacks done by jihadist forces in East Ghouta and spreads false news made by ISIS-supporters to demonize the Syrian government and make claims that it is targeting civilians.
Three days ago, three children were killed in a school after jihadist from East Ghouta targeted it. See the video of this despicable incident here.
Posted by seemorerocks at 12:08