Officer On Duty Filmed "Doing Nothing" During Florida Shooting

"He Never Went In": Officer On Duty Filmed "Doing Nothing" During Florida Shooting


Video evidence reveals that an armed Broward County resource deputy stationed at Stoneman Douglas High School during the Valentine's day massacre did "nothing" during the shooting - instead waiting outside as a gunman opened fire on students and teachers, killing 17.

Speaking at a press conference, Broward Sheriff Scott Israel said the on duty officer at Stoneman "never went in." Israel said he was "devastated" after watching the video showing the deputy taking a position outside the Western side of Building 12 while shots rang out, "and he never went in" despite having a clear view of the entrance.

"I think he remained outside upwards of four minutes," Israel said.
The uniformed officer, identified as Scot Peterson, was been suspended without pay pending an investigation, according to Broward County Sheriff Scott Israel - however he has since resigned and retired from the department.

"As is his right, Scot Peterson chose to resign, because he has the necessary time with the agency and meets the requirements of retirement, he resigned and retired."

When asked by a reporter what the deputy should have done, the Sheriff replied "Went in. Address the killer. Kill the killer." 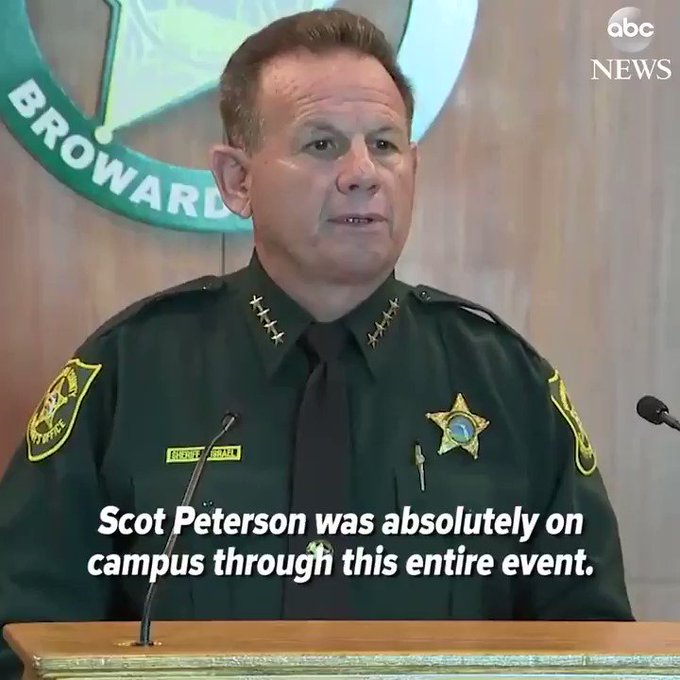 In other words, where previously we learned that on Feb. 5, 2016 Broward Sheriff's were warned by a neighbor's son that Nikolas Cruz "Planned to shoot up the school on Instagram", we now find out that during the shooting, a deputy could have saved lives but he hid instead as teenagers were killed.

The shooting lasted approximately six minutes before the suspected gunman, Nikolas Cruz, dropped his rifle and exited the school - blending in with fleeing students.

The Sheriff also noted that his office was involved in 23 calls regarding suspect Nikolas Cruz and his brother, and has placed BSO Col. Jack Dale and deputies Edward Easton and Guntis Treijis on restrictive duty as investigators look into whether more could have been done to prevent the shooting.

"Some of the calls we responded out and met with his mother," said Israel.
“I’ve restricted two of our deputies as we dig deeper into this, take statements and make a decision to see whether or not they could have done more, should’ve done more,” said Israel.

Last week, the FBI agent in charge of the Florida shooting probe admitted that the Bureau had investigated a school shooting threat made on YouTube last year but could not identify person behind it - despite Nikolas Cruz using his real name to sign the threat.

The man who reported Cruz, Ben Bennight, spoke with the FBI last year for about 20 minutes, and there was no follow-up from the FBI after that initial conversation.

Then, Bennight told CBS that he again spoke with the FBI on Wednesday night for about 20 minutes. They wanted to know if he knew anything more after first reporting the YouTube video last year. He said the same agent/agents he spoke with last year came to his home Wednesday.

And last month, the FBI was warned a second time about Cruz:

“A person close to” Cruz called the agency’s tipline on Jan. 5 and reported the 19-year-old had a “desire to kill people, erratic behavior, and disturbing social media posts” and there was “potential of him conducting a school shooting,” the FBI said in a statement. -NY Post

Furthermore, as we reported earlier today, CNN's FOIA of Broward County 911 records has produced a steady stream of scoops about Parkland, Fla. school shooter Nikolas Cruz fleshing out much of what is publicly known about Cruz's background and the various reports made warning the FBI and other authorities about his threatening behavior.The police were warned about Cruz's violent past - that he'd "used a gun against people before" and had "put the gun to others' heads in the past" - but still they did nothing.
No wonder Sheriff Israel is beside himself - both the FBI, the Broward County Sheriff's office, and the armed school resource officer did absolutely nothing to prevent the deaths of 17 students. And now, back to blaming guns.

Posted by seemorerocks at 20:07