The material I have put together is entirely from Debbie Lusignon, Sane Progressive’s video.
I regard this as so important and interesting that I have done further research to look up some of the links provided by her.


It has been an inordinately frustrating task – I even lost all my work at one stage and I cannot get the formatting right or include all the screenshots without messing things up.
The crisis industry spawned by the 2012 NDAA


This is the propaganda from CNN "debunking" various "conspiracy theories" around the Miami shooting on Valentine's Day.

I must say that every time one of these events happens I have to be taken through the circumstances of each one and have to be persuaded that it was not a genuine event.

In particular, I have been particularly allergic to the idea of the presence of crisis actors along with drills being carried out.

I am deeply indebted to Debbie Lusignon, Sane Progressive for doing the research to prove that this indeed exists and what's more you can go searching on the internet for this. It's all there in the open.

THE NDAA THAT LEGALISES PROPAGANDA AND PSYOPS

The NDAA legalizes the use of propaganda on the US public

The NDAA of 2012 legalised the use of propaganda and psyops against the public of the United States nullify the Smith-Mundt Act of 1948, which explicitly forbids information and psychological operations aimed at influencing U.S. public opinion.

This was passed by both Republicans and Democrats.  Congress went out of their way to make it legal to carry out psychological operations

The question needs to be asked why would they introduce provisions that would be unpopular with the public (if they knew about it) if they are not intending to use them.

In the wake of passing this law a whole crisis industry sprang up.

Debbie goes through various examples of such companies. This is NOT conspiracy theory. You can go onto the Net and see these companies for yourselves and check the services they offer.

There are numerous companies , providing services such as

Let's have a look at some of the material Debbie found

Crowds On Demand was founded by Adam Swart who was, amongst other things was political organiser for Jerry Brown’s political campaign. 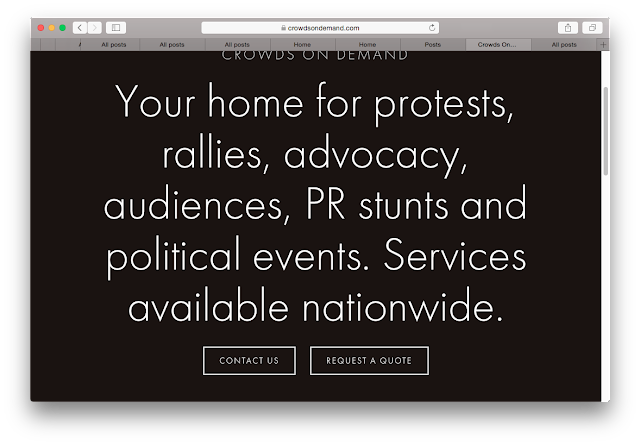 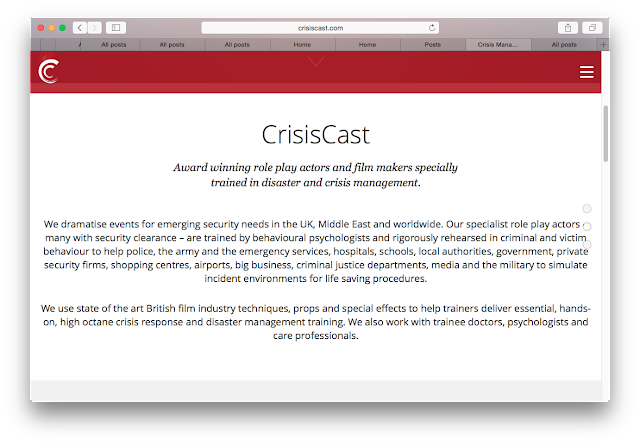 CrisisCast is a company based in the UK. Here is a description from its website. 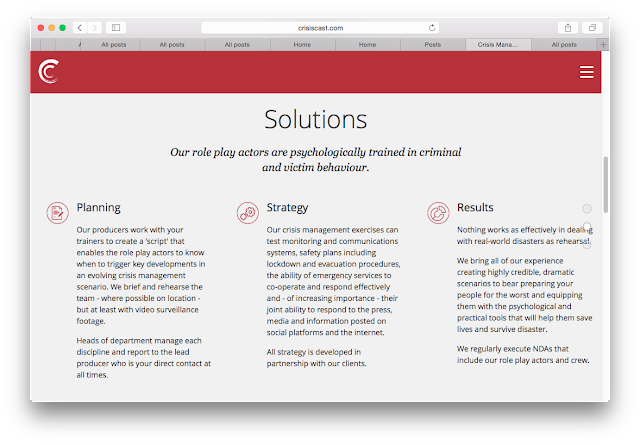 Our crisis management exercises can test monitoring and communications systems, safety plans including lockdown and evacuation procedures, the ability of emergency services to co-operate and respond effectively and - of increasing importance - their joint ability to respond to the press, media and information posted on social platforms and the internet.

All strategy is developed in partnership with our clients.

Whether your organization is lobbying to gain approval of a project, move forward a legislative initiative, bring additional pressure within complex litigation or trying to see swift and effective action in another way, we can set-up protests, coordinate phone-banking initiatives and create non-profit organizations to advance your agenda.

The crisis actor company is associated with an aerospace and space contractor company that is holding the Security and Policing Conference 2018 to take part in a closed-security facility and is holding meetings with all the senior government policy makers. 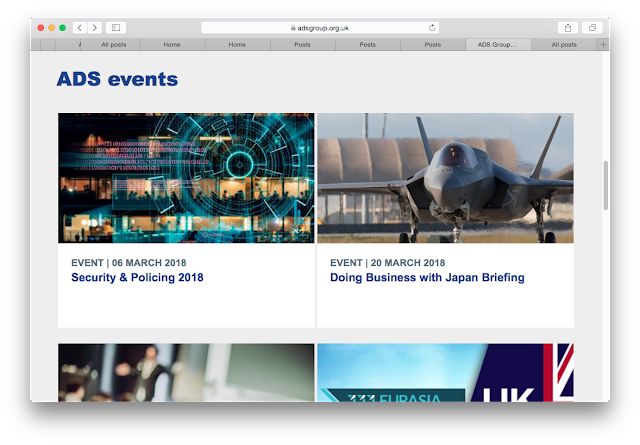 ADS is the Premier Trade Organisation for companies in the UK Aerospace, Defence, Security and Space Sectors. Membership is made up of over 1000 UK registered businesses.
ADS activities are focused around the following key areas:


The material on the conference has now disappeared from the internet 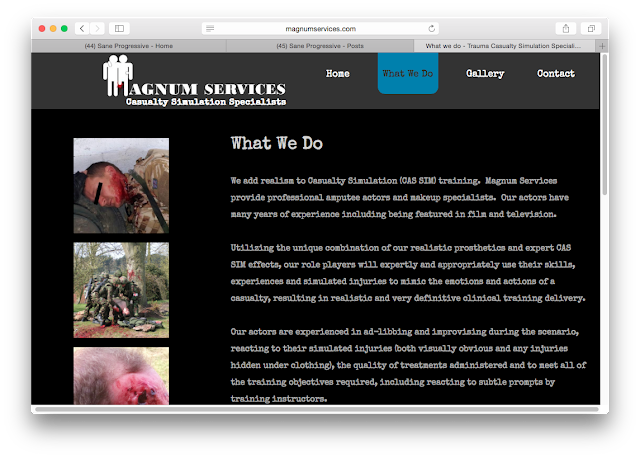 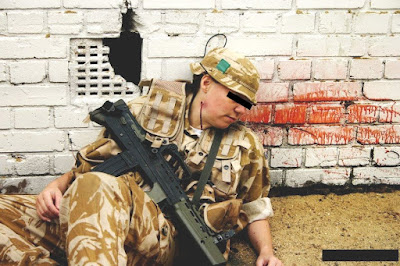 Our capabilities of Casualty Simulation (Cas Sim) effects range from the unobvious and not visible to the physical and traumatic injuries such as: 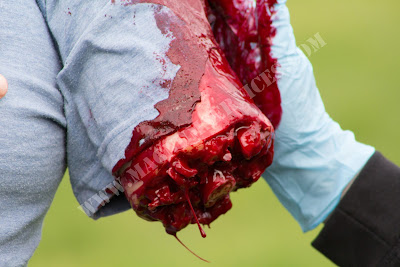 We add realism to Casualty Simulation (CAS SIM) training.  Magnum Services provide professional amputee actors and makeup specialists.  Our actors have many years of experience including being featured in film and television.

The roles that our actors are required to play vary from military casualties injured in a battlefield environment (including live firing exercises), a civilian injured in a road traffic accident, to a patient in a hospital bed undergoing care for a variety of both physical and mental health issues.  Our team is adaptable and experienced to perform any role in any given situation.


We pride ourselves on our professionalism, which is why we always work precisely to your exact training requirements.

Crisis actor companies set up by ex-military people aligned to aerospace and space agencies, participating in closed security conferences to get access to policy and decision makers at the head of the government.

This demonstrates that they are going to carry psychological operations 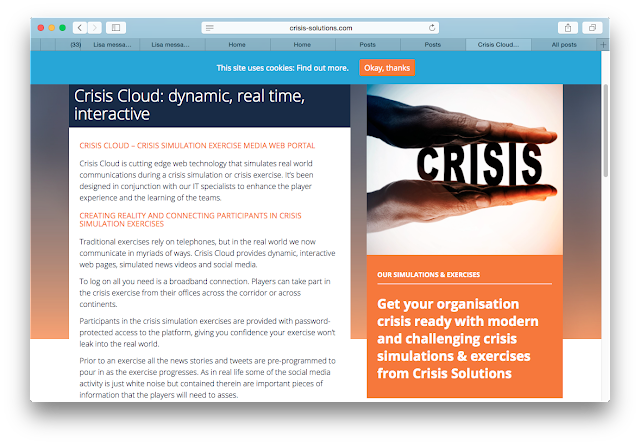 Crisis Cloud is cutting edge web technology that simulates real world communications during a crisis simulation or crisis exercise. It’s been designed in conjunction with our IT specialists to enhance the player experience and the learning of the teams.

Traditional exercises rely on telephones, but in the real world we now communicate in myriads of ways. Crisis Cloud provides dynamic, interactive web pages, simulated news videos and social media.
To log on all you need is a broadband connection. Players can take part in the crisis exercise from their offices across the corridor or across continents.
Participants in the crisis simulation exercises are provided with password-protected access to the platform, giving you confidence your exercise won’t leak into the real world.
Prior to an exercise all the news stories and tweets are pre-programmed to pour in as the exercise progresses. As in real life some of the social media activity is just white noise but contained therein are important pieces of information that the players will need to asses.
Crisis Solutions’ journalists will be phoning participants and updating news stories as the simulation exercises progress.
Similarly, players can put out internal messages to staff and external messages to journalists and other stakeholders. Thus providing an excellent audit trail after the event.
Crisis Cloud is constantly being updated with new features by our IT consultants.

CRISIS CLOUD – YOUR SCENARIO, OUR REALISM

Crisis Cloud is tailored to your specific exercise requirements, but a typical example will include:

Here is a Wikipedia article which looks as if it is not going to be there for very long - perhaps after being quoted by Debbie - who knows?

As I walked down the stairs from the airplane in Estonia, I thought "Wouldn't it be great to be waving to a cheering crowd right about now?" I had the same thought as I returned home to the [United] States. Life can be very cold at times, and nothing makes people happier than having people cheer for them.
— Adam Swart, founder and CEO of Crowds on Demand, 2013 interview with LAist[2]

The firm sells services that allow clients to simulate a celebrity lifestyle. Its “Celebrity Shopping Experience” is a trip through town in a luxury car, with cheering fans and paparazzi at every stop. The service was the subject of a “Good Morning America” piece in which a correspondent pretended to be the King of Liechtenstein while he went through a shopping mall with a paid entourage.[5]
The company also carries out publicity stunts for companies and public relations firms using actors.[6]
Just before the November 2012 election, company founder Swart said that the company was considering a request by a candidate for a staged political protest.[2] According to an article in the New York Post, Anthony Weiner paid Crowds on Demand actors to attend campaign rallies during his 2013 campaign for mayor of New York City.[7]

Crowds on Demand has come under criticism for selling the pretense of fame and popularity. Elizabeth Currid-Halkett, an associate professor at the University of Southern California Sol Price School of Public Policy, criticized the company for deceiving the public.[6]
A Washington Post columnist mentioned an e-mail he received advertising the company's “Celebrity Arrival Service” offered to politicians:[3]

I received an e-mail the other day from Crowds on Demand, an L.A.-based company that, for a fee, will send a bunch of “team members” to your event, stuffing the crowd with confederates to make you look important.

The service has been characterized as astroturfing. Dan Schneider, writing for The Atlantic, said "There might be some gray area between offering a small token of appreciation to otherwise voluntary supporters and full-blown astroturfing, but spending hundreds or even thousands of dollars to prop up a struggling cause seems to fit more squarely in the latter category." Schneider also noted that Swart admitted "a revelation that a campaign is paying for supporters is deeply embarrassing, and he takes great pains to keep his clients’ identities a secret."[4]
According to a February 2016 report for NBC Los Angeles, a paid protester claimed to be "a concerned citizen" when speaking out against a planned development in a city council meeting for Camarillo, California in 2015. He later stated to reporters that his role "was scripted, they told me what to say." Swart claimed the company has "worked with dozens of campaigns for state officials, and 2016 presidential candidates" but declined to identify his clients for fear of losing future business. Public records identified only one campaign, for the Six Californias, had paid Crowds on Demand.[8]

Watch Debbie's video here where she provides this information and ties it together with information from the Valentine's Day shooting
Posted by seemorerocks at 15:03