"Keeping the Russians at bay" - in their own backyard 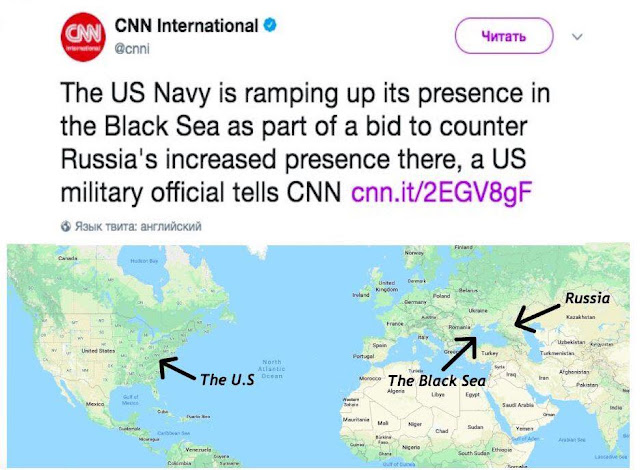 US show of force sends Russia a message in Black Sea

20 February, 2018
The US Navy is ramping up its presence in the Black Sea as part of a bid to counter Russia's increased presence there, a US military official tells CNN.
It's a region that has become increasingly fraught with tensions as Russia has reinforced its military forces in the area following its seizure of Crimea from Ukraine in 2014, a move rejected by the vast majority of the international community.
On Saturday the Arleigh Burke-class guided-missile destroyer USS Carney joined the USS Ross in the Black Sea to "conduct maritime security operations," according to a statement from the US Navy's 6th Fleet, which oversees US naval operations in the region. It's the first time two US Navy warships have been in the Black Sea since July 2017.
"Our decision to have two ships simultaneously operate in the Black Sea is proactive, not reactive," US Navy Vice Adm. Christopher Grady, the commander of 6th Fleet, said in a release announcing the Carney's arrival.
"We operate at the tempo and timing of our choosing in this strategically important region," Grady said, adding that "the continued presence of the U.S. Navy in the Black Sea demonstrates our enduring commitment to regional stability, maritime security of our Black Sea partners, and the collective defense of our NATO allies"
On Sunday Russia announced its own naval deployments to the area, with the Russian Ministry of Defense issuing a statement saying that a Russian frigate, the Admiral Essen, and two patrol ships had entered the Black Sea for a series of exercises.
A US military official told CNN that the decision to deploy both the Carney and the Ross to the Black Sea was part of an effort to "desensitize Russia" to the presence of US military forces in the Black Sea, which sits between Eastern Europe, the Caucasus and Western Asia.
Two US defense officials based in Europe told CNN that Russia is particularly sensitive to US military operations in the Black Sea given recent Russian moves to militarize Crimea.
US and NATO officials have accused Moscow of deploying large numbers of troops and military hardware to Crimea in recent years.
A NATO official told CNN that Russia had deployed submarines to Crimea, saying that while the Western alliance was not looking for a tit-for-tat deployment of military assets to the region, NATO was strengthening its position in southeastern Europe.
"Basically anything new that they have they are putting in Crimea," a US defense official based in Europe said of Russia's military activity.
The official told CNN that Russia was "putting in the full panoply of their weapons systems" in Crimea, saying Moscow had stood up a new Army Corps there and was deploying "a lot of their new anti-access missile systems, coastal defense, air defense" systems, in addition to the ground troops.
Given Russia's increased military presence, US officials say Moscow has become increasingly sensitive to US forces in the region, fearing that US military capabilities could undermine Russia's advantages.
Another US defense official based in Europe told CNN that the Russians "are very sensitive to our precision strike capability" as well as US ballistic missile defense assets such as the Aegis Ballistic Missile Defense System, which is deployed on both the Ross and Carney.
"You get ships up in the Black Sea, that makes them feel more threatened," the official added.
Officials say that same Russian sensitivity explains why Russian aircraft have appeared to perform more unsafe intercepts of US surveillance aircraft in the area than they do in other areas.
US officials say the surveillance flights are necessary to better understand Russian military activity.
"Russia is also not particularly transparent in what they do, which obviously requires us to then be able to monitor them by other means, and reconnaissance is one of those means," one defense official said.
An armed Russian Su-27 jet performed an unsafe intercept of a US Navy EP-3 surveillance plane while it was in international airspace over the Black Sea last month, flying within 5 feet of the US military aircraft, according to the US Navy. A similar incident took place in the skies over the Black Sea in November.
Following the January incident, the US State Department issued a statement saying that such unsafe actions "increase the risk of miscalculation, danger to aircrew on both sides, and midair collisions."
The Russian Ministry of Defense said the intercept was "in accordance with international rules for the use of airspace" and that the Russian jet had prevented the US plane from entering claimed Russian airspace near Crimea.
A Europe-based US defense official criticized Russia's attitude of ownership over the Black Sea, noting that "NATO nations have more coastline by far on the Black Sea than Russia does, so it's certainly not a Russian lake."
In addition to Russia, the Black Sea is bordered by NATO members Turkey, Bulgaria and Romania as well as NATO partners Ukraine and Georgia. NATO has boosted its activity in the area as part of its "tailored forward presence," which is headquartered in Romania, one of only six NATO nations to spend 2 percent of its gross domestic product on defense.
Officials say that given the heightened tensions and increased military activity in the region it is important to increase the frequency of US activity in the area and desensitize Russia to the presence of US military forces there, helping to establish rules for how the two countries should safely operate in proximity to each other, as they did in the Cold War.
"In the Cold War we had a dance we did and everybody knew their roles in the dance: You fly your bomber here, I'll fly my bomber there. You put a ship here, I'll put a ship there," another US defense official in Europe told CNN.


"I don't think we've got to that level yet, and so we're still trying to figure out what that dance looks like in the year 2018 versus what it was back in the Cold War, and I think there are some growing pains, obviously," the official added.
Posted by seemorerocks at 20:32