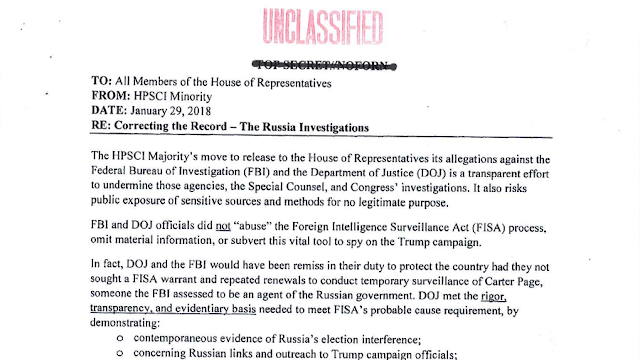 The US House Intelligence Committee has released a redacted, 10-page Democratic Party memo on the investigation into alleged Russian meddling in the 2016 US presidential election, which challenges the previously released

The Democrats’ rebuttal aims to challenge the alleged government surveillance abuses during the 2016 presidential campaign, that the GOP had outlined in their memorandum.

The document accuses the Republicans of selectively drawing on “highly sensitive information,” as well as of “other distortions and misrepresentations.” It also called the GOP memo a “transparent effort” to undermine the FBI, Justice Department and special counsel Robert Mueller. 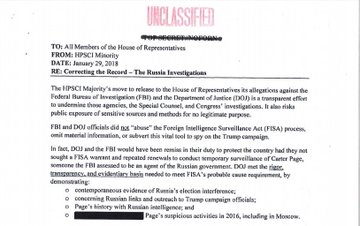 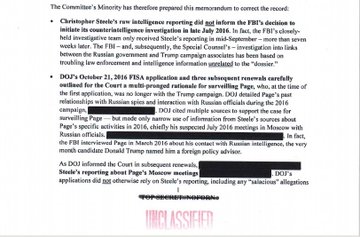 Earlier this month, President Donald Trump blocked the release of the Democrats’ rebuttal, sending the document back to the House Intelligence Committee for revision, citing “national security concerns.” The House Democrats heavily redacted the memorandum before releasing it on Saturday.

The opposing memos center on the FBI’s use of a Foreign Intelligence Surveillance Act (FISA) warrant during the election cycle to spy on Carter Page, a former Trump campaign adviser, on suspicions of him being a “Russian agent.”

The Republicans’ three-and-a-half-page memo, released earlier this month, claims that US law enforcement misled the court by not disclosing the fact that that they were relying on information in their investigation that was financed by Hillary Clinton’s 2016 presidential campaign and the Democratic National Committee.

The Democrats, however, disagree, claiming that “FBI and DOJ officials did not 'abuse' the Foreign Intelligence Surveillance Act (FISA) process, omit material information, nor subvert this vital tool to spy on the Trump campaign.”

“In fact, DOJ and the FBI would have been remiss in their duty to protect the country had they not sought a FISA warrant and repeated renewals to conduct temporary surveillance of Carter Page, someone the FBI assessed to be an agent of the Russian government,” the Democrats argue.

The White House called the release of the memorandum a “politically driven” attempt by the Democrats to “undercut” Donald Trump.

“While the Democrats' memorandum attempts to undercut the president politically, the president supported its release in the interest of transparency,” said White House press secretary Sarah Sanders. “This politically driven document fails to answer serious concerns raised by the Majority's memorandum about the use of partisan opposition research from one candidate, loaded with uncorroborated allegations, as a basis to ask a court to approve surveillance of a former associate of another candidate, at the height of a presidential campaign.”

Sanders reiterated that the FISA judge was never informed that Hillary Clinton and the DNC funded the controversial Christopher Steele dossier, which allegedly served as the basis for the FBI's surveillance request to spy on the Trump campaign aide. “As the President has long stated, neither he nor his campaign ever colluded with a foreign power during the 2016 election, and nothing in today's memo counters that fact,” Sanders added.

“The American people now clearly understand that the FBI used political dirt paid for by the Democratic Party to spy on an American citizen from the Republican Party,” said House Intelligence Committee chairman Devin Nunes (D-Calif), after the Democrats’ memo release. “Furthermore, the FISA court was misled about Mr. Page’s past interactions with the FBI in which he helped build a case against Russian operatives in America who were brought to justice.”
Posted by seemorerocks at 13:41