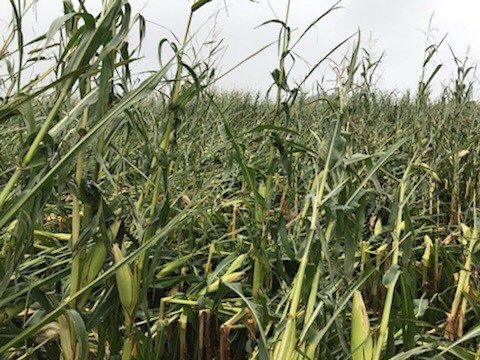 The pressure is on for Taranaki farmers to harvest maize crops that have been flattened by Cyclone Gita, before the crop starts to die and rot.

The cyclone hit the region on Tuesday with wind gusts of up to 140km/h.

Southern and coastal Taranaki farmers have struggled with drought this summer, but conditions were just right for growing maize - and a bumper crop was expected.

However, Taranaki Federated Farmers president Donald McIntyre said the cyclone might have put an end to that.

"Particularly in rolling contoured land there's extensive flattening of crops ... in south Taranaki there's been quite a bit of stripping of crops as well.

"I haven't talked to anyone with any definitive answers, but probably up to 50 percent damage on crops."

He said if contractors acted quickly, some of the maize should be salvageable.

'There are some really bad crops out there'

"There's different seed varieties and different maturity levels ... I've got a crop that's probably 80 percent flat and it's snapped off about 300 to 400 milimetres from the bottom.

"With the snap in the plant it's going to be interesting, we'll just have to gauge that over the next three to four days and just make sure it doesn't try and die and start to rot."

Mr Campbell said the aim was to get through about a hectare of maize an hour.
"We're just going to have to work with farm staff and have farmers with chainsaws and tractors to pull trees and things out of the crop so that we can harvest around it.

"The only good thing going out of south Taranaki this year was the good maize crops, now for them to be blown over it's like 'wow' - we'll never forget this year."

He said some crops were okay, but the damage was quite erratic which made it hard to analyse.

"There are some really bad crops out there ... it is pretty tricky [to harvest], but we're from Taranaki so we've set up our machinery to cater for this."

Newer harvesting machines were better at picking up damaged crops from an angle, and Mr Campbell said he was hoping farmers would not lose too much maize if they could get it off in time.

One of the main challenges was the obstacles cyclone Gita had thrown around the district, he said.

"There's logs, trees blown over in paddocks, hay barns that have blown over, we've got corrugated iron spread through paddocks," he said.

"All those little things are just going to slow us down.