Pakistan Plans Replacing Dollar With Yuan In Trade With China

Pakistan is considering replacing the U.S. dollar with the Chinese yuan for bilateral trade between Pakistan and China, Pakistan's Minister for Planning and Development Ahsan Iqbal said according to Dawn Online and The Economic Times. Interior Minister Iqbal, who has been central to the planning and implementation of China-Pakistan economic ties, was reported discussing the proposal after unveiling a long-term economic development cooperation plan for the two countries, Reuters added.

Iqbal spoke to journalists after the formal launch of Long Term Plan (LTP) for the China-Pakistan Economic Corridor (CPEC) signed by the two sides on November 21, Dawn online reported on Tuesday.  The CPEC is a flagship project of China's Belt and Road initiative. The 3,000 km, over $50 billion corridor stretches from Kashgar in western China to Gwadar port in Pakistan on the Arabian sea.
Asked if the Chinese currency could be allowed for use in Pakistan, the minister said the Pakistani currency would be used within the country but China desired that bilateral trade should take place in yuan instead of dollars, in yet another push to de-dollarize what China considers its sphere of influence.
"We are examining the use of yuan instead of the US dollar for trade between the two countries," Iqbal said, adding that the use of yuan was not against the interest of Pakistan. Rather, it would "benefit" Pakistan.

It would also show that world that when it comes to Asia, the "superpower" of significance is no longer the US. And so, as China's influence grows, the long-term plan highlighted key cooperation areas between the neighboring states including road and rail connections, information network infrastructure, energy, trade and industrial parks, agriculture, poverty alleviation and tourism.
The CPEC plan marks the first time the two countries have said how long they plan to work together on the project, taking the economic partnership to at least 2030. China has already committed to investing $57 billion in Pakistan to finance CPEC as part of Beijing’s “Belt and Road” initiative to build a new Silk Road of land and maritime trade routes across more than 60 countries in Asia, Europe and Africa.
Addressing the launching ceremony Chinese Ambassdor to Pakistan Yao Jing said the long term plan would expand the scope of cooperation in various new areas, including cooperation in social sectors along with economic fields. “CPEC was a national plan approved by the both the Chinese and Pakistan government.” It will effectively match relevant national plans of China as well as Pakistan Vision 2025."
The two nations also agreed to establish and improve cross-border credit system and financial services, strengthen currency swap arrangements as well as establish a bilateral payment and settlement system.... in yuan that is, not dollars.


US Vice President Mike Pence made a surprise trip to Afghanistan on Thursday, meeting with both Afghan President Ashraf Ghani as well as making a speech before US troops 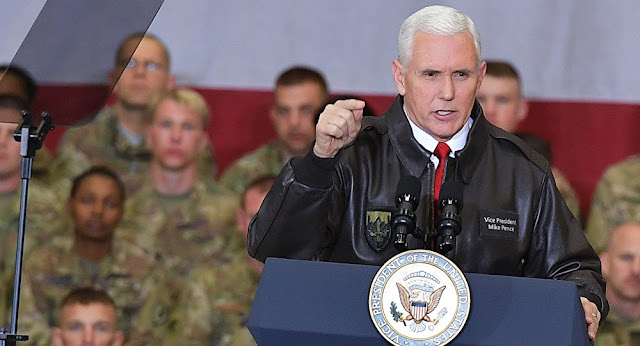 Pence arrived at the central US base at Bagram Airfield before flying via helicopter to Kabul, where he met with Ghani and Chief Executive Abdullah Abdullah.

During his visit, Pence underscored the American commitment to peace and stability in Afghanistan. He claimed that his presence should be taken as evidence that the US was "here to see this through."

Fighters of the al-Qaida-inspired Islamic State of Iraq and the Levant (ISIL) parade in a commandeered Iraqi security forces armored vehicle down a main road at the northern city of Mosul, Iraq. (File)

It was also reported that Pence discussed both the implementation of the new US strategy in Afghanistan and the country's upcoming parliamentary elections slated for July 2018.

Afterwards, Pence returned to Bagram to address hundreds of US troops, who gathered in an aiport hangar at the base. He also took a potshot at Pakistan, a nominal US ally that Washington has accused of harboring criminal and Islamic terrorist elements, saying Afghanistan's neighbor has much to gain from working with the US and much to lose by harboring its enemies. US President Donald Trump has "put Pakistan on notice," the vice president said, and the days of Pakistan providing safe haven to terror groups are "over."

In August, Trump announced his strategy for Afghanistan, with the major change being a shift to an open-ended war against Taliban and al-Qaeda militants with milestones based on goals rather than dates. He also called for a larger military presence in Afghanistan, the opposite of his campaign promise to swiftly withdraw US forces.

Eleven thousand US troops were stationed in Afghanistan in August, and the number has increased since then to an estimated 15,000. That number is expected to climb to 16,000 in 2018. This is still far lower than the 100,000-odd US troops stationed there in 2010, when former President Barack Obama began a withdrawal.

Previously, top Washington officials such as Defense Secretary James Mattis and Secretary of State Rex Tillerson met with Afghan leaders — but this is the first time that the vice president has visited. Pence did meet with Ghani in Germany in February. Trump himself has yet to make a trip to Afghanistan.


The US invaded Afghanistan in 2001, and has maintained a troop presence in the Central Asian nation ever since. With the war having recently turned 16, it is the longest-running armed conflict in American history.

Posted by seemorerocks at 18:15