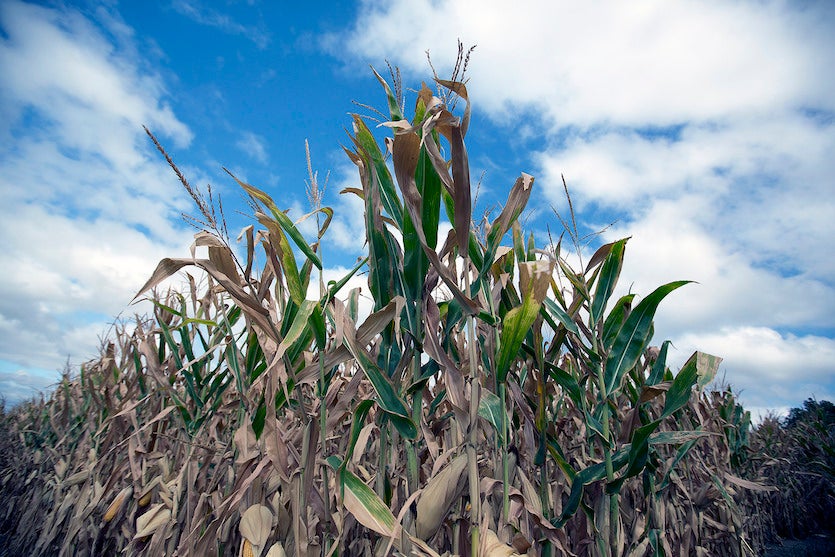 
Above: A drought-stricken cornfield in Missouri Valley, Iowa, on Aug. 13, 2012. Widespread drought afflicted the U.S. in 2012 after a third consecutive winter of La Niña conditions. Image credit: Dave Kosling/USDA

La Niña, characterized by a cooling of sea surface temperatures (SSTs) in the central and eastern equatorial Pacific, is the rough counterpart to El Niño, which warms the same region. It’s long been known that La Niña favors drought across the southern United States. During La Niña, sinking air tends to predominate across the Sun Belt, blocking moisture-laden storm systems. This is the result of a large-scale atmospheric feature called a Rossby wave that propagates northward from La Niña’s center of action in the eastern tropical Pacific.

What hasn’t been examined much till now is how U.S. drought risk might evolve from one year of La Niña to the next. Many El Niño events unfold in a year or less—building in northern autumn, peaking in winter, and waning by spring. In contrast, La Niña conditions often recur for two northern winters in a row, and sometimes they come back for a third. That was the case in the three winters from 2009-10 to 2011-12, a period that culminated in major drought across the southern tier of states (especially Texas) in 2011, and over much of the U.S. in 2012.

Wildfire threatens a home near Possum Kingdom, TX, west of Fort Worth, on April 19, 2011

Figure 1. Wildfire threatens a home near Possum Kingdom, TX, west of Fort Worth, on April 19, 2011. Severe drought in 2011 across Texas set the stage for major fires and killed some 300 million trees across the state. Image credit: State Farm.

The second time around

Together, these 10 multiyear events are correlated with a weaker wintertime subtropical jet, shunted further north than usual across the U.S., as opposed to the intensified subtropical jet during El Niño that often hauls wet winter storms into California and across the Sun Belt. The authors found that during the second year of La Niña, the SST signature in the equatorial Pacific tends to be weaker along the equator, but broader overall, than during the first year.

Okumura and colleagues also found that the U.S. drought signal in year two tends to expand northward and eastward, from the Southwest and Southern Plains into parts of the Midwest and Southeast. This occurs in tandem with a strengthening of the atmospheric response to La Niña across the North Pacific.

Figure 2. Especially in winter, La Niña tends to produce drier-than-average weather across the U.S. Sun Belt and wetter-than-average conditions over the Pacific Northwest. In some years, drought can expand further north into the central U.S. Image credit: NOAA.

The case for an expanded U.S. drought risk in second-year La Niñas isn’t yet rock-solid. For one thing, the authors stress that natural variability can push any particular La Niña (or El Niño) event outside the envelope. A recent case in point: based on the West Coast fingerprint of the very strong El Niño events of 1982-83 and 1997-98, forecasters expressed high confidence that the comparably strong 2015-16 El Niño would likely lead to a wet Southern California and a dry Pacific Northwest. Yet SoCal got less moisture than average, while Seattle ended up with record rains.

There is conflicting evidence in climate models as well. Okumura and colleagues examined two sets of models that replicated 20th-century climate patterns based on observed SSTs. These models didn’t consistently show the second-year expansion in drought risk found in observations, which could indicate deficiencies in the models but could also mean that the result was an artifact of small sample size.

“My concern is that the observational sampling is far too small to draw the strong conclusions offered, and that the lack of modeling support undercuts the interpretation of the authors,” said Martin Hoerling (NOAA/ESRL Physical Sciences Division) in an email.

Okumura responded: “Although the observational sampling is limited, the linkage between broader tropical Pacific SST forcing and stronger North Pacific atmospheric response is a robust result supported by all 112 years of data. It is important to know that La Nina’s impacts do not simply decay with equatorial Pacific cooling. This knowledge would help the regions affected by La Nina droughts to take more cautionary actions on water restrictions and agricultural planning during multiyear events.”

Is there hope for predicting multiyear La Niñas?

Even if there’s no robust difference between first- and second-year La Niña impacts, we know there is still an increased risk of southern U.S. drought in both years, so any ability to predict La Niña duration could be valuable in gauging multiyear drought risk. Analysis by Pedro DiNezio, a colleague of Okumura’s at the University of Texas, indicates that the duration of an upcoming La Niña is based mainly on the intensity of the preceding El Niño.

When the record-breaking El Niño of 2015 peaked, DiNezio and colleagues set out to predict the duration of the ensuing La Niña. Two models used by DiNezio predicted that the ensuing La Niña would last two years and therefore return this winter. The results, published in GRL in November, showed a 60% to 80% chance of La Niña’s return in 2017-18.

Getting any such multiyear forecast approach into operational use would take some doing. Currently, NOAA’s official forecasts of El Niño and La Niña extend no more than a year out, due largely to resource constraints. “The vast majority of our model guidance is run out to 9 or 12 months, so [a two-year forecast] is not something we can even consider unless there is a substantial time and computing effort made into extending out the prediction horizon,” said Michelle L’Heureux (NOAA/CPC) in an email.

Running ocean-atmosphere climate models at longer time frames would be more expensive, and the benefits would be limited by low forecast skill beyond a year out. However, the research by Okumura and DiNezio suggest that extending these forecasts out to two years could be worthwhile at certain times when the conditions are favorable for a skillful forecast—such as during a strong El Niño, which appears to favor a longer-lasting subsequent La Niña. Toward this end, Okumura and DiNezio are now part of a comprehensive three-year effort to test the feasibility of operational multi-year forecasts of the El Niño/Southern Oscillation (ENSO). They’re drawing on support from NOAA and the National Science Foundation.

As recently as last May, forecast models and official outlooks were leaning toward a new El Niño in 2017–18, whereas a second year of La Niña is now taking shape. The 2016-17 La Niña was the weakest on record, barely meeting the minimum thresholds. The current La Niña is slightly stronger, though still in the “weak” category for now. Interestingly, “this is the first time on record the [Niño3.4] surface temperature has been warmer than average for a period before returning to La Niña conditions,” noted Emily Becker (NOAA) in a climate.gov update last week. 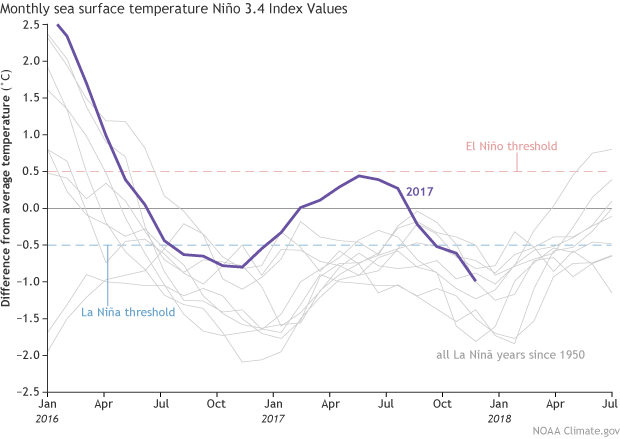 Figure 4. Monthly sea surface temperature in the Niño 3.4 region of the tropical Pacific compared to the long-term average for all multi-year La Niñas since 1950, showing how 2016-17 (blue line) compares to other events. Multi-year La Niña events are defined as at least 2 years in a row where the La Niña criteria are met. Both continuous events, when the Oceanic Niño Index remained below -0.5°C, and years when the ONI warmed mid-year before again cooling, are included here. For three-year events, both years 1-2 and 2-3 are shown. Climate.gov graph based on ERSSTv5 temperature data. Image credit: climate.gov.

Figure 5. The U.S. Drought Monitor showed a dramatic expansion of abnormally dry areas (yellow) from Nov. 14 to Dec. 19, 2017. The fraction of the country covered by at least moderate drought (D1-D4) doubled from 13% to 26%. Image credit: National Drought Mitigation Center.

Despite the startling snowfall from South Texas to Georgia, it’s been a very dry December overall across most of the nation. As shown in Figure 5 above, the latest weekly U.S. Drought Monitor shows that the fraction of the U.S. covered by drought conditions (categories D1 to D4) doubled in just a month—from 13% on November 14 to 26% on December 19. A much larger chunk of the nation, 56%, was either abnormally dry or already in drought, up from 35% in early November. The last time that index hit 60% was in October 2013.

Other signs of drought trying to set in:

• The water year in Southern California (Oct. 1 –Sep. 30) is off to one of its driest starts in more than a century of recordkeeping. From October 1 through December 21, downtown Los Angeles received just 0.12” of rain and San Diego a mere 0.09”. In both cities, just three other years have been drier. Precipitation has also been scant in Northern California this month, although San Francisco’s 3.40” for the water year to date is only its 32nd driest in records back to 1849-50. Even so, “the odds of an above-normal rainfall season are slim,” tweeted Jan Null (Golden Gate Weather Services).

• A huge swath of the U.S. from California to New York received less than half of its average precipitation in the 30-day period ending on Thursday.


• Some parts of the Midwest have yet to see their first measurable snow of the season. Waterloo, Iowa, got its first snow on Wednesday, Dec. 20, which tied a record-late first-snow record set in 2004. Des Moines got 0.1” of snow on Thursday, Dec. 21, the latest first snow in any year except for 1939 (Dec. 26).
Posted by seemorerocks at 18:04