On skid row Christmas 2017 in the world's "wealthiest nation"

Many have erected tents and tarps to form shelter.

The area is consired to be one of the most dangerous places in LA.

Amongst the homeless are women and children.

It's evident after a drive around that many have mental health problems.

The area is home to a number of shelters and rescue missions providing shelter to the lucky few and food.

The rising cost of rent and housing in California is forcing residents into alternative accommodation with middle class workers taking up residence in their cars and RVs by the side of the road to make ends meet.

Hundreds of people, including nurses and chefs, are sleeping in parking lots in affluent areas like Santa Barbara as they make the most of the only homes they can afford.

Marva Ericson, who works as a nursing assistant, has been sleeping in her Kia for the past three months. She wakes up before dawn each day, showers at the local YMCA and dresses in her hospital scrubs to head to work 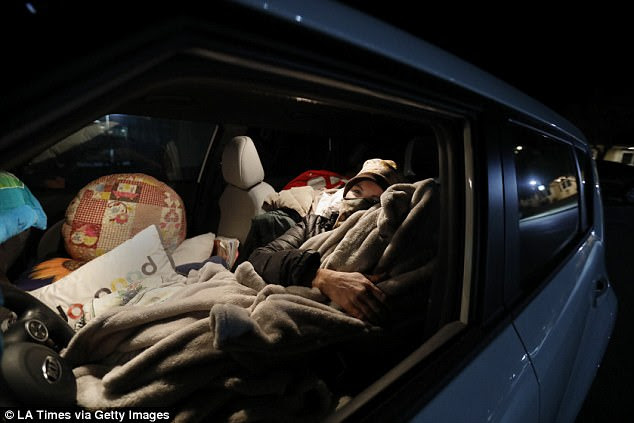 +Marva Ericson, who works as a nursing assistant, has been sleeping in her Kia for the past three months in parking lots around Santa Barbara, California

'I wake up and I say, 'Thank you God for keeping me safe last night, and thank you for the Safe Parking program',' the 48-year-old told the LA Times.

Like Ericson, most of the people sleeping rough in their cars are part of the area's Safe Parking program, which is run by the New Beginnings Counseling Center and aims to provide a secure area for the homeless to sleep in their vehicles.
The program has roughly 150 clients and 40 per cent of those are working but they just can't afford an apartment with the rising cost of housing.
About 35 per cent of those in the program are seniors and about 30 per cent are disabled. The majority are living out of their small cars with only 25 per cent sleeping in RVs. 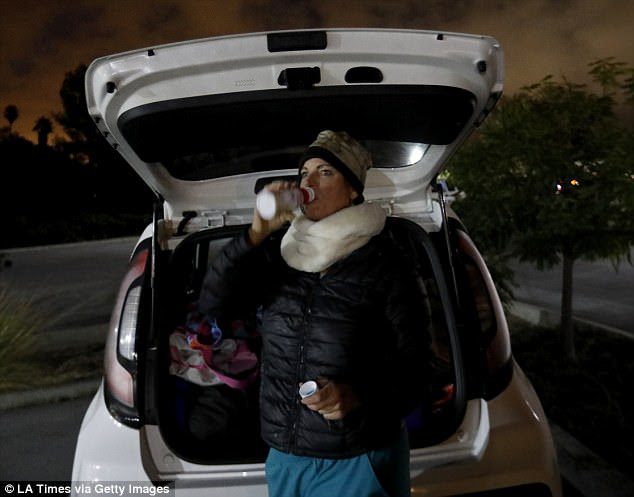 +9The 48-year-old wakes up before dawn each day, showers at the local YMCA and dresses in her hospital scrubs to head to work 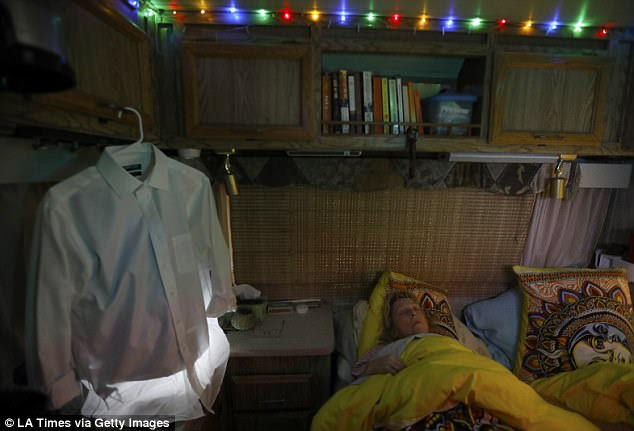 +Kathy, 65, and Phil, 74, have been living together in their old RV after losing their condo in 2013. Kathy said she hung up Christmas lights inside the RV for the holiday season 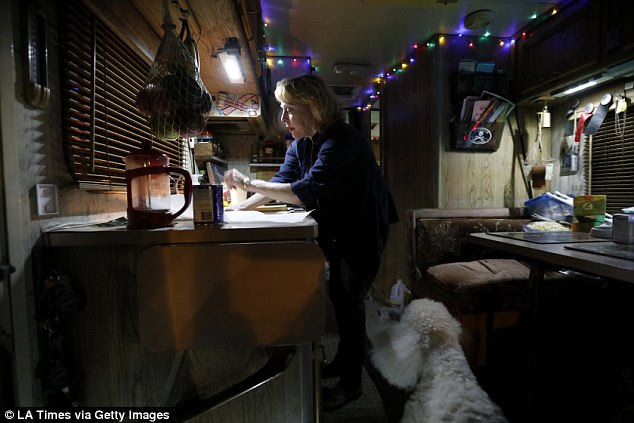 Kathy, 65, feeds her aging Standard Poodle in her RV in a parking lot in Santa Barbara. She says she spent her career working as a paralegal and was a homeowner until 2013 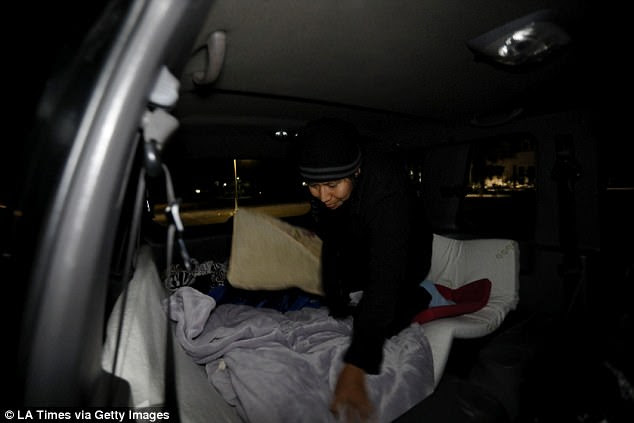 Ericson ended up homeless after a series of medical set backs. She suffered a number of seizures that forced her to quit her job and was eventually diagnosed with a brain tumor.

She overcame the illness while caring for her dying mother and is now working two different jobs to make ends meet. Up until three months ago, Ericson was living in apartments for $1,000-1,600 a month but became homeless when she fell behind in rent.

'I was always into December and making the house wonderfully warm and beautiful,' Kathy said of the holiday season. 'I've got some little lights on the ceiling of the RV and I got out my mom's old snow globe, with a music box on it.'

Santiago Geronimo, who is a chef at a high-end Santa Barbara restaurant, has been living in a Ford Explorer for three months with his girlfriend and her eighth-grade son Luis.

The Safe Parking program, which has been running for 12 years, allows clients to stay overnight in the parking lots of churches, not-for-profits and government offices.

Clients can park their cars after 7pm and need to be gone by the early morning.

In Santa Barbara alone, there are 23 parking lots currently used for the Safe Parking program.

There is also a waitlist of 40 people desperate to take part. 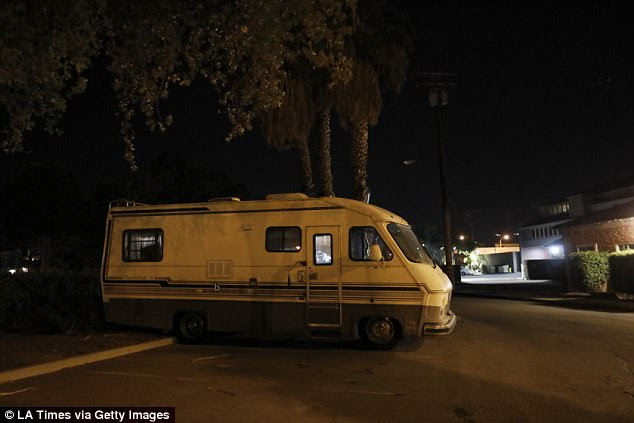 +9
Kathy, 65, and Phil, 74, live together in this RV along with their aging Standard Poodle 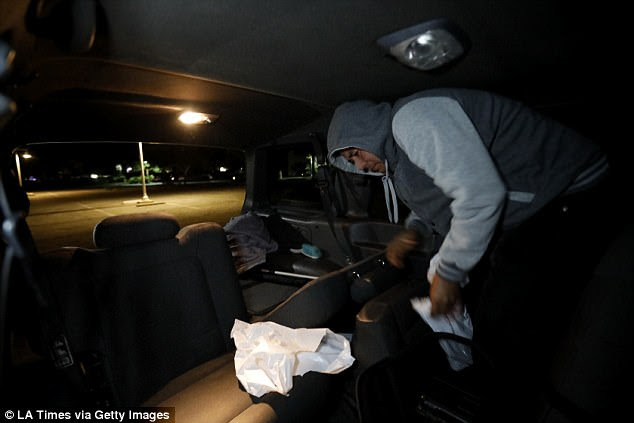 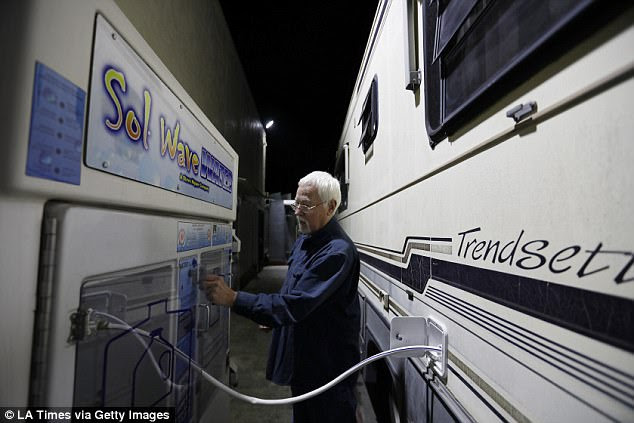 +9
Phil, 74, is outside his RV paying for filtered water with quarters for his RV 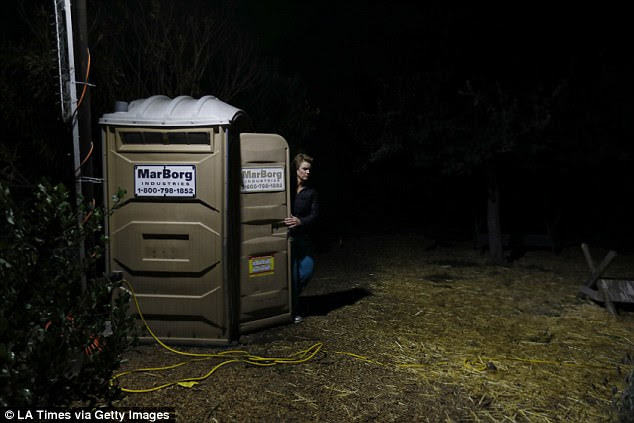 +9
Marva Ericson, 48, exits a porta potty in a parking lot in the middle of the night in Santa Barbara. She is part of a safe parking program for people living in their vehicles
Posted by seemorerocks at 16:02