Warnings of a New Year attack in Denver and Los Angeles

I was treating this warning with some caution and was going to listen to what Mr. Turner was going to say but as of now (the scheduled broadcast) he appears to be under DDoS attack.

I don't like Hal Turner's politics but I fail to see why anyone would be bothered with taken him off the air if he was just a kook. Someone appears to think that what he has to say is dangerous. 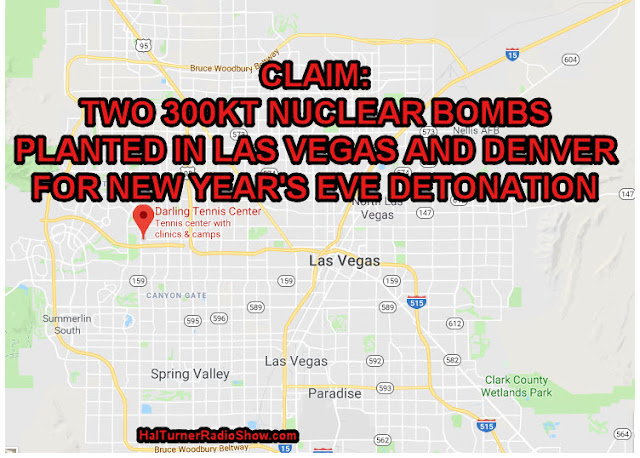 An individual allegedly from India, is screaming over social media that he knows of two 300 kiloton nuclear bombs that have been smuggled into the United States through Houston, TX, that have been planted to detonate on New Year's Eve.  One is allegedly in Denver, CO, the other at the Darling Tennis Stadium in Las Vegas, NV.
Mr. Sandeep Gundale of Pune, India, began sounding the alarm on November 6, with a Twitter posting that says


Again, on December 19, he tweeted asking if anyone could tell him how to contact President Trump to warn him about the pending nuclear blasts.  His tweet from December 19 appears below:

Sandeep Gundale@GundaleSandeep
Is there way to reach me download Trump and tell them what is going to happen plz suggest mi it's a total conceit information plz suggest something to mi https://twitter.com/MichaelGJudd/status/942789915682603011 …

Twitter Ads info and privacy
On December 26, he again began saying the same things in a series of Tweets that name the "Darling Tennis Stadium" in Las Vegas as one location where a 300kt nuclear bomb has been stashed to detonate:

Sandeep Gundale@GundaleSandeep
There is a bomb in Las Vegas in darling tennis statdium right now they want to blow at new year evg I call FBI recentlly I tell them just 5 min before bomb having capacity ok 300 kt https://twitter.com/BDWatcher/status/945708905828675584 …

Twitter Ads info and privacy
Later on December 26, he changes his story to say there is only ONE nuclear bomb, but is adamant it is located in Las Vegas and in another Tweet claims it is an ISIS terrorist group attack:

Sandeep Gundale@GundaleSandeep
It's true there is a bomb in Las Vegas right now first I have information about two points but there is only one bomb at darling tennis center staydium there in Las Vegas today morning I got that information having capacity of 300 kt https://twitter.com/pamhoffca/status/945708519126310912 …

Sandeep Gundale@GundaleSandeep
Sir there is Nuke in LasVegas Darling Tennis center staydium plz search stadium & save innosants isis behind that I tell FBI Las Vegas& NRC team they are going threw it &I twitted ur Mr President for that isis behind that plan to detonate at new year Eve wrt now they are there https://twitter.com/blondenfun1/status/945732921222139904 …

There is a small photo of Sandeep Gundale on his Twitter page, as shown below:

He claims to be a software engineer who found out about this and is doing his best to help Americans find the bomb and save lives.

Sandeep Gundale@GundaleSandeep
Think just sake of humanity IAM doing this think after recovering of that bomb they want to blow my ass that time what will I do iam well educated am an software engineer ok just for ur lives I am doing this ok
God bless u all https://twitter.com/rudra_klsh/status/945743491384033280 …

There are online programs that simulate the effects of a nuclear blast in order to give the public an idea of the extent of damage and injuries that might take place in such an event.  One such program is called "NukeMap."
According to NukeMap, a 300kt ground detonation of a nuclear bomb at the Darling Tennis Stadium near Las Vegas would cause an immediate death toll of 42,820, with another 119,200 injured.
First, here is a scalable map of Las Vegas with the Darling Tennis Stadium as its center point:

Here is what NukeMap claims would be the likely damage area:

Here is what NukeMap says would be the bigger picture as far as radioactive fallout . . . . reaching all the way to Utah!

Here is the legend for both maps above, showing what the colors on the maps mean and the toll of Deaths and Injuries: 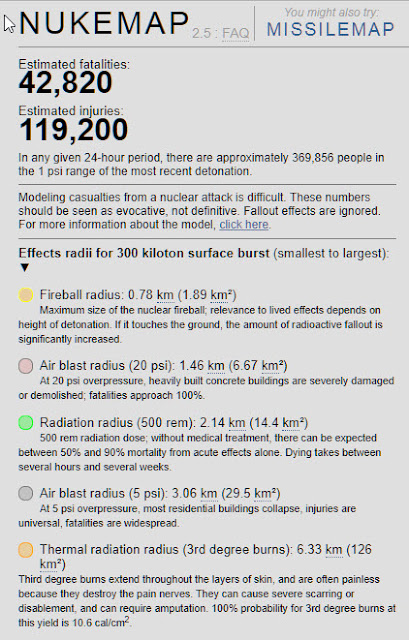 Calls to the FBI for comment have not yet been returned.

The FBI's National Press Office in Washington DC told me by email they "decline comment."
Hal Turner Note:  This seems peculiar to me.  If there was nothing to this story, it seems to me they would be fast to say "there's nothing to it."  Instead, I received a polite email saying "Hi Hal. Thanks for reaching out. However, the FBI will decline comment."