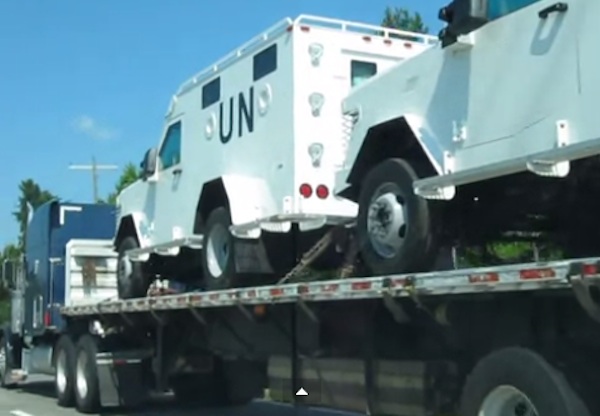 Military troops and vehicles, thought to be UN Peacekeepers, have entered the streets of Chicago as Martial Law is imposed on the city.

Despite the emergence of heavily armed forces in the third largest city in the United States, there’s a total mainstream media blackout on the events.

According to WCKG 1530 AM operator Matt Dubiel, the radio station was “shut down” when they aired a report by Alex Jones that revealed witness reports of troops on the ground.

Dubiel claims that as soon as Jones mentioned United Nations vehicles having already entered the city, the radio feed was cut and they were “taken off the air.”

According to Intellihub, over 50 heavily armored United Nations vehicles and various pieces of equipment (generators, etc.) sufficient enough to support a small army of “peacekeeper” troops were found sitting on the deck behind a U.S. government-owned warehouse and appear to be ready for rapid domestic deployment.

The vehicles are parked in the rear parking lot of a warehouse building located at 11841 New Gate Blvd.

They were all painted white and bear the letters “U.N.”

This followed reports that government officials had requested drastic measures to tackle violence city streets in the United States and are in discussions with the United Nations about deploying “Blue Helmet” Peacekeeper troops in Chicago.

The calls had come from Cook County Commissioner Richard Boykin in response to what he calls the “quite genocide.”

WCKG’s Matt Dubiel reported in August that he had spotted a trainload of U.N. vehicles entering the city of Chicago.

He maintains that when he was followed and arrested after witnessing the arrival of the military equipment.


If true, this may indicate that Martial Law has been planned well in advance, with vehicles already in position, ready to mobilize.