US alleges China is exporting oil to North Korea 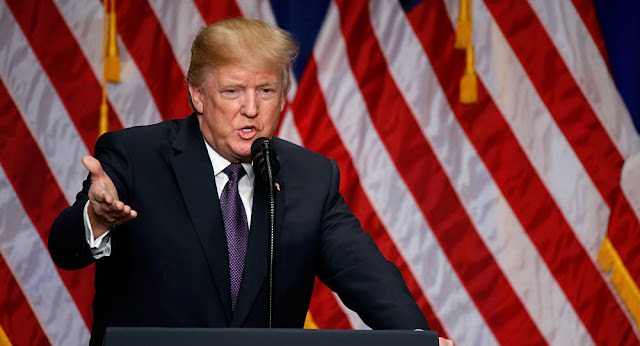 China has commented on reports alleging that it exports oil to North Korean by saying that Beijing"completely and strictly" implements UN trade restrictions recently adopted against Pyongyang.

US President Donald Trump has reacted to reports on China's alleged oil exports to North Korea, violating the December 22 UN trade restrictions introduced against the country, limiting their oil deals to four billion barrels per year.
"Caught RED HANDED — very disappointed that China is allowing oil to go into North Korea. There will never be a friendly solution to the North Korea problem if this continues to happen!" Trump wrote on his social account.
Following Trump's statement, US Senator Edward Markey said that the president should come up with a clear strategy to stop crude oil supplies from China to North Korea.
"The North Korea nuclear threat has only increased since Donald Trump took office," Markey wrote in the statement via Twitter. "This administration needs to find a way to get China to cut off the crude oil flowing into North Korea. The solution is a coherent strategy, not bluster."
However, the report published by South Korean newspaper Chosun Ilbo has already been refuted by China's foreign ministry spokesperson Hua Chunying on December 27, who stated that Beijing had no information on this issue, emphasizing that the country "completely and strictly" implements UN sanctions.

The report has claimed that Chinese ships had transferred oil to North Korean vessels about 30 times in October.

This stance was echoed by Chinese customs data, presented by the Reuters news agency. According to the information, China has not exported any oil products or gasoline, jet fuel, diesel or fuel oil to North Korea in November, following the UN restrictions. The country also has not been importing any iron ore, coal or lead from North Korea during the mentioned period, as the media specified.
Despite softening his stance towards Beijing in an effort to secure more assistance on issue areas relating to the Korean Peninsula, Trump has listed China among key threats to the US and global security in his new national security strategy. Moreover, he had previously accused the country on the campaign trail for alleged unfair trading practices, such as engaging in artificial currency devaluation.
READ MORE: Ex-CIA Officer: Trump's NSS May Draw US Into More Overseas Conflicts


A recent US spy satellite photo showing Chinese ships selling oil to North Korean ships in violation of UN Security Council resolutions is supposed to infuriate us. But sanctions are immoral, they hurt the most vulnerable, and the never work.

North Korea was barred in September by the United Nations Security Council from importing natural gas and had its crude oil imports capped in response to Kim Jong Un’s nuclear missile program.
The U.S. Treasury in November also sanctioned North Korea’s Maritime Administration and its transport ministry, in addition to six North Korean shipping and trading companies and 20 of their vessels, in an effort to block the rogue regime’s transportation networks.

The satellite images appear to identify the ships. One of them — Rye Song Gang 1, seen “connected to a Chinese vessel” — was included in the Nov. 21 sanctions as a vessel of Korea Kumbyol Trading Company possibly transferring oil to evade sanctions.

While Russia exports some oil to North Korea, China is the main source of oil for the rogue nation, according to Reuters. However, the country exported no oil products to the North during the month of November. It was reportedly the second consecutive month China didn't export diesel or gasoline to North Korea


NORTH KOREA CALLS UN SANCTIONS 'AN ACT OF WAR,' 'RIGGED UP BY THE US'

“This is a natural outcome of the tightening of the various sanctions against North Korea,” Cai Jian, an expert on North Korea at Fudan University in Shanghai, told the news organization. Cai added the "tightening ... reflects China's stance.

It's unknown if China supplies crude oil to the North, but it's believed by industry insiders that China provides the cutoff nation 3.8 million barrels of crude oil each year through an "aging pipeline," Reuters reported.

A government source told the South Korean newspaper that, "We need to focus on the fact that the illicit trade started after a UN Security Council resolution in September drastically capped North Korea's imports of refined petroleum products."
Robert Kelly, a professor at Pusan National University in South Korea, told The Telegraph that China trading oil to North Korea could be possible.

a lot of under-the-radar on the Chinese side," Kelly said. "Beijing does not polic the border strictly or enforce the sanctions toughly. This could be that."


Chinese foreign ministry spokeswoman Hua Chunying said she had no information following Chosun’s report, but said “the Chinese government has been completely and strictly enforcing Security Council resolutions” aimed at discouraging North Korea from developing nuclear and missile technology.
Hua questioned whether any country could make sure "not a single breach will happen,” but noted: “We are taking a sincere and serious attitude and forceful and effective actions."