I have been working happily on the internet UNTIL THE VERY MOMENT I tried opening the link associated with this and tried working with it.

Got there in the end though. 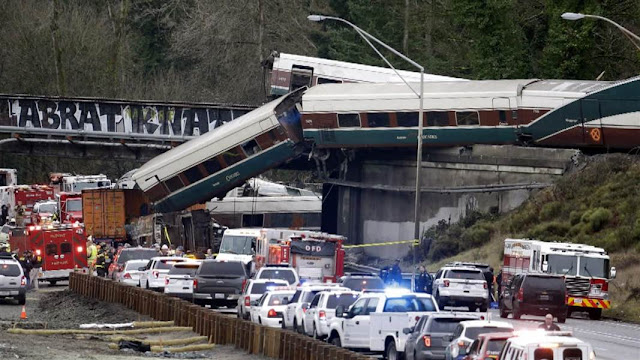 BUSTED BUSTED BUSTED. I tried to post this at 1 PM today but my bandwidth ran out. HERE IT IS.

Three separate news anchors reported that the state and city were on scene ready to respond instantly to the train wreck because they were running an enormous disaster drill at the exact time and location of the Amtrack derailing.
This confirms 100 percent that I was completely right when I said the train was going 30 and was knocked off the tracks on purpose. It might have been going less but was absolutely not going faster. The bottom line is that this train went off the tracks AS PLANNED by saboteurs who were operating via the shadow state at the state level. The following video proves it.

In this video (which is served by this web site and not Youtube because it is sure to get censored) three different news anchors, two of them who are on scene, talk about “how lucky they were” that an emergency preparedness drill was happening at the train crash site right at the exact same time the train went off the tracks (obviously to make the drill as realistic as possible I guess).

SEE THIS, and you can right click and save this video. I suggest you do.

to get to Jim Stone’s secure website, enter the following URL into your search engine: 82.221.129.208 and scroll down to the story you wish to read. Under the video there for the Amtrak false flag story is more on the Israeli plane and the recent event at the Atlanta airport.

I saved and uploaded the video so it doesn’t disappear.  ~ BP