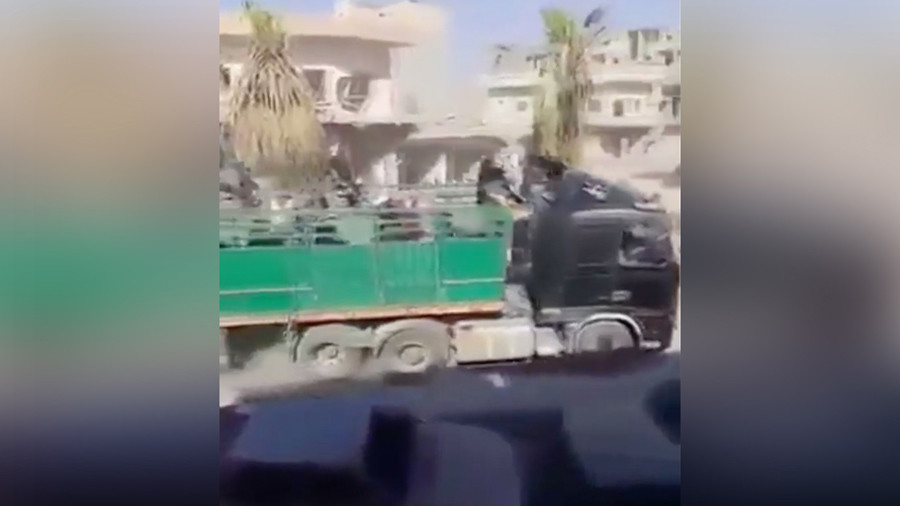 RT’s Ruptly video news agency has spoken with SDF fighters in Syria, who confirmed for the first time that Islamic State (IS, formerly ISIS) militants freely left Raqqa in what was previously described by a BBC investigative report as an IS “exodus.” The SDF fighters were on watch when they witnessed and filmed heavy trucks, buses and cars carrying IS militants from the liberated city

“We saw them with our own eyes. I was on shift at the grain containers turnabout when IS were leaving. There were many of them, we were not afraid of them,” one SDF fighter told Ruptly in late November. He showed the footage featuring the convoy on his mobile phone, saying that he had recorded it and kept it.
“I saw IS, they left with locomotives and buses, they took their luggage and headed towards Rumelan,” another SDF fighter said. “They carried on till Deir [ez-Zor]. I don’t know where they headed to after that, whether to Abu-Kamal or to Mayadeen, they took that road."
He added there were about 1,000 injured IS fighters and about 2,000 who seemed unhurt.
In November, the BBC reported that a “secret deal” between the US and British-led coalition and the Kurdish forces allowed hundreds of IS terrorists to leave Raqqa peacefully in a long convoy comprised of up to 50 trucks, more than a dozen buses and around 100 other vehicles. Initially neither the coalition nor the Kurdish forces admitted their part in giving free passage to the terrorists. However, Col Ryan Dillon, spokesman for Operation Inherent Resolve, later said the deal was never a secret, confirming Washington accepted the agreement.
The Syrian city of Raqqa, once the de facto IS capital, came under the control of the SDF on October 20, following four months of airstrikes, artillery shelling and heavy urban fighting. What was left of the city was described by international journalists as “hell on Earth” due to the scale of destruction. With some 80 percent of the city destroyed, Raqqa remains a heavily-mined “ghost town.”
“Raqqa’s fate calls to mind that of Dresden in 1945, leveled by the US-British bombings,” the Russian Defense Ministry said following the US-spearheaded “liberation,” referring to the notorious World War II air campaign, during which American and British bombers obliterated the center of the German city, killing some 25,000 civilians.