Of course there’s ‘plenty’ of oil (even it is in the form whereby we have to fry the planet to get it) and we’re moving in a nice orderly manner away from an oil-based economy.

Peak Oil is just a theory that has been 'proved wrong'.

That is the kind of bullshit we are being fed just about every day. 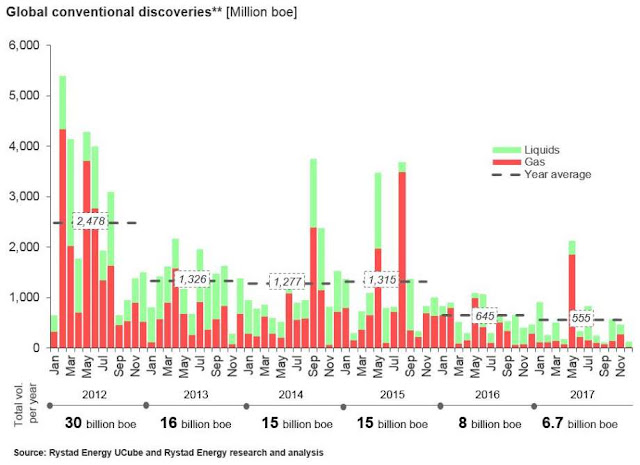 “We haven’t seen anything like this since the 1940s,” says Sonia Mladá Passos, a senior analyst at Rystad. “We have to face the fact that the low discovered volumes on a global level represent a serious threat to the supply levels some 10 years down the road.”

In 2012, companies discovered four times that — more than 30 billion barrels.

Most worrisome, Passos said: the year’s finds would replace just 11 percent of the world’s production this year. The last year the reserve replacement ratio hit 100 percent was 2006; by 2012, it had dropped to 50 percent.

Passos in part blamed exploration budgets, which she said have decreased for three consecutive years, falling by more 60 percent in total.

“We need to see a turnaround in this trend,” Passos said in the report, “if a significant supply deficit is to be avoided in the future.”
Posted by seemorerocks at 19:42