A vote in Catalonia

Pro-independence parties have again secured an absolute majority in the Catalan parliament, with former regional leader Carles Puigdemont poised to regain the power he had been stripped of by Madrid.

With over 99.5 percent of the votes counted, the trio of pro-independence parties: the Together for Catalonia (JxCat), headed by deposed regional president Puigdemont, the Esquerra Republicana (ERC) and the Popular Unity Candidacy (CUP) are likely to secure 70 parliamentary seats collectively, with 68 required for an absolute majority in the 135-seat assembly.

Although the Citizens Party won the election by a small margin in terms of vote share, it will only pick up 37 seats, and unlikely to form a unionist majority.

While the preliminary results signal a likely victory for the secessionists, it shows a great rift among Catalans on the question of independence. The unionist and pro-independence parties are only separated by a couple percent of votes.

The snap elections were called by Spanish Prime Minister Mariano Rajoy in October, in the aftermath of the independence referendum deemed illegal by Madrid. The October 1 independence plebiscite was marred by a central government sanctioned police crackdown on voters.

Madrid tried to downplay the violence, claiming that media materials on the chaotic referendum, contained “fake pictures.” The actions of Madrid, however, were condemned by several international organizations, including Human Rights Watch.

The NGO analyzed photos and videos from the day pf the referendum and concluded they depicted “disproportionate use of force” against peaceful demonstrators “expressing their political opinion.”

Following the declaration of independence by the Catalan government late in October, Spain responded by suspending the region’s autonomy and dismissing its government. Several pro-independence politicians were jailed, while deposed president Puigdemont managed to flee to Brussels. He had said that he would return to Catalonia if he wins. His supporters, however, fear he might be arrested, since Madrid has accused the politician of inciting a rebellion and misusing public funds. 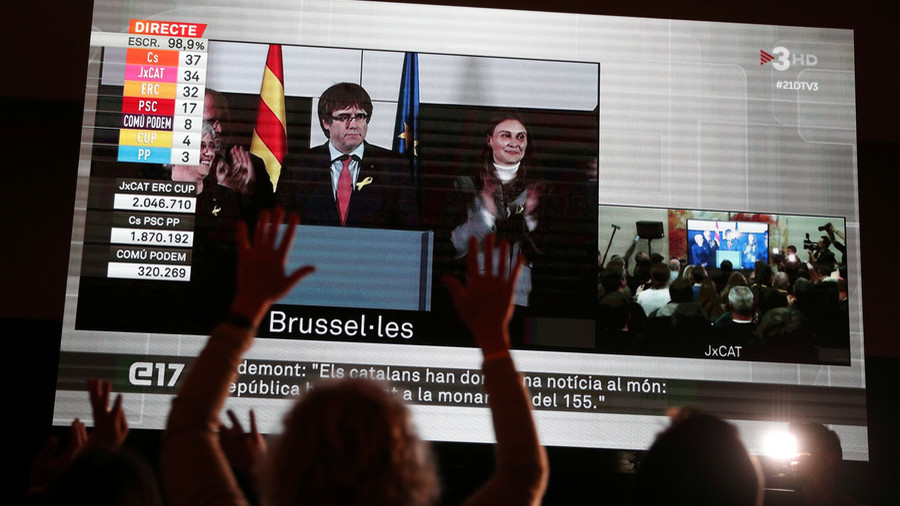 Deposed Catalan president Carles Puigdemont has hailed a victory of democracy, while the leader of pro-unionist Citizens Party has blamed “unfair” laws for their inability to form a majority.

“I want to congratulate the Catalan people, because they have sent a message to the world. The Catalan republic has beaten the monarchy and article 155. The Spanish state has been beaten. Mr Rajoy and his allies have lost,” Puigdemont said from Brussels where he is hiding from Spanish authorities.

“Now we need to restore democracy, restore our legitimate government, our freedoms. We need to free all those people who are still in prison, but should not be,” he added.