The world stands up to Trump's bullying over Jerusalem

Most of the world has stood up to Israel, the zionist entity and American bullying.

See who stood up to America. New Zealand voted 'yes' while Australia and other US puppets abstained 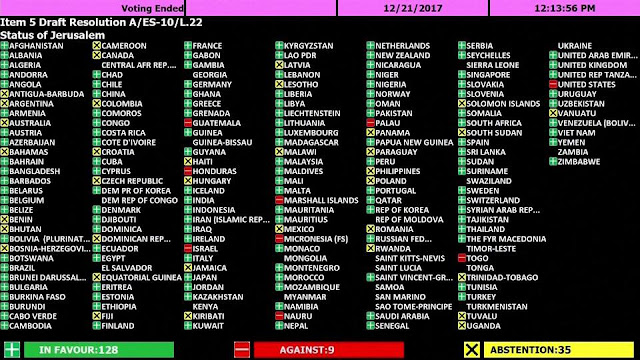 Winston Peters backs NZ vote against US, calling for withdrawal of decision on Jerusalem

New Zealand was one of 128 countries voting in favour of the UN resolution.
ONN 1 News at 6 promo image

The vote was held at the UN General Assembly this morning (NZT) under the shadow of US President Donald Trump threatening to cut off financial aid to those that supported the resolution.

Nine countries voted against the resolution while 35 countries, including Australia and Canada, abstained.

Speaking to the NZ Herald this morning, Mr Peters said he sided with the majority.

"The resolution reflects New Zealand's long-held support for a two-state solution to the conflict.

"The resolution called for the acceleration of efforts to achieve a comprehensive, just and lasing peace in the Middle East.

"This is something we all can support."

Earlier this month, Mr Trump abruptly reversed decades of US policy when he recognised Jerusalem as Israel's capital.

US Ambassador to the UN, Nikki Haley, said that the United States "will be taking names" of countries that vote in favour of a General Assembly resolution declaring that Jerusalem's status can be changed only by direct Israeli-Palestinian negotiations.

"I would push back strongly and say New Zealand has and will always have independent foreign policy.

"We base our decisions on principle, not being bullied."
Posted by seemorerocks at 17:39