Closer look shows we are more vulnerable to ballistic weapons than we think. Here's why. 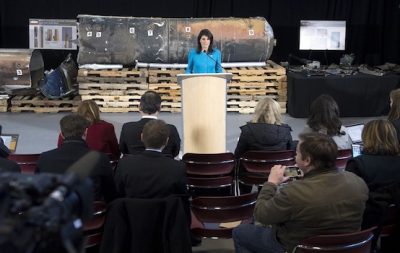 On December 12, America’s Ambassador to the United Nations, Nikki Haley, gave a press conference on the grounds of Joint Base Anacostia-Bolling in Washington, D.C. The subject of this briefing: the threat posed by Iranian-supplied missiles employed by the Houthi rebels of Yemen in their ongoing fight against a Saudi Arabian-led coalition.

As a backdrop for this dramatic presentation, Haley had assembled various components and debris recovered from two previous missile attacks by the Houthi on Saudi Arabian targets.

“If we do nothing about the missiles fired at Saudi Arabia, we will not be able to stop the violence,” Haley warned. “There is clear evidence that the missiles that landed on Saudi Arabia come from Iran,” she said, adding: “The evidence is undeniable. The weapons might as well have had ‘Made in Iran’ stickers all over it.”

The facts of the matter, however, are quite different.

According to Haley, the weapons in question were Iranian-made Qiam-1 missiles, possessing a range of up to 800 kilometers. Haley was parroting the claims of the Saudi Arabian government, which had previously released a press statement about the Houthi missile attacks and their links to Iran. The Commanding General of U.S. Central Command, Lieutenant General Jeffrey Harrigian, backed up the Saudi claims, without providing any new evidence. Haley’s press conference, with its dramatic show and tell, was the first time the Saudi Arabian claims had been backed up by anything remotely resembling proof. Moreover, Haley’s comments were designed to set up a report by a panel of United Nations experts, who had travelled to Saudi Arabia to examine the missile parts in question and ascertain their origin. The findings of that report, scheduled to be released two days after Haley’s press conference, were mixed. “Design characteristics and dimensions of the components,” it read “inspected by the panel are consistent with those reported for the Iranian designed and manufactured Qiam-1 missile.” However, the panel also noted that “as yet has no evidence as to the identity of the broker or supplier.” Haley’s press conference was designed to eliminate any uncertainty on the matter.

A closer look, however, reveals the opposite. Rather than the Iranian-manufactured Qiam-1 missiles Haley and the Saudi Arabian government claimed, the debris presented by Haley were of a modified Soviet-manufactured SCUD-B missile; the airframe and engine are original Soviet-made components, and many of the smaller parts on display bear Cyrillic (i.e., Russian) markings. The transformation to the Burkhan 2-H design required the Houthi engineers to increase the size of the fuel and oxidizer tanks, and lengthen the airframe accordingly. This is done by cutting the airframe, and welding in place the appropriate segments (this also required that the fuel supply pipe, which passes through the oxidizer tank, be similarly lengthened.) The difference in quality between the factory welds and the new welds is readily discernable. The increased fuel supply permits a longer engine burn, which in turn increases the range of the missile. The Burkhan 2-H uses a smaller warhead than the SCUD B; as such, the guidance and control section had been reconfigured to a smaller diameter, and an inter-stage section added to connect the warhead/guidance section with the main airframe.

The warhead of the Burkhan 2-H, unlike the SCUD-B, is designed to separate from the main body of the missile during the final phase of its descent; this aids in accuracy and survivability, since most anti-missile radars (such as that used by the Patriot system used by Saudi Arabia) cannot readily distinguish between the smaller warhead and the larger mass of the airframe, sending the interceptors to the latter while the former falls unimpeded to its target. The bottle-nose shape produced by this smaller warhead, however, increases the missile’s overall drag coefficient, which reduced its range. To compensate for this, the Burkhan 2-H eliminates the tail fins found on the SCUD-B missile. This, however, creates stability and trajectory control issues at launch, for which the Burkhan-2 adjusts for by incorporating a more sensitive and responsive guidance and control system, which in turn is linked to similarly responsive actuators controlling the SCUD-B style jet vanes that steer the missile via thrust vectoring.

The reality is that the Burkhan 2-H is neither a completely indigenously-produced Houthi missile, nor is it an Iranian-manufactured Qiam-1. Instead, the Burkhan 2-H is a Soviet SCUD-B that has been significantly modified using Iranian design concepts and critical components (the guidance and control and thrust vector actuators stand out.) The ability to carry out the necessary modifications is not beyond the technical capability of the Houthi, who have assimilated most of the Yemeni missile engineers under their control. While the design aspect of this modification program appears to be Iranian, the actual technical modifications are more akin to a similar missile modification effort undertaken by Iraq in the 1980’s to 1990’s, where SCUD-B missiles were modified to become the longer-range Al Hussein missile used during the Iran-Iraq War and the Gulf War. Iraq and Yemen had a significant program of cooperation before the Gulf War, where Iraqi missile experts collaborated with their Yemeni counterparts to modify Yemen’s SCUD-B missiles to Al Hussein configuration. Iraq’s defeat at the hands of a US-led coalition, followed by the UN-directed dismantling of its long-range missile program, aborted this effort before it could be consummated, but not before a considerable amount of coordination had taken place, including a survey of the specific engineering resources needed to carry out the necessary modifications.

The missile debris in question actually contradicts the finding of the UN panel, which held that the missiles launched against Saudi Arabia had been transferred to Yemen in pieces and assembled there by Houthi missile engineers; it is clear that the missiles in question had been in the possession of Yemen well before the Saudi Arabian-led intervention of 2015, and that their source was either Soviet or North Korean. The modification kits, on the other hand, appear to be of Iranian origin, and were transported to Yemen via Oman. The UN panel claims not to have any evidence of “external missile specialists” working alongside the Houthi; indeed, the simplicity of the Burkhan 2-H modification concept is such that anyone already familiar with the SCUD-B missile system would be able to implement the required processes without outside assistance.


The fact that what is being discussed is the modification of existing Yemeni missiles, and not the provision of a new missile system, means that the already tenuous claims made by the Saudi Arabian and American governments that the Houthi missile attacks on Saudi Arabia represented a de facto violation of UN Security Council resolution 2231 (and, by extension, the Iran nuclear agreement) simply does not hold water. The entire Saudi-US effort in this regard was little more than a not-so-sophisticated propaganda exercise designed to bolster the Trump administration’s efforts to cobble together some sort of international consensus on doing away with the Iranian nuclear agreement. To this end, the Saudis and their American co-conspirators seem to have had little success.

As bad as that result may have been, it paled in comparison to what this entire charade could not obviate—that there has been little progress, if any, in the capability of nations armed with modern weaponry and advanced intelligence gathering systems to locate and interdict a mobile, relocatable ballistic missile force. The efforts of the Saudi Arabian-led coalition to neutralize the Houthi ballistic missile capability have been a dismal failure—there is no evidence of a single Houthi-controlled mobile missile launcher having been destroyed by coalition forces, despite hundreds of air sorties having been flown for just that purpose. The Houthi have displayed the capability to launch missiles targeting the most sensitive of Saudi Arabia’s political and economic infrastructure at will. Moreover, the unique characteristics of the Burkhan 2-H missile—a small, separating warhead, combined with a reduced radar cross section (by eliminating the tail fins of the SCUD-B) and a more responsive guidance and control system—have made it virtually impossible to intercept using the US-made Patriot anti-missile system. In many ways, the Saudi-led efforts against the Houthi mirrors the Great SCUD Hunt carried out by the United States during the Gulf War, where the Iraqis were able to continue launching missiles against Israel and Saudi Arabia up until the end of the war, without the loss of a single mobile missile launcher. Moreover, the inability of the Patriot missile to successfully intercept Iraqi-modified SCUD missiles seems to be the case today, with Saudi Patriot batteries impotent in the face of the Burkhan 2-H.

If a relatively unsophisticated foe such as the Houthi, using Iranian-modified Soviet and North Korean missiles derived from 40-year-old technology, can evade an enemy force using the most modern combat aircraft backed up by the most sophisticated intelligence gathering systems available, and successfully launch ballistic missiles that threaten the political and economic infrastructure of the targeted state, what does that say about the prospects of any U.S.-led coalition taking on the far more advanced mobile missile threats that exist in North Korea and Iran today? The fact of the matter is that no military anywhere has shown the ability to successfully interdict in any meaningful way a determined opponent armed with mobile ballistic missile capability. If the Saudi experience in Yemen is to teach us anything, it is that any military plan designed to confront nations such as North Korea, Iran and Russia that are armed with sophisticated mobile ballistic missiles had better count on those capabilities remaining intact throughout any anticipated period of hostility. No amount of chest-thumping and empty rhetoric by American political and/or military leaders can offset this harsh reality. This is the critical lesson of Yemen, and the United States would do well to heed it before it tries to foment a crisis based upon trumped-up charges.

Scott Ritter is a former Marine Corps intelligence officer who served in the former Soviet Union implementing arms control treaties, in the Persian Gulf during Operation Desert Storm, and in Iraq overseeing the disarmament of WMD. He is the author of Deal of the Century: How Iran Blocked the West’s Road to War (Clarity Press, 2017).