Is the Iranian government collapsing? I hope not!

Even if his biases are clear at least Hal Turner is, in my opinion, aware of what might be at stake.

I hope to God that he is wrong. Let this be fake news! 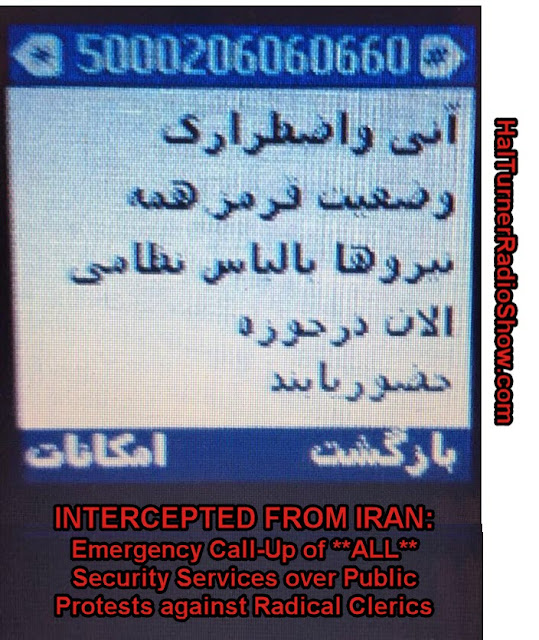 The government of Iran is nearing collapse as massive public protests have erupted nationwide against radical Islamic Clerics who run the country.  This afternoon, covert Intelligence Systems intercepted a nationwide SMS Message sent to all Military and Security Services which read:

"Emergency - Code Red - All forces in military uniform report in to their respective areas."
An image of the SMS message is shown above.
For the Iranian government to do something like this is an act of desperation.   They already **know** they've long-ago-lost the support of the public.  Now, they're losing CONTROL of the public.
The only question remaining is whether they will begin using military force to stop the public protests?
This situation is developing very rapidly and events are unfolding with lightning speed.
It is possible, even likely, the government of Iran will collapse within days, and the nation will return to the peaceful, intelligent, secular society it once was.
There is fear in the Intelligence Community that, as a final act of desperation, Iran could launch multiple massive missile barrages against several countries in the Middle East: Israel and Saudi Arabia chief among those.
If that takes place, war will break out almost immediately and plunge the region -- and the world -- into an abyss.
For those with a Biblical slant, we're talking "Gog / Magog" type of trouble!  Not familiar with that?  Look it up.
Hint: Armageddon
Biblical prophecy anyone?