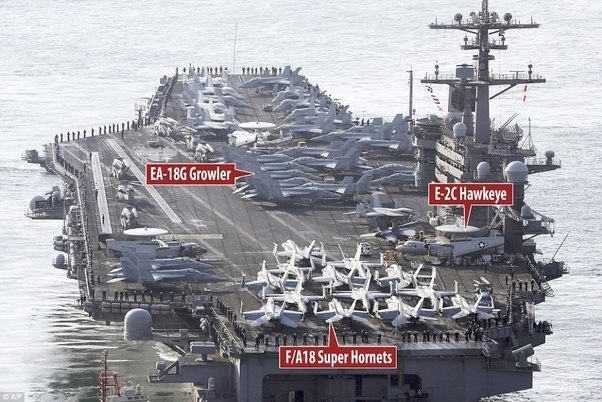 
An article in the British newspaper the Daily Telegraph is reporting that the US is now very close to deciding on a list of options for military strikes against North Korea.


………this newspaper talked to around a dozen current and former officials in America and Britain about policy towards North Korea.   The conversations show that the Trump administration is more willing to consider military options to end the conflict than widely assumed.

The White House has “dramatically” stepped up preparation for a military solution in recent months amid fears diplomacy is not working, well-placed sources said.

One option is destroying a launch site before it is used by the regime for a new missile test. Stockpiles of weapons could also be targeted.

The hope is that military force would show Kim Jong-un that America is “serious” about stopping further nuclear development and trigger negotiations.

Three sources – two former US officials familiar with current thinking and a third figure in the administration – confirmed military options were being worked up.

“The Pentagon is trying to find options that would allow them to punch the North Koreans in the nose, get their attention and show that we’re serious”, said one former US security official briefed on policy.

The article also makes it fairly clear who the principal hardliner pressing for military action against North Korea is, as well as growing British alarm at the war talk in Washington

“Those who heard them left with the impression that military action is very much an option they were considering seriously.”…..

British officials are continuing to urge their US counterparts to focus on diplomatic solutions and are looking to increase pressure on North Korea.

That General H.R. McMaster appears to be at the centre of the attack planning in Washington and seems to be the leading advocate of a military strike on North Korea will come as no surprise to anyone.

In parenthesis, I would add that when General McMaster replaced General Flynn as President Trump’s National Security Adviser back in February the US’s European allies breathed a collective sigh of relief.  One wonders whether anyone in Europe is now having second thoughts?

Putting this aside, how much credence is to be given to the Daily Telegraph’s story?
Firstly, there are too many reports coming out of Washington discussing possible military action against North Korea to leave any doubt that serious preparations for a military strike on North Korea are indeed underway.

There is also no doubt about the growing frustration in Washington at the US’s inability to bring North Korea’s ballistic missile and nuclear weapons programme to a stop and at China’s refusal to impose an oil embargo on North Korea.

The Daily Telegraph article admits that North Korea’s ballistic missile and nuclear weapons programme has advanced much faster than anyone in Washington expected, and that this has left the US struggling to come up with a response

Pressure to act comes from the drop in estimated time it will take for North Korea to develop a missile that could hit America with nuclear weapons.  Just a few years ago it was believed the regime was a decade away from that point, but now the figure has dropped to as little as 18 months – though estimates vary.  Senior figures in the Trump administration have made clear in public that it would be unacceptable for North Korea to reach that position.

Experts also say there is a split in the US administration with Mr Trump and Mr McMaster more willing to consider military action than Rex Tillerson, the secretary of state, and Jim Mattis, the defence secretary.

In such a situation it is no surprise that there is active planning in Washington for a strike on North Korea, and that Washington has split into ‘hawks’ and ‘doves’ ie. between advocates and opponents of military action.  Indeed this is the classic situation in Washington whenever the US finds itself in confrontation with another country, and it is one which has repeated itself on numerous occasions since the start of the Cold War.

It is however likely that behind all this war talk there is a strong element of bluff.

With the US apparently incapable of making any concessions that might open the way for talks with North Korea – eg. by accepting the Chinese proposal for a ‘double freeze’ (a cessation of US military exercises in the Korean Peninsula in return for a suspension by North Korea of its ballistic missile and nuclear weapons programme) – the strong possibility must exist that articles like the one in the Daily Telegraph are being deliberately leaked to the media in order to scare China into ramping up pressure on North Korea by imposing an oil embargo on the country.

I say this because I still find it very difficult to believe that the US seriously intends a military strike against North Korea which every serious analyst I know of considers both extremely risky and likely to be completely ineffective, and which is opposed by both the Secretaries of State and Defense.

It is not after all as if there has ever been an occasion in the past when the US has attacked a country which possess nuclear weapons.  Would it really take on itself the enormous risk of doing so against a country as unpredictable as North Korea?
Having said this the danger in all this war talk and in all this planning is that beyond a certain point it starts to acquire its own dynamic.

It is very easy to see how as the North Korean ballistic missile and nuclear weapons programme gathers pace pressure in Washington for a US strike on North Korea might increase.  If it appears that there is an option for a strike on the table, then that pressure would increase still more.

Needless to say the risks involved in such a strike are colossal and I cannot imagine anything that might alarm and anger China more.  However when people of war instead of peace war is what tends to happen.