Trump denies thare is a drought in Calfornia

Trump represents nothing more nor less than the insanity that has overtaken America taken to its illogical conclusilion.

We are living in the age of consequences.

Trump Humiliates Himself By Claiming That There Is No Drought In California
Donald Trump humiliated himself by claiming that the California drought doesn't exist and that he will solve the state's problems by turning the water back on. 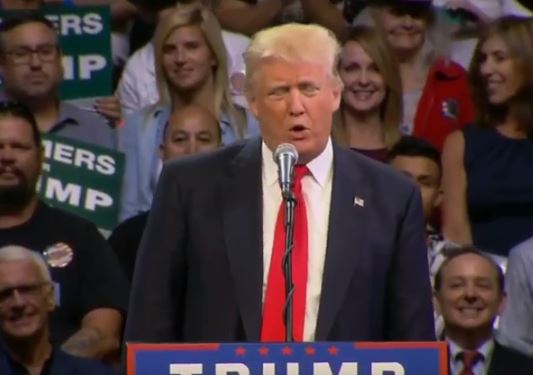 Donald Trump humiliated himself by claiming that the California drought doesn’t exist and that he will solve the state’s problems by turning the water back on.

“We’re going to solve your water problem. You have a water problem that is so insane. It is so ridiculous where they’re taking the water and shoving it out to sea…They don’t understand — nobody understands it. There is no drought.

I have received many many environmental rewards. Rewards and awards. I have done very well environmentally, and I’m all for it, but you have some people that really just wanna get in the way, and I don’t know if it’s for their ego or what. But you know we want jobs, we have to bring jobs back, and if we can bring this part of the world water that we have, but it’s true I’ve gotten so many of the awards and I am proud of them, and there are some great environmentalists….If I win, we’re going to start opening up the water, so that you can have your farmers survive.

According to Trump, the drought is a conspiracy from environmentalists that he will solve simply by “turning the water back on to the farms.” Unless Donald Trump has a secret weather machine, the only thing that can solve California’s water issues is more rain.
Donald Trump like the rest of the members of his party is trying to pass off denial as a public policy. Pretending that the drought doesn’t exist is not a solution. The fact that his supporters in Fresno, CA ate up Trump’s rambling non-solution suggests how deeply the culture of believe it until it is true has infested the Republican Party.
If Republicans just believe in Trump, all of their troubles will vanish. They will wake up the day after Trump takes office, and everything will be great. This is the message that Trump is selling on the campaign trail. For anyone who isn’t a believer in the Trump fairytale, the idea that there is no drought in California is insane.
The notion that Trump can flip a switch and fix everything is even crazier, but it also perfectly explains why Republicans have made him their nominee. Republicans are still looking for a quick fix. They don’t want to confront the tough questions. To the rest of the country, Trump is a humiliating embarrassment, but for Republicans, he is their quick fix savior.
What Donald Trump is really doing is embarrassing himself and the people of the United States of America.