My gut feeling is that Clinton's email midemeanours will be overlooked  (along with her corruption and war crimes) and the Establishment will choose her as the candidate to lose against Trump.

With eight days to go before the final round of presidential primaries, Vermont Senator Bernie Sanders reiterated his pledge to support Hillary Clinton if she prevails in the campaign for the Democratic nomination.


In an interview recorded Saturday and broadcast on NBC’s “Meet the Press” program Sunday, Sanders repeatedly declared that his top priority was to ensure the defeat of the presumptive Republican presidential nominee Donald Trump.

In response to a question from interviewer Chuck Todd about whether he had a responsibility to ensure his supporters voted for Clinton if she wins the nomination, Sanders said, “The responsibility that I accept in a very, very serious way is to do everything that I can to make sure that Donald Trump will not become elected president of the United States. Donald Trump, for a dozen different reasons, would be a disaster as president. I will do everything that I can to make sure that does not happen.”
Todd pressed him to discuss his “responsibility to do what it takes to bring your supporters onboard with her. Do you accept that responsibility?” The interviewer continued, “You just said you want to do whatever it takes to stop him. You don’t believe you need to be out there telling your supporters, ‘You may not be happy with Hillary Clinton, but she’s better than him’?”
Sanders replied, “Well, no question about that. No question about that. But where my mind is right now is to do everything that I can in the remaining caucuses and primaries to try to win them and make the case. But if your question is do I think that Secretary Clinton is significantly a better candidate for America than is Donald Trump, that is not a debate. Of course that is true.”
This response was a clear signal of the two-track policy that Sanders is carrying out in the final stages of the Democratic primary campaign. He has issued a series of protests and demands over the organization of the Democratic National Convention in Philadelphia, combined with reassurances of his support for the eventual nominee, presumed to be Clinton.


Including pledged “super delegates,” Clinton is expected to reach the 2,383 delegates required for nomination when polls close in New Jersey June 7, the first of six states to hold primaries or caucuses that day. At least one cable network, MSNBC, has indicated it will project a Clinton victory in the overall nomination contest even before polls have closed in states further west, including California, which accounts for 475 of the 684 delegates to be awarded June 7.
On Friday, the Sanders campaign sent a letter to party officials demanding the replacement of the Clinton campaign’s choices to head the rules committee and the platform committee, former Representative Barney Frank and Connecticut Governor Daneel Malloy, with more neutral figures. This was flatly rejected, although Democratic National Committee Chair Debbie Wassermann Schultz did agree to name five top Sanders delegates, including Cornel West and James Zogby, to the platform committee.
While media commentators have presented Sanders’ pledge to continue his campaign right up to the convention as a defiant challenge to Clinton, there is another explanation for the series of demands and apparent displays of intransigence: Sanders is seeking to keep the attention of his own supporters focused on the Democratic convention, even after Clinton clinches the nomination.
He is seeking to foster the illusion that the July convention in Philadelphia, an assemblage of political hacks and representatives of corporate America, will be responsive to the left-wing sentiments of the youth and working people who have rallied in support of Sanders.
Some 10 million people have voted for Sanders in the Democratic primaries and caucuses, a shift in popular consciousness which has taken the entire two-party political establishment—including Sanders himself—and the corporate-controlled media by surprise.
The endgame in the campaign for the Democratic presidential nomination is how to contain this leftward movement within safe channels, by delivering Sanders supporters, who are overwhelmingly hostile to the Wall Street politics and warmongering with which Hillary Clinton is identified, into Clinton’s grasp.
Sanders has more or less openly advised the Clinton campaign that they need to make concessions on the platform and in naming a vice presidential running mate if he is to be able to control the revulsion among his supporters to a Clinton nomination.
In response to further questions on Meet the Press, Sanders said, “I would hope, if I am not the nominee, that the vice presidential candidate will not be from Wall Street, will be somebody who has a history of standing up and fighting for working families, taking on the drug companies whose greed is doing so much harm, taking on Wall Street, taking on corporate America, and fight for a government that works for all of us, not just the one percent.”
Given several opportunities to deny any interest in being that vice presidential candidate, Sanders only repeated, “Right now, my focus is on winning the nomination,” leaving Todd to conclude, “Fair enough, you’re not ruling it out.”
The Clinton campaign was staggered this week by a State Department inspector-general’s report assailing her use of a private email server throughout her four years as Secretary of State in the Obama administration, and by polls showing her virtually tied with Sanders in California.
If Clinton loses California, along with Montana, South Dakota, North Dakota and New Mexico on June 7, winning only New Jersey, she will have lost 16 of the final 23 states to hold primaries or caucuses, the worst-ever showing of any victorious candidate for a Democratic or Republican presidential nomination—if she ends up getting the nomination.
The Democratic political establishment is bending all its efforts to dragging Clinton across the finish line. Appearing on the ABC Sunday interview program “This Week,” Senator Diane Feinstein of California denounced suggestions that the email scandal could derail Clinton’s nomination. She said of Sanders, “He ought to be able to read the signposts as well as anybody else. And if he did that he would know that it’s all but over.”
Feinstein was in effect dismissing the right of voters in her own state, whose primary is nine days away, to participate in the selection of a nominee—an indication of the contempt for democratic rights that prevails throughout the US ruling elite and its political representatives.

This is from a week ago 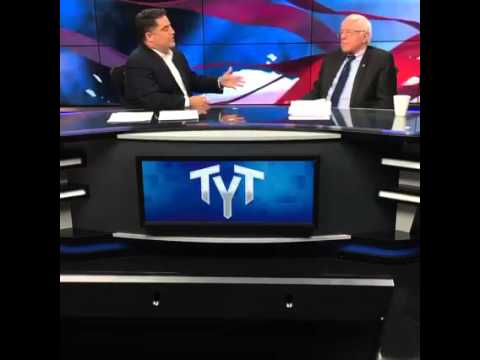 Cenk Uygur over at the Young Turks had the interview of a lifetime. He just interviewed Bernie Sanders, and it was a mind-blower.

“Now, a lot of the people in the movement have decided that you are their leader, partly because you’re running for President, but you look at some recent polls of millennials, they have you by far the most popular politician; but they actually have you as more popular as a person they’d like to meet above Beyonce`, okay that’s a hell of a thing…

Bernie’s answer was gold, and left things up in the air on whether he would back Hillary or go his own way…

Well.. what I say: Number one I’m not that big into being a “leader”… I’d much rather prefer to see a lot of leaders and a lot of grassroots activism.

Number two, what we do is together, as a nation .. as a growing movement is we say: “If we don’t win..” and by the way we are in this thing to win, please understand that. “What is the Democratic establishment gonna do for us?”

From this exchange we can surmise that there’s no guarantee that he will blindly back the Democratic Party’s candidate if we get nothing out of doing so.
Depending on how things look in July,  an Independent run could be in the works. He’s said he probably wouldn’t consider it – but that was months ago.That was before this got messy.
It was before millions of people were disenfranchised in Arizona and likely will be in future contests. It was before Bill Clinton started showing up at polling places in Massachusetts and Illinois blocking traffic, and delaying voters from getting to the polls. The more people that are cast aside during this election, the more angry we as a movement get.. and the more angry Bernie gets..if it keeps going like this there will be a fever pitch where we all going to band together and “Bern down” the establishment together.
If Trump wins the nomination, it’s likely that Republicans might throw in a third party candidate, or if there’s a brokered convention and Trump loses even though he has a majority of the delegates – he may run as an Independent. If it’s Hillary Clinton facing two right wing candidates, Bernie would stand a lot better chance. Some are even saying that if it’s between Trump and Hillary that both candidates have such low favorability ratings that Bernie Sanders could still win against the both of them.
When asked whether he really believes that Hillary Clinton would keep any of her promises that she’s made since Iowa when she switched up her whole platform, he said basically that it’s very doubtful. You can see her thinking prematurely that she’s already won, and already she’s moving back to center on the issues.
People see her dishonesty, and only her die hard supporters don’t see through it.
Bernie quoted Tom Donahue head of the Chamber of Commerce who said: “Don’t worry what she said in the campaign, she’s just trying to match Bernie Sanders. If she’s elected, I think she’ll be okay on the TPP”.
Watch the full interview below (by the way the part about whether he’d back the establishment candidate or not is around the 16 minute mark).


In contrast, Hillary Clinton according to Real Clear Politics now loses to Donald Trump by .2 points

WILL BERNIE CAUSE HILLARY TO LOSE THE ELECTION?
*****


There is nothing like a bit of historical context.

Rather than seeing things as one would wish them to be it might be owrthwhile contemplating the possibility of betrayal of people’s aspirations.

Based on precedent that seems the most likely outcome.

Here is a documentary on the 1968 Democratic Party convention.